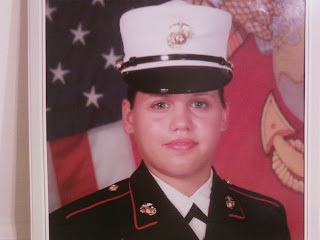 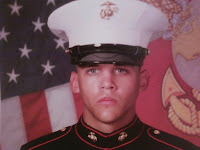 Carried side by side in the womb, Sergeant Simone Mercedes and Corporal Sonny Powers, were born in Houma, Louisiana, but raised in the Metro Atlanta area. Today, they proudly, serve in the USMC. Mercedes and Powers are the youngest of five. The family faced and overcame many challenges in their young lives.  Both are Christian, with a love for God, family, and country.
Each had decided early on, that he/she wanted to do something positive with his/her life. They seemed to challenge each other to do his/her best.  The Bible says, "iron sharpens iron," which is something they have done for each other.
Their brothers, Stephen and Shawn reside in the Metro Atlanta area, as well as their sister, Stacie, along with nieces and nephews. Stepbrother Damioin and stepsister, Destani reside in South Georgia.
Sgt. Mercedes just celebrated five years of service in the United States Marine Corps, where she served two tours, one in Iraq, another in Afghanistan, and is currently stationed in Japan. She will be returning to the Metro Atlanta area, for some rest and relaxation with family and friends, before returning to Japan to complete her two years, with her new husband.
On April 4, she became the wife of Staff Sergeant Julio Mercedes, who she met while serving. He joined the Marine Corps in response to 9/11, giving up a successful career to serve. They hope to have the big wedding she’s always dreamed of, once they return stateside, which they were unable to do as a result of  their current orders.
Cpl. Sonny Powers, on the other hand joined the Marine Corps, just over two years. Stationed in Twenty-Nine Palms, he is currently on a tour of four countries aboard a Navy Ship.
He had begun his college career to become a teacher and wrestling coach. The decision to do so came after he enjoyed a successful high school wrestling career, with his twin, Mercedes, serving as a manager for the team. His career path changed, as he answered the call to serve in the United States Marine Corps, instead.
She was the inspiration for the poem, “My Child, My Marine!.” The poem can be found by following the link below:
http://www.associatedcontent.com/article/6156530/my_child_my_marine.html?cat=10
The poem Cpl. Powers inspired can be found by following the link below, as well:
http://www.associatedcontent.com/article/8100191/the_heart_of_a_us_marines_mom.html?cat=7
VISIT DIANE LANDRY'S WEBSITE HERE