The first time I heard Leah Rose Fisher sing the Lord's Prayer in Aramaic, it was absolutely stunning as well as inspiring. Aramaic is the authentic language of the Bible, which Jesus actually spoke. The movie "Passion of the Christ" is 100% in Aramaic.

Even more impressive, speaking of things Biblical, Leah is of Assyrian descent. If the word Assyrian sounds familiar, it should. The prophet Jonah was sent to Nineveh, as recorded in the Old Testament, to preach repentance and forgiveness. Modern day Mosul in Iraq, was once Assyria. That area in what has been called Iraq for a century became Christians, and remained Christian for almost 2000 years. This was, however, before the diaspora brought on an Exodus that went all over the world. I have spoke to Americans of Assyrian descent from came to America from Iran, Iraq and other places.

Leah was born in Louisiana and now based in the tri-state New York area. According to her website, she is a New York City based singer, voice teacher, and performing artist. She attended New York University where she graduated with a Masters in Vocal Performance in Classical Voice and an Advanced Certificate in Vocal Pedagogy. She was honored to receive the 2013 NYU Vocal Pedagogy Award in recognition of outstanding achievement in vocal pedagogy. She currently studies in the studio of Dr. Brian Gill. Leah received a B.A. in Music and a B.A. in French at Centenary College of Louisiana where she studied in the voice studio of Dr. Gale Odom. Leah has also appeared in the popular CHOSEN series, which will be entering its Third Season very soon.

Listen to her rendition of the amazing Lord's Prayer in Aramaic here: 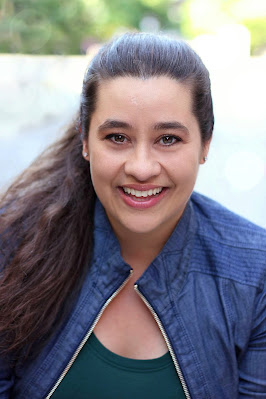 DIARY OF PERPETUA IN GLENVIEW IL THIS WEEKEND 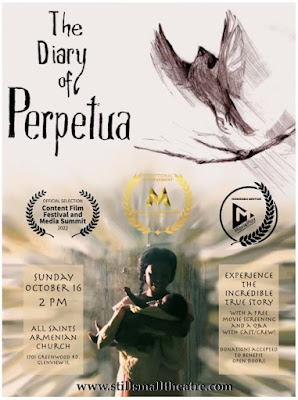 Still Small Theatre is a small but very impactful troupe of talented artists, actors, actresses and musicians of all races, backgrounds and ethnic origins. Founded in 2012, the Troupe is based in Beverly, Massachusetts and are currently doing targeted tours around the United States to showcase their projects...in this case "The Diary of Perpetua".
Perpetua was a rich Roman noblewoman who became a Christian and was martyred for her faith in Jesus Christ at the very young age of 22 (born 181, died 203). We know about her from her diary which once inspired the Great Christian church Father Augustine, to preach four sermons about her!
VISIT THE STILL SMALL THEATRE TROUPE WEBSITE HERE.
My friend and sister in Christ Leah Fisher is  part of this group which will be coming to the All Saints Armenian Church on Sunday October 16 for a screening and Q & A about this inspiring production.
Click on the link above for more information and list of upcoming events.
OTHER LINKS:
www.stillsmalltheatre.com
www.facebook.com/stillsmalltheatre
www.instagram.com/stillsmalltheatre
Posted by The Bernie Lutchman Blog at 10/15/2022 No comments:

Email ThisBlogThis!Share to TwitterShare to FacebookShare to Pinterest
Labels: ACTION, be intentional, be on the alert, faith without works, Holiness, keys to the kingdom, purpose

THE FIRST KEYS TO THE KINGDOM

INTRODUCTION TO 1 PETER AND THE KEYS TO THE KINGDOM

FOUR DISCIPLINES OF A GODLY MAN

Email ThisBlogThis!Share to TwitterShare to FacebookShare to Pinterest
Labels: begin with the end in mind, end times, give it to God, hopeful, living with purpose, optimistic, Psalm 46
Older Posts Home
Subscribe to: Posts (Atom)