HOW THE BOOK OF JOB COMPLETES GENESIS CREATION ACCOUNT!

It is more and more evident that the Book of Job is actually the first book of the Bible! He lived closer to Creation, about 6000 years ago, than either Abraham or Moses who wrote the original account of Creation.  Chapters 38 – 40 of the Book of Job fleshes out several of the major parts of Creation that the Holy Spirit mentioned in passing in Genesis 1 and 2!
There is a reason this BMIC website carries Daily Updates from ANSWERS IN GENESIS – led by the wonderful prophet KEN HAM who is the leading messenger from God on Creation and WHY the Belief in Creation (some have called it “Intelligent Design“) is important to not just Christians…but our children! They are the ones being brainwashed into the ungodly theory of Evolution day after day, year and year from kindergarden through college, while our churches are asleep at the wheel and practicing “Church Growth”!!Every chance we get, we bring the teaching of How God Created This World and why Genesis and JOB – a real gem on Creation – are so important. This is my reasoning for posting this video from a teaching I did on that topic some time ago.

Posted by The Bernie Lutchman Blog at 12/30/2010 No comments: Links to this post

HOW DID WE GET THE BIBLE WE HAVE TODAY? WATCH THIS!

Today, we're losing our young people right out of Sunday School! I don't mean Adult School...am talking about Junior HS Sunday School classes in our so-called Bible-preaching churches!! Survey after survey, from multiple sources like George Barna and the Pew Center on Religion...added to an in depth study by Ken Ham resulted in the scariest book of the past two years - ALREADY GONE.

If there is a book that should shake up church leadership everywhere, it's this one! We're losing our children from as young as 8th grade permanently (for the most part) to the secular world because they have no relationship to the Word of God, therefore they don't believe it's true! We have them in church for one hour a week, the world and evolution and Satan has them the rest of the week! Who do you think will win this battle?!
This short TV show (about 27 mins), which is from one of my earliest programs briefly addresses how we got the physical writings of Scripture. It is up to us the rest of the time to teach the young ones the rest of the story for the 18 plus years we have them in our homes, under our wings.
WE MUST DISCIPLE THEM!
----------
THIS IS FROM "PLUMBLINE" - Channel 4, Springfield, Illinois, 2008.

Posted by The Bernie Lutchman Blog at 12/26/2010 No comments: Links to this post

Posted by The Bernie Lutchman Blog at 12/23/2010 No comments: Links to this post

Jamal Rashmawy and his wife Afaf are both from the land of the Bible - Bethlehem Ephrathah - where the House of David began. Here is speaks at the annual Christmas Men's Breakfast at Springfield Bible Church, Springfield, Illinois on Saturday December 18, 2011. This is a wonderful message of hope and Christ, from a man who grew up where "shepherds watched their flocks by night"!!

Posted by The Bernie Lutchman Blog at 12/21/2010 No comments: Links to this post

On November 30, I was humbled with the honor to open the 3rd Annual Nativity Scene in the Illinois State Capitol building. This state is the only of all 50 states to have a Nativity Scene representing the Lord Jesus INSIDE its Capitol! I represent Business Men in Christ on this Springfield Nativity Scene Committee which is headed up by Dan and Julie Zanoza. The Illinois Family Institute, The Thomas More Society and Beth Rogers are also on this committee with us here in Springfield.

Posted by The Bernie Lutchman Blog at 12/17/2010 No comments: Links to this post

BRUCE HAS WRITTEN THE FOREWORD FOR MY UPCOMING EBOOK "DANGER ZONE"

THE MOST CRITICAL AND TIMELY MESSAGE YOU WILL HEAR THIS WEEK ABOUT THE DANGERS WE FACE IN AMERICA AND WHAT GOD EXPECTS FROM US!

THIS IS A TIMELY PROPHETIC MESSAGE FOR AMERICA!
Posted by The Bernie Lutchman Blog at 12/15/2010 No comments: Links to this post

THIS IS GREAT FUN AND PRACTICAL FAITH - DISCIPLESHIP REALITY GAME


This reality game aims to provide a mini experience of the discipleship journey, from ‘baby stage' to adulthood. Some of it is fun, and lighthearted, as it is designed for all ages. It is a lot about getting to know each other. There is a memory verse to learn as you go - each stage has a piece of it.

REPORT BACK to everyone - recorder/ spokesperson answering "What did the group get out of it?" - added comments from group are OK depending on the time available...

Posted by The Bernie Lutchman Blog at 12/05/2010 No comments: Links to this post 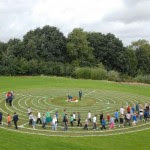 This labyrinth is not the one from Greek mythology, but made to look like the Cross, with four quadrants. The ancient Incas had fire altars in the middle of their labyrinths...and you know why!
What is it with some who profess Christianity in the US and their fascination with Labyrinths? As if forays into Eastern mysticism, “Christian” yoga, Tau crosses and the like are not enough, there seems to be increasing interest in the ancient Labyrinths as a tool for “contemplative prayer”.
By the way, contemplative prayer borders on mysticism and has Zen Buddhist characteristics…the opposite of Biblical Christianity. This is a controversial statement and will get me a lot of flack, but popular female speaker/author Beth Moore is fast becoming the leading proponent of this type of unbiblical “centering prayer”. This is a topic for another time.
There is a connection between contemplative prayer and the labyrinth, which has pagan origins. Just briefly, here are the facts on these origins.  According to Wikipedia and other sources “The first labyrinth originated in Greek mythology, where it was an elaborate structure constructed for  King Minos of Crete and designed by the legendary artificerDaedalus to hold the Minotaur, a creature that was half man and half bull and which was eventually killed by the Athenian hero Theseus. Theseus was aided by Ariadne, who provided him with a fateful thread to wind his way back again, a clue to the single path of the labyrinth.[1] Labyrinths were also used as spiritual aides in ancient Egypt, Peru, and India”.
This could only work with the heretical practice of contemplative prayer. Here are the accepted guidelines for what they called “centering prayer” which accompanies the labyrinth walker in his/her journey to who know where: 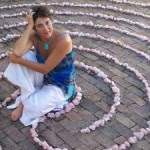 This is the Zen or New Age version of the labyrinth.
Choose a sacred word as the symbol of your intention to consent to God’s Presence and Action within.
Sitting comfortably and with eyes closed, settle briefly and silently introduce the sacred word as the symbol of your consent to God’s Presence and action within.
When engaged with our thoughts, return ever-so-gently to the sacred word.
At the end of the prayer period, remain in silence with eyes closed for a couple of minutes.
(Source: http://www.kyrie.com/)
Does anyone see the Name of Jesus Christ here??!!! And how did this pagan thing creep into western Christendom. Actually it was somewhat innocent at first (to be kind). During the Crusades, it became unsafe (and too expensive) for folks to make Pilgrimage to Jerusalem. So the Roman Church sent up labyrinths in the Notre Dame Cathedral in France etc and divided the pagan concept into Four Quadrants to resemble a Cross. That way, the person who is praying could experience the never-ending path of Grace to and from the center of the labyrinth.
Locally, there are two labyrinths – the Unitarian assembly close to Toronto Road and Jubilee Farm in Berlin, Illinois. The one church that had a labyrinth INSIDE of its building was the now-defunct Judson Baptist Church in Chatham. This is now, fittingly, a hindu temple! 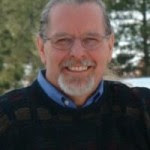 Mystic writer on new age spirituality Richard Foster
The purpose of this brief introduction to the deception of those who promote labyrinths and contemplative prayer as a way to “feel closer to God” is to get concerned Christians thinking, researching, reading and investigating like the Bereans to what the Word of God – THE BIBLE – says and demands on these things. The shocking list of modern church celebrities who are promoting this type of “praying” is stunning. It is not just Beth Moore, whose materials will never appear in my house anymore. Max Lucado, Dallas Willard, Richard Foster head up a list people along with the magazine Christianity Today that are leading star-struck Christians down the wrong garden path!
Finally, one does not need to center (or work) oneself into “engaging with my thoughts”. A real and truly transformed Christian already has the Holy Spirit of Christ living in us, and need nothing more than total surrender to His Will, His Word and His Work. For the man and woman of God – so you wish to get closer to God? Well go to Psalm 1…and contemplate that! Amein.
(images courtesy Google Images) 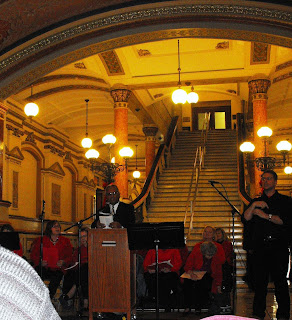 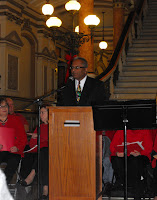 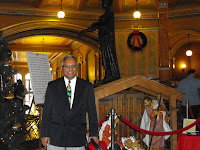 Tuesday November 30 was a special day here in the Capitol City of Illinois - Springfield! We were blessed with the constitutional freedom to gather INSIDE the State Capitol Building and celebrate the Savior and Launch the 3rd Annual Springfield Nativity Scene in the Rotunda! 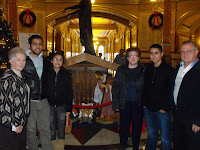 There were heavenly voices from a choir in Villa Park, Illinois and powerful speeches delivered by Dave Smith (Illinois Family Institute); Beth Rogers on the Illinois Constitution and a testimony about the Life of Christ.

Our hearts and prayers go out to brother Dan Zanoza, the energy and chairman of the SNS Committee and his lovely wife, Julie. The Zanozas live in Lincoln, Il.
I was blessed to be asked to do the Invocation and read the Powerful Prophesies of Isaiah 9:6-7 about the Savior to be born in Bethlehem Ephratah (see Micah 5-2) before praying.

CLICK HERE to see a beautiful video piece from the local FOX TV affiliate Fox55 WRSP, from the Ceremony on November 30.