Posted by The Bernie Lutchman Blog at 7/30/2010 No comments: Links to this post

ON BECOMING A MINISTER OF THE GOSPEL OF THE LORD JESUS

The Spirit of the Lord GOD is upon me, because the LORD has anointed me to bring good news to the poor; he has sent me to bind up the brokenhearted, to proclaim liberty to the captives, and the opening of the prison to those who are bound. Isaiah 61:1 ESV 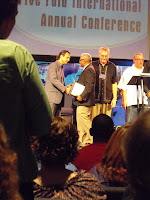 IT WAS A HUMBLING HONOR TO BECOME AN OFFICIAL MINISTER OF THE LORD JESUS ON SUNDAY JULY 25, 2010 AT A SPIRIT-FILLED WEEKEND @ iWORSHIP CENTER, SPRINGFIELD, ILLINOIS DURING THE FIVE FOLD INTERNATIONAL CONFERENCE. 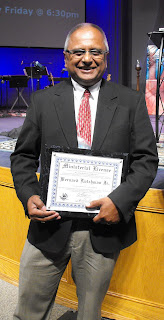 The dictionary describes a Minister as someone who can conduct religious worship, weddings, funerals etc. But what does the Bible think a minister is? Since the Cross, ministers are In New Testament can conduct civil ceremonies...or weddings etc... (Romans 13:4; Romans 13:6), or sacred as the Aaronic priests were (Hebrews 10:11) and as Christ was (Hebrews 8:2). Christians also minister to the poor (Romans 15:27; 2 Corinthians 9:12). This is an expansion of the minister of (the Levitical priesthood) of the Old Testament, which was for a selected Jewish group only!

Because of Christ, we are all ministers! Everything changed at the Cross. We live in a new paradigm. I am not talking about pastors or prophets or evangelists...am talking about ministers. We are God's and Christ's advance men and women in the Kingdom to reach, comfort and bring others to Elohim.We are to be like Christ in Isaiah 61:1!!
While some are officially called and certified in the eyes of Caesar, each one of us have that anointing as confirmed here "But you are a chosen race, a royal priesthood, a holy nation, a people for his own possession, that you may proclaim the excellencies of him who called you out of darkness into his marvelous light....1 Peter 2:9 (ESV)

Posted by The Bernie Lutchman Blog at 7/30/2010 No comments: Links to this post

"REND YOUR HEART"...or Don't be a hypocrite!

"Rend your hearts and not your garments." Return to the LORD your God, for he is gracious and merciful, slow to anger, and abounding in steadfast love.'...Joel 2:13 (ESV). 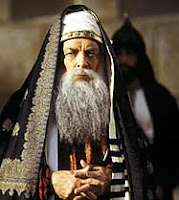 Leviticus 21:10 carries the command from God which says the High Priest of Jerusalem should NOT tear his clothes and keep himself up to mark in appearance. But in Matthew 26:65, the obtuse Caiaphas proceeded to do just precisely the same thing, when he accused Jesus of "blasphemy".
It is a known fact that some of the Pharisees used to wear pre-torn garments to make it appear they were outraged about something, or even, super-religious. John 19:23-24 carries the account of the Roman soldiers dividing up Jesus' clothing after they executed Him (to fulfill Scripture). One thing stood out - His seamless, full length undergarment. This one they left intact.  Clothing had special significance in Bible times and Jesus' inner garment had no pretear and in fact was the tunic of a High Priest! (He is our High Priest and ever lives to make intercession for us.)
Again, this fact alone show Christ to be the embodiment AND the fulfillment of the Law....while hypocrites violate it. Joel 2 is a directive from Holy God to"kawrah" or tear up your own heart or come broken hearted with your sin or shortcoming before the Lord...and He will be merciful.


In other words - don't be a show-boating hypocrite like Caiaphas, simply and humbly stand before Him, who loves you and is full of Grace!

Evangelist and America's premier multi-media prayer warrior - Bill Keller of St. Petersburg, Florida has had enough. After reading about the three storey mosque, set to be erected just minutes away from America's greatest tragedy (the terrorist attack on the World Trade Center on September 11, 2001), Bill went to the Lord in Prayer and sought Discernment.
When he arose from the Throne Room of Christ, he was already given the concept of the 9-11 Christian Center. It will not be a church, but a prayer center for those who wish to go in and prayer to the One True God, and our Lord and Savior - Jesus Christ, as we remember not just those lost on 9/11 but as a point of intercession for this great Experiment in Freedom - America!
Click here for more information on the 9-11 Christian Center at Ground Zero.

Posted by The Bernie Lutchman Blog at 7/12/2010 No comments: Links to this post