Supposed Christian and teen "role model" Miley Cyrus has spoken out on the Miss California/Miss USA 2009 controversy.....and has chosen to come down on the side of those who ridicule a woman who has more Faith and Courage than either Cyrus or her achy-breaky father Billy Ray.

Here is what Cyrus, the Disney billion-dollar creation, said on her "Twitter" post about the poorly treated Carrie Prejean, who lost the Miss USA title for standing up for Biblical Truth on marriage. Miley wrote "Ya that's lame!" the "Hannah Montana" star wrote. "God's greatest commandment is to love. And judging is not loving. That's why Christians have such a bad rep."

The Hannah Montana role player is in good company with other "upstanding" Disney characters like Brittany Spears, who supported the pageant judge Perez Hilton and his foul-mouthed four letter word diatribe against Miss California......just for standing up for her Christian beliefs. No more from Billy Ray about his "christian" Hollywood family, thank you!

In a perverted and corrupt world, thank God for young people like those at the Kansas City or the Springfield, Il. International House of Prayer, as well as the First Runner of the just concluded Miss USA contest - Carrie Prejean, the reigning Miss California.

Visit msnbc.com for Breaking News, World News, and News about the Economy

For standing up for her beliefs, in a decidedly anti-Christian Hollywood arena, Ms Prejean has been pilloried, insulted, verbally assaulted etc by those who preach their "gospel" of "tolerance". She lost the title because of her belief in Jesus and the God of the Bible, and in fact, has gone on to testify to her walk with Christ here.

Carrie Prejean is the true winner in all of this. She is a winner with Christ as well as the millions of decent God-fearing Christian Americans who now know about her and the religious bigotry that cost her the title of Miss USA!! Amen!
Posted by The Bernie Lutchman Blog at 4/22/2009 2 comments: 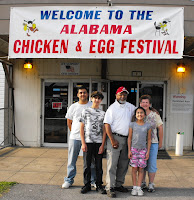 More vacation photos on Facebook.
Posted by The Bernie Lutchman Blog at 4/21/2009 No comments:

Great to touch back with her cousins, whom she had not seen for over 25 years and whom I got to know and become close buds with for the first time: Sam Howard and Edwin and Kerry Howard........both sons of her dad's brother Pastor Jimmy (Vic's dad was Pastor L. Wayne, a Southern Baptist preacher from Bama).

Highlight of the weekend - THE ALABAMA CHICKEN AND EGG FESTIVAL IN MOULTON, AL (!!!) nice bluegrass music by Dave Davis AND got to see Dale Jr's car (the No. 88 Chevy)!

Photos to follow!
Posted by The Bernie Lutchman Blog at 4/20/2009 No comments:

This is a great illustration of the Resurrection and how we should think of His Persecution and Crucifixion at the Hands of Evil men!

I used to wear crucifix necklaces with Jesus hanging on the Cross, until I came to a selfawareness that it was not right. He is NOT on the Cross anymore , He is not only Risen, but for the past almost 2000 years, He has been back on the Throne forever!

ONLY 9% OF US WITH A BIBLICAL WORLDVIEW

George Barna, the respected Christian pollster, just released his latest survey on Biblical Worldview's among Christians and it is a humdinger!

The annual and wideranging survey revealed that only 9% of American Adults....that is NINE PERCENT of a country where most people still say they are "christians", believe the Bible is inerrant and true and live according to its precepts!

Even worse, here is what Barna says about Pastors!! When you read this quote, you will see why people in the pews have no clue what God says, means and means to say! In 2009, only 51% of American Pastors - you heard right - ONLY HALF OF US PREACHERS - have a Biblical worldview! Barna says that a Biblical worldview (and I agree with him) means: "it includes a belief in absolute moral truth as defined by scripture, as well as acceptance of six core biblical beliefs: the accuracy of biblical teaching, the sinless nature of Jesus, the literal existence of Satan, the omnipotence and omniscience of God, salvation by grace alone, and the personal responsibility to evangelize 1".

Who's to blame? - Churches, Seminaries, parents and Christian media! Christian Media??!! YES!! The purpose driven movement, broke up more churches and caused people to turn away from God, due to it being a man-made plan promoted by slick marketing techniques. One year ago, Bill Hybels, (who started the seeker-sensitive movement with Rick Warren) admitted that his philosophy had failed miserably to make disciples! Good for him....but what about the over 12,000 churches in 45 countries who follow this unbiblical and led countless thousands astray. How do you put this toothpaste back into the tube?!

The greatest fault lies deep within the soul of man, who has been a rebel since the Fall in the Garden. Mortal man has been trying to play God since that time and from the Aaron's sons - Nadab and Abihu - to the false prophets in the Book of Jeremiah - to the Gnostics - to the "angels" who gave the "revelation" to Joseph Smith - to the many mistranslations (Jehovah Witness and Message bibles) - they have all attempted to devalue the True, Holy Spirit Inspired Word of God!

I have an opportunity to visit many churches over the years in various states and things are getting worse. Preachers, following the example of their TV counterparts, don't use Bibles any more, and preach self-improvement Tony Robbins-like "messages" that bear no resemblance to God's Word! No wonder pewsitters are confused!

Here is what God's Word instructs parents, even if the church has gone apostate and is cooked like the frog in the boiling water: Deuteronomy 6: 6-7 (NASB) ~~"These words, which I am commanding you today, shall be on your heart. You shall teach them diligently to your sons and shall talk of them when you sit in your house and when you walk by the way and when you lie down and when you rise up" There are many other verses to back this up throughout His Word. Psalm 119 is a tome of Love to our Savior about His Word.

For the sake of brevity, we won't look at them all, but just thank God for His Holy and Precious Word. If you wish to know how fortunate we are to be given It, read all of the book of Romans. We were given the Oracles of God. Woe to all those pagans, secularists, rulers of the Earth and the modern Church who deny its Truth.

To the 9% of us who have the True Biblical worldview of Life, let's keep our noses to the grindstone and plow ahead even harder. This way, we can each one, reach one (or more) for Christ before they have to answer to Him! In Jesus' Name, Amen