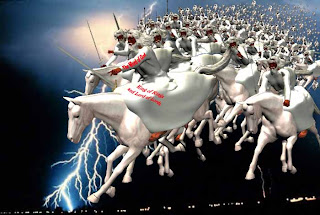 JEHOVAH-SABAOTH - THE LORD OF HEAVEN'S ARMIES!
The great hymn "A Mighty Fortress is our God" has a verse that goes like this:
Did we in our own strength confide, our striving would be losing;Were not the right Man on our side, the Man of God’s own choosing:Dost ask who that may be? Christ Jesus, it is He;Lord Sabaoth, His Name, from age to age the same,And He must win the battle.
This was written over 500 years ago by the great Reformer Martin Luther and is still sung in churches worldwide! It stands as the battle cry of the Christian who recognizes the God of the universe as the One Who will fight for us...and not just FIGHT, but WIN! Lord or Jehovah-Sabaoth means "The Lord of Hosts". Hosts is a military term which is found 240 times in the Bible! Some bible translations like the New Living, translates the phrase "Lord of Hosts as the Lord of Heaven's Armies!

Then we have the Christmas Carol - "Hark the Herald Angels"....with the line that says "with angelic hosts proclaim, Christ is born in Bethlehem"! Same thing - hosts means a multitude or organized group of heavenly beings, under the command of the Lord Jesus or...Jehovah Sabaoth!

The Name itself exudes the Fragrance of Dynamic Eternal Power, which cannot be trifled or messed with! The World will see this fearsome sight one day soon, and it will NOT be pretty! At the final return of Christ, to reclaim His Creation and sit on His Throne in Jerusalem for 1000 years, the full force of these hosts - Heaven's armies will descend on planet earth, with a vengeance!

At this point, the Wrath of God will be revealed, as predicted in the book of Revelation. The Lord of Heaven's Armies, which will have warriors like King David in it, will descend from Heaven to fight against the kings and rulers of this world. He will completely destroy them. The church and all believers will have been raptured or taken out, by then.

Before we get to that point though, we as believers should realize that He is fighting for us as well....and it's happening right now! We should realize that no matter what the Trial, Tribulation or family or personal crisis we are experiencing, He has defeated it already! All we have to do is go to Him, pray, ask and receive!

So, Father, in the Name of Jesus, I thank You, oh Mighty God, my Fortress and my Deliverer, that You, oh God are the Commander in Chief of the Universe. God, there is none like You in Power, Strength and I am in complete and total awe of You!


Lord, all of these in the Old covenant had one thing in common – they believed You completely..as they should! Dear Lord, in these days, before the Final Battle when Jesus returns to fight the forces of evil and world leaders, presidents and dictators, You still fight for those who believe in You!


Lord You fight for and free those who are in the prison of sin, self, sex and stress here in the United States, Canada and here in the western world! I thank You for that as well, dear Heavenly Father!


Oh Lord, I also thank you for Your executing judgment against me when I sin, which You do, so that I may live a life worthy of being in Your presence….and that I may live a life worthy of living under the permanent and eternal guidance and protection of the Lord of Heaven’s Armies – the Lord Jesus, Sabaoth is His Name and it is in His Name I pray, right now, for all the saints who love His Appearing, in Jesus’ Name, amen and amen!

Email ThisBlogThis!Share to TwitterShare to FacebookShare to Pinterest
Labels: a mighty fortress is our God, armaggedon, commander in chief of the universe, fight, lord of heaven's armies, lord of hosts, lord sabaoth, multitudes, power, victory, wrath of god