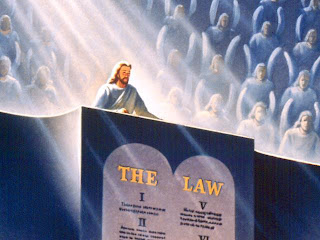 PRAY THE NAMES OF GOD


Think about this for a second - Holy Father, the Lord Jesus and the Holy Spirit are up in heaven looking down on the unformed mass called planet Earth. Jesus speaks our world into existence and then all Three say "Let Us  make man in Our Image".

Adam the perfect man is breathed into existence, given everything and a beautiful woman....except one thing - Do not eat from that Tree! Sure enough, Adam broke covenant with the Maker and all hell has since broken loose! It got so bad around the time of Noah that God Himself regretted publicly that He even made mankind (Read Genesis 6).


There was not just vile and evil acts of men - murder, mayhem, greed, pride, idolatry, devil-worship etc.. - but the fallen angels were committing a no- no! Angels, who were created before man, began having sexual relations with women, because they saw how beautiful women were. This created the Nephillim as well as a breed of giants.


This is God's Corporate Wrath, where He judges an entire people. But what mortal men and women should be concerned about is His Personal Wrath! For 2000 years, the world has ignored the plain-as-day Message of Reconciliation brought from Heaven by Holy God, in the form of the Lord Jesus. The Ancient of Days, stepped off His Throne, gave up all His Rights to be born a baby in Bethlehem and lived for 33 years as a lowly man.


He was beaten. He was humiliated. He was persecuted and then killed by religious men. Yet He said not a word except "IT IS FINISHED". For that living Sacrifice of God, Who gave the explicit way back to Him, so that Adam's sin can be paid for, through all time, has been trivialized by evil men and women until today.


The majority will continue to rebel against Him. While they see no judgment coming, they live in perpetual sin and degradation. They mock God. They blaspheme God. They spit in His Eye. They curse Him. They deny Jesus Christ and more. They have no idea they are storing up Wrath for themselves. But a day is coming, declares the Lord. Read the following two distinctive passages from the prophet Nahum and then pray with me:

The LORD is a jealous and avenging God;
the LORD is avenging and wrathful;
the LORD takes vengeance on his adversaries
and keeps wrath for his enemies.
The LORD is slow to anger and great in power,
and the LORD will by no means clear the guilty.
His way is in whirlwind and storm,
and the clouds are the dust of his feet.
(Nahum 1:2-3 ESV)

Who can stand before his indignation?
Who can endure the heat of his anger?
His wrath is poured out like fire,
and the rocks are broken into pieces by him.
The LORD is good,
a stronghold in the day of trouble;
he knows those who take refuge in him.
But with an overflowing flood
he will make a complete end of the adversaries,
and will pursue his enemies into darkness.
(Nahum 1:6-8 ESV)


Lord, day after day, night after night, many of all ages, including those who call themselves Christians die in their sins because, for their own stupid personal reasons, they refuse to come to You, to seek forgiveness and make their peace with You. Countless billions will spend eternity in Hell and the Lake of Fire, away from You, because they believed the Lie from the Pit.

While they believe all those Lies, Father, they stored up Wrath for themselves, which they will realize on the moment of their death, means eternal separation from You. Still, while they stored all of that up, You gave them the way of escape through Belief and Forgiveness through the Son, Jesus...and they continue to ignore it. You could wipe all that away, if they would just come to the Cross!!!!

Father, in these last days, I pray many will open their eyes and hearts, before it is too late for them...and I pray many will see the signs of the Times and confess with their mouths and believe in their hearts that Jesus Christ is Lord....and BE SAVED through His Blood and His Name, amen and amen! Oh God, let it be so, in Jesus' Holy and Precious Name, amen!

TOMORROW: GOD IS FULL OF GRACE