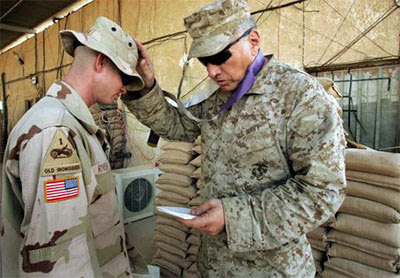 US MILITARY CHAPLAINS CAN NOW PERFORM SAME-SEX RITUALS
WORD OF THE DAY: "OBEDIENCE"


Obedience fit right into this downward cultural shift, which occurred yesterday, when the Civilian leadership of the Pentagon said U.S. Military chaplains can now perform private 'same-sex' rituals, on or off base! In a fit of moral, legal and spiritual contradiction, the current political leadership of the Department of Defense (DOD) then proceeded to offer taxpayer-funded government buildings for these ceremonies.


The legality is unquestioned as the 1996 Defense of Marriage Act (DOMA) is still the law of the land. This is wrong. More importantly, this is a slap in the Face of Holy God by politicians who serve man more than God. Romans 1 comes into play as more and more, we see American leaders turning from God, forcing Him to remove His protection from this once-blessed country.


This is another layer of stress put on American Christian Chaplains, who were told a few years ago that they could not pray in the Name of Jesus! Therefore the question arises: to whom does a Chaplain owe his loyalty and obedience? Sure the DOD said Chaplains can "exercise" the conscience clause and "refuse to participate". How many expect this opt-out to last? Nobody!


Our Evangelical chaplains took an oath to defend and protect the Constitution of the United States when they signed up and especially if they are soldiers as well. There is nothing in that US Constitution restricting them from the free exercise of speech or religion. But their position is different from the enlisted man or the officer. He is a spiritual authority and while he is under the same orders and the Uniform Code of Military Justice, a Chaplain's REAL Commander in Chief is God, not the US President and his DOD flunkies.


Any order from high up in man's economy, which violates both God's and man's law can be rejected. Therefore, should a chaplain refuse to perform what's coming next under man's regime....and that is, same-sex marriage? Yes! A thousand times, yes!


A man of God, a licensed minister and chaplain is 100% accountable first to Almighty God, Who will not buy the answer that "the devil made me do it"! US Chaplains are meant to stay in there and defend the Faith as much as they minister to those who fight to defend the United States of America.


Our Hebrews 11 verses today - Saturday - as we go into Week 5 of this amazing Chapter and teaching are Verses 17-19. In context here they are:
By faith Abraham, when he was tested, offered up Isaac, and he who had received the promises offered up his only begotten son, of whom it was said, “In Isaac your seed shall be called,” concluding that God was able to raise him up, even from the dead, from which he also received him in a figurative sense.


Like these US Chaplains, our hero Abraham was tested...and even more so! Remember two things - God made Abraham a promise to cause many nations to literally be birth from an old man. Secondly, God asked Abraham to then sacrifice his own beloved son, Isaac!


After the miracle of the birth of Isaac when he was 100, Abraham did not doubt one second God will keep His Promises. The Bible says numerous times that "Abraham believed God and He counted it to him (Abe) as righteousness"! So while Abraham had to be scratching his head when God told him that Isaac was the sacrifice - ABRAHAM OBEYED!

Every saint mentioned in the Heroes Hall of Faith here in Hebrews 11, OBEYED GOD (rather than men) and stood on Faith - absolute, complete and obedient Faith to Almighty God. The result - a people whom Christ will call unto Him as His own one day soon! Should we expect our chaplains to be like-minded? Yes! But they will only be so if we individuals and ordinary folks, support them with prayer, encouragement, cards and more! Surely, we can do this!


In the Name of Jesus, amen.