THINK ON THESE THINGS - THURSDAY

CHRISTIANS AND HALLOWEEN
Next Monday October 31 is the national holiday of Hell! How dare I say that of that 'innocent fun day of Halloween'? Because I could! "But, Bernie, what's wrong with kids dressing up in costumes, going door to door for cheap candy etc etc...?"


Well, there is nothing wrong with candy or costumes as separate items. There is plenty wrong with being duped into thinking there is something innocent  about this day though! Therefore, from now unto October 31, most of the THINK ON THESE THINGS devotionals/posts will be dedicated to exposing the 'spirit' of Halloween.


Today's message caused me some grief last year when I first posted it, but I think it is relevant in showing how our culture was slowly brainwashed into making Halloween one of the biggest celebrations in America, after Christmas and Thanksgiving!


“Dear friends, I warn you as “temporary residents and foreigners” to keep away from worldly desires that wage war against your very souls…” 1 Peter 2:11 (NLT)

Each year around this time, we go through this exercise – what  does a sold-out Believer in Christ to make of Halloween.  Each year men, fathers and radical Christians like me sound like fuddy duddys to the rest of the world….and that includes a number of Christians (professing and real)!

However, I can take the blowback, as am used to being hammered and ostrasized for taking a bold stance for Christ. So basically, I have never allowed my own kids to trick or treat, celebrate Halloween or watch the horror show garbage on TV, each and every October, period.

I don’t see how one can allow their kids to dress up like the devil or something sleazy, and then try to teach them to watch out for Satan who comes to steal, kill and destroy!! This is selective insanity. Halloween is an oxymoron – like “Christian Yoga”….which I will address next issue.

Sin and darkness have been around since Genesis 3 and the Fall of Man caused by Satan. But some of the modern incarnation of the popularity of Witchcraft, Wicca and the like began with Ouija boards and the TV Show BEWITCHED!! Yes, BEWITCHED!!

For the 8 years it ran (1964-72), BEWITCHED brought a “sweet” All American family face to the an ancient evil by deception! Starring Elizabeth Montgomery as Samantha the witch, who married a mortal named Darren Stephens, “Samantha” was portrayed as a normal suburban wife. Darren married her knowing she was a witch with the admonition/command to “not  practice any witchcraft in this house”!! Of course, a witch is going to obey you! The entire series was full of wizards, warlocks, spells, incantations and the like.

Sam’s mother – Endora – is taken directly from the Witch at Endor whom King Saul stupidly visited to have a séance with the late prophet Samuel (see 1 Samuel 28:3-25)…and on and on. All the other worldly beings in this TV series were ageless beings who lived in the air!

DOES THIS SOUND FAMILIAR??!! “For we wrestle not against flesh and blood enemies,  but against evil rulers and authorities of the unseen world, against mighty powers in this dark world and against EVIL SPIRITS in the heavenly places” (Ephesians 6:12, NLT). It is my contention that this TV series “boiled the frog” slowly by showing witchcraft as this harmless little lifestyle that was “oh, so cute…just look at Samantha and Tabitha (her daughter – another witch)”! 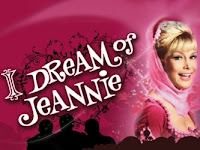 Combine this with “I Dream of Jeannie”, only three TV networks for decades, and you have a cultural absorption into worldwide consciousness from the pit of hell! Think am overreacting?  I don’t believe so.

The Spirit of God and the Word of God are EXPLICIT in their commands about this evil. Until we were saved and redeemed and knew better, we too thought these shows were funny….even though something did not quite feel right! What BEWITCHED and Jeannie opened up was an explosion in the ancient cult of Wicca…and not to mention a number of new brand of female TV shows with “nice” witches .

Concerning Wicca – that involves prayer circles and seeking “help” from spirits of another world as well! Most practicioners are women. Most mature believers think that Wicca and other satanic rituals involving pagan “goddesses” appeal to women, because it gives a certain amount of Power to those seeking that kind of thing! Never mind this kind of empowerment leads straight to eternal damnation in the Lake of Fire!

Concerning other TV shows with attractive female witches, here is a short list: SABRINA, BUFFY THE VAMPIRE SLAYER, CHARMED AND TABITHA (offshoot of BEWITCHED).  The new book and movie phenomenon called TWILIGHT is also a demonic-induced attack on the mostly young female population of America. That story was given to its creator by what she called an “angel of light”!!

Read here in the Bible to find out who the “angel of light” really is!! What does this have to do with Halloween? Everything! Halloween is a celebration of all these spirits – clean and unclean, which are not from the Real God.

I am sure many well-meaning and Christians will disagree with me, and say celebrating Halloween or watching Sabrina or TWILIGHT is JUST entertainment..(more on TWILIGHT tomorrow).

Concerning our children – there are many other ways to have alternative activities for them at this time of year. This will take a proactive stand to live DAILY in the Word, and according to His Word (see Psalm 119).

This can involve all like-minded members of the Body of Christ, in the Local Church.