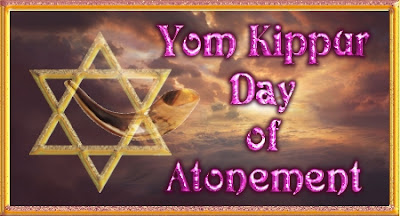 YOM KIPPUR ...THE DAY OF ATONEMENT!
and the Scarlet Thread of Forgiveness

On Yom Kippur (or the Day of Atonement) the Talmud says that for hundreds of years, there hung a scarlet thread outside the Holy of Holies in the Temple. Back then, the Bible prescribed a scapegoat to cover the sins of the man. 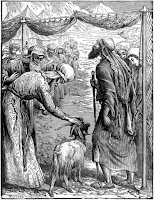 The High Priest would put his hand on the chosen goat, and transfer the sins of Israel unto the goat. If this scapegoat was acceptable to the LORD, the Scarlet Thread in the Temple would turn WHITE!  Sometimes the thread would stay scarlet, depending on the spiritual state of the nation at the time! Isaiah 1:18 says to God's people "come let us reason together...though your sins be scarlet, they shall be as white as snow"!

This Scarlet Thread procedure, if you will, remained in force in the Temple year after year. However according to a tractate in the Talmud, for FORTY (40) years before the Romans completely destroyed the Temples (just as Jesus predicted); the thread remained scarlet and never GOT WHITE again. 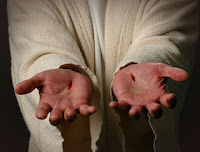 The Temple in Jerusalem was destroyed in AD 70. For 40 years from 30 AD to 70 AD and the Temple's destruction, God did not accept the bulls and goats sacrifice from the temple's priests anymore. Why? Because the Perfect Lamb of God - the Son of God - the LORD Jesus, had already paid the Once-and-for-all Sacrifice with His Life on the Cross on 14 Nisen, 30 AD!  (For instance Good Friday 2012 fell on the same day as Passover, when He was executed 1972 years ago!).

Still, the Feast Day of Yom Kippur is important and is the Holiest Day on the Jewish calendar/religion. None of us can make atonement, or pay for our own sins. This was done by the Holy Son of God. Therefore, Christians should identify with our Jewish brothers here because of the Holiness of God.

Next, we should approach this day in Humility and thankfulness for that same sacrifice on the Cross.

In terms of the Messianic Millennial Kingdom to come,  this is how Christians and Messianic Jews should approach Yom Kippur. This Day of Atonement already happened, but by its placement between Rosh Hashanah (the Jewish New Year 5774 since Creation) and Sukkot next week, the Lord is preparing us for His Coming when He will "tabernacle" with us. He wants us to remember His atoning death on the Cross.

There will be more on Tabernacles or Sukkot next week. Sukkot is the last of the Fall festivals which will not only return and be reinstituted when Christ reigns from Jerusalem but it will carry a huge significance. It is representative of the Creator living with His Creation! If anyone has any better news out there, let us know and then prove it!

This Feast of Tabernacles will be a requirement for all the nations to celebrate in Jerusalem with the Eternal King. Everyone will be expected to and should be grateful for the Substitutionary Atonement on the Cross, for which we are cognizant on this Holy Day - Yom Kippur.