THINK IN THESE THINGS - FRIDAY 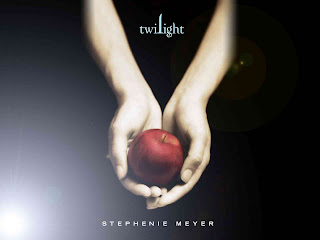 AMERICAN CULTURE IN ITS TWILIGHT
NEXT UP IN OUR DISCERNMENT SERIES ON HALLOWEEN: 'THE TWILIGHT PHENOM"
It is absolutely shocking that some christian outfits, ministries and even church groups recommend the latest teenage sensation cult book/TV Series "TWILIGHT" as something teenage girls and boys should watch!

Have they no sense of biblical decency and discernment? First, here is what the Bible says we should do: "And have no fellowship with the unfruitful works of darkness, but rather reprove them. For it is a shame even to speak of those things which are done of them in secret (Ephesians 5:11-12)

No fellowship, means NO FELLOWSHIP! It means, you don't mess with that stuff, hoss! Not just that, but we kick it to the curb! Do we even know who wrote this piece of demonic heresy?

Twilight was first a fast selling book about a 17 year old young woman named Isabella "Bella" Swan, who falls in love with a vampire named Edward Cullen. Now imagine the following book being not just a New York Times Bestseller book, but on the CHILDREN'S BEST SELLER LIST as well!

Now here is how Publishing magazine critics summarized the entire gist of Twilight: (it is a) "dark romance that seeps into the soul" and reflects "perfectly the teenage feeling of sexual tension and alienation".

YES! This is your wholesome family entertainment which people say a sweet, innocent 13 year old daughter should read! Some mom was on the official Disney blog, doing just that! These people are sick! The comments from the other young moms were just as bad!

But, just what is the thinking behind this Twilight? Well, it was written by a  young lady named Stephanie Meyer who said she had a vision on June 2, 2003. This vision made sit down and start writing what became "Twilight". In the vision, she saw, according to her website " One of these people was just your average girl. The other person was fantastically beautiful, sparkly, and a vampire". Did you catch that? The beautiful sparkly thing was a Vampire!

Who else disguises himself as an 'angel of light'?  SATAN!

She then said she had an additional dream after Twilight was finished, when the main Vampire  Edward literally came and visited her to talk about it and he was angry with her. The 'vampire' or angel of light told Stephanie that 'he was real". Stephanie Meyers also said she felt as if this was too terrifyingly real and who she thought was Edward, was going to kill her!

This is demonic activity from the pit, my friends. Again on her website, Meyers said "The apple on the cover of Twilight represents “forbidden fruit.” I used the scripture from Genesis (located just after the table of contents) because I loved the phrase “the fruit of the knowledge of good and evil.”

I will go no further in explaining this garbage except to say, this Twilight author condemns herself by her very words.  She meets and fellowships with the prince of darkness, takes instruction from him and then goes to Genesis chapter 3 to glorify the Fall of man and sin.

Her books have led to movies and a TV series, which has corrupted this current lost generation, many of whom are church going teens. Notice, I did not say born-again christian teens. Some youth pastors are taking their groups to see this garbage and have youth reading these books.

Woe unto them for allowing this with no discernment, not just what the Scriptures says about this kind of behavior (teenage immorality and witchcraft) but HOW to apply it to real life. There also seems to be no discernment when it comes to not just what HOLY GOD demands, but just the basic decency of humanity.

Lord have mercy! My prayer is all these people, especially so-called christians, who are just really carnal professing cafeteria christians, will one day come to a knowledge of the Truth. May there be repentance and restoration with God, because one day soon, there will be an accounting for this stewardship  here on earth!

How we live now, will determine how the coming Judgment Day will go! Are you ready?!