THINK ON THESE THINGS - HALLOWEEN EDITION

The following article was written 10 years ago by elder Richard T. Ritenbaugh, son of pastor John Ritenbaugh who once pastored here in Illinois and Michigan. He wrote about an incident 10 years ago, when the Mayor of Fort Worth, Texas cancelled official "TRICK OR TREAT" so-called "celebrations" across the city!
Here is his essay on this day, Halloween: 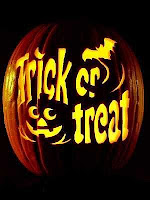 Howls of protest arose this past week because the mayor of Fort Worth, Texas, advised residents not to allow their children to trick-or-treat from door to door this year, due to the recent terror attacks on the U.S.

Though this happened in just a few places, it became a modest national uproar, even appearing as a major topic on national talk shows. A majority of Americans just love Halloween—many enjoy it more than Christmas, July Fourth, and Super Bowl Sunday! In terms of its impact on the economy, it already ranks second to Christmas, and it is comparable to Super Bowl Sunday and St. Patrick's Day in beer sales. Only Christmastime sees more sales of holiday decorations, and of course, candy sales are off the charts before Halloween!

What is the attraction? Are people really into ghouls, spirits, devilry, and monsters? Are Americans really that attracted to the otherworldly theme of the holiday? No, probably not. Polls to the contrary, most Americans do not believe in demonic or even angelic spirits enough to think of Halloween as some kind of celebration of them.

The answer lies in the donning of costumes and the consumption of alcohol: Halloween is the year's biggest escape from reality!

The ancient Celtic celebration of Samhain (November 1), from which All Saints' Day and All Hallows Eve derive, was a kind of New Years holiday. Along with the days immediately before and after, it was special because the Celts believed that the boundary between this world and the spirit world relaxed or lifted, allowing spirits to cross between them more easily. As this idea terrified superstitious people, they mollified the spirits by leaving out food and treats so that they would not curse them.

Some practiced various forms of divination to contact departed loved ones. Druids thought this to be the best time to seek guidance from the dead, and the bards sought otherworldly inspiration for their poetry and song.

Another interesting aspect of Samhain's celebration is that the Celts considered it to take place in "no-time," that is, neither in the old year nor the new. Since this "no-time" was a time to itself, normal laws, order, strictures, and customs were held in abeyance for these three days of merriment. People thus did whatever they pleased.

So, the fool held court as the wise man. The baseborn acted as the noble. The servant became the master. Women dressed as men, and vice versa. Farmers turned out their cattle, pigs, and sheep from their pens and pastures, allowing them to roam free. Some entered houses through windows rather than doors. No work was done because it was a time of total abandon: of revelry, feasting, drinking, taking dares, disguising oneself, and pretending to be something one was not. Those three strange days were "chaos time."

Our modern version, Halloween, is a "tame" descendant of this Celtic celebration, and its popularity is rising steadily. Revelers use the holiday as an excuse to escape their mundane, banal, yet stressful lives and "take a walk on the wild side." Laws, customs, mores and order cease for a short time, as participants indulge themselves in whatever they desire.

Probably most consider it "blowing off steam" or "having a good time," but self-indulgence is sin. Instead of releasing the pressure by coming out of a world conducting its affairs apart from God (Revelation 18:4), celebrants compound their troubles by adding on sin and its destructive consequences.

We have been called to a different life, one in which we "put off" our former corrupt, lustful conduct and "put on" new habits and behaviors that reflect the righteous and holy life of Jesus Christ (Ephesians 4:22-24). Paul concludes in Ephesians 5:8-12, 15-16:

For you were once darkness, but now you are light in the Lord. Walk as children of light (for the fruit of the spirit is in all goodness, righteousness, and truth), proving what is acceptable to the Lord. And have no fellowship with the unfruitful works of darkness, but rather expose them. For it is shameful even to speak of those things which are done by them in secret. . . . See then that you walk circumspectly, not as fools but as wise, redeeming the time, because they are evil.

(Image by Google
(Credit: Church of the Great God, Fort Mill, South Carolina)
Posted by The Bernie Lutchman Blog at 10/31/2011