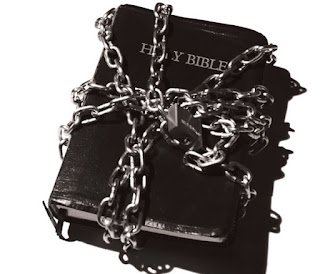 Jesus said in John 16:33 "I have said these things to you, that in me you may have peace. In the world you will have tribulation. But take heart; I have overcome the world.”

The word Tribulation comes from the Latin word "tribulare" which means to face distress,  suffering and/or persecution. Jesus knew all about persecution and hate, affliction and evil from the evil religious men of Jerusalem, 2000 years ago. Since they executed Him on the Cross and everyone of His Disciples, except John, all true disciples of the Lord Jesus Christ have faced some form of persecution over the almost 2000 years since Calvary.

What happened to William Tyndale is not unique. The governing authorities wanted to keep the hoi-polloi in the dark about just how liberating and full of Grace the True Gospel of Christ was and is. To maintain their wrongfully acquired stranglehold over the souls of millions, they had to force their will and withhold the Scriptures from the people by adding rule on rule, rule on rule, a little here, a lot over there, a tradition here, a ritual over there....until church became what Christ IS NOT! Church became a burden and a force as oppressing as the state. William Tyndale was executed and burnt at the stake in 1536 and the only crime he committed was to translate the Bible from its original Hebrew and Greek, so that anyone could read it!

Fast forward to 2012. Tyndale House are the great worldwide publishers of the Bible from Carol Stream, Illinois. They publish the popular New Living Translation of the Bible, which is quoted as much as Crossway's English Standard Version in this blog, almost daily. Tyndale also publishes numerous well known Christian books and authors like Randy Alcorn and Coach Tony Dungy.

This past year, the publishers of the Bible - Tyndale - the Word of God - has been ordered by the state, the United States Department of Health and Human Services (HHS) to start paying for the contraceptives of its employees as part of their health insurance package. What is even more ungodly in this mandate, is the order to cover pre-abortion pills in this contraception package! This is not some third world country doing this - this is the United States of America, which was founded on Religious Liberty! Caesar is now telling Christian employers to obey Caesar rather than God, according to the brief being filed in court by the American Center for Law and Justice (ACLJ).

The ACLJ said “Thus, the Mandate presents all Christian employers with a stark choice: obey Caesar, or obey Christ.”....The HHS Mandate, by requiring people of faith to provide abortion-pill coverage, “imposes a substantial burden on [their] free exercise of religion by coercing [them] to choose between conducting their business in accordance with their religious beliefs or paying substantial penalties to the government." They also said "Both the Constitution and federal law, through the Religious Freedom Restoration Act (RFRA), prohibit the government from infringing upon that most sacred right of religious liberty that we have all been endowed with by our Creator".

More will be written and discussed about this as more and more Christian leaders speak up against this unconstitutional mandate, from a government which claims to be run by Christians. Tomorrow we will examine what a real Christian is and how we should pray for leaders of any country, including those who violate God's Word, His Statutes and commands.

Father in the Strong and Mighty Name of Jesus, we thank You that YOU and YOU alone oh God, are the Judge of all the earth. You run the only Supreme Court in Heaven, which will have the final say on all the affairs of man, from creation to the end of time. I thank You that You gave us Grace and Mercy and Compassion, which never falls because Great is Thy Faithfulness to us, from everlasting to everlasting. Thou and Thou alone are worthy of all praise, not Caesar or any system of man devised as corruptly as the institutions of man - from the church that killed all the prophets and saints to those who persecute Your saints in countries around the world, in these last days. We pray for those who are telling publishers of Your Word, that they must pay for pills that could potentially end the precious life You create or else, in direct violation of Religious Conscience and the Word of God. We pray for their salvation and for a change of heart, at higher levels,  knowing that You judge righteously and mercifully, according to our deeds and our standing in Christ. Thank You, and bless Your Holy Name, oh Commander of God's Courtroom, in Jesus' Name, amen.

Great Word bro. Thanks for remembering this anti-christian travesty in prayer. God is and will be victorious when He sees His people stand for His truth in the way He has called to do. Too many soft and weak Christians today that are not willing to trust God. They fear man. But Acts 5:29 puts the fear of God and man in a different light. May God be feared and His truth uplifted. www.truthinspires.com
Pastor and Brother Mike
FBC Springfield Il

Praise God for your accurate insight my brother! The reason why this kind of thing is proceeding almost unchallenged is because, as usual, the church is asleep and its leaders are into navel-gazing and managing religious bidnesses rather than Stand Up Stand Up for Jesus! God will get His Justice! These people don't believe it because they follow cheap Grace, so they fear man more than God.
Sad...so sad, brother!
Thank you!
Folks - CHECK OUT PASTOR MIKE'S AWESOME WEBSITE HERE:
www.truthinspires.com