TYNDALE PERSECUTED AGAIN - 500 YEARS LATER!
PART 1
“Blessed are those who are persecuted for righteousness’ sake, for theirs is the kingdom of heaven (Matthew 5:10 ESV)
If you have ever seen, read or known of a New Testament in English, you have seen the work of the great William Tyndale! Tyndale grew up in the dark ages of 15th Century England where the poor masses knew nothing of the richness of the Word of God, except what the Roman church wanted them to hear at Sunday mass. It was a time when the institutional Roman church and its hierarchy were supreme to the Christ Himself Whom they said they honored. 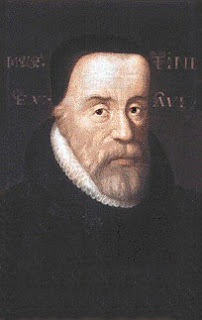 It was against this backdrop that Tyndale knew the Lord had called him to translate the Word from Hebrew and Greek into the common man's language. Like Luther, Tyndale had been convicted by the Book of Romans unto Salvation and argued incessantly, until the church authorities....just like the pharisees before them....decided he must be stopped!  Translating the Bible into English was against the Law and the Church edicts. But time and progress were beginning to leave those people behind. The great Reformer Martin Luther was already making use of the Printing Press and Tyndale found willing friends on the European continent to which he escaped and kept on the run, while printing copies of the Bible in English!

In this shortened description of the Work of Tyndale, we see some of the great names of western civilization - Cardinal Woolsey; Thomas More and Henry VIII - all conspiring to shut down the spread of the Gospel to God's people, in order to protect their corrupt institutional interests. Yet, even though they persecuted, then burnt Tyndale at the stake for the cooked up crime of heresy at the young age of 42, these people could not stop the work begun by Tyndale. God wanted His Word taken to the people and used Tyndale's associates to accomplish it. 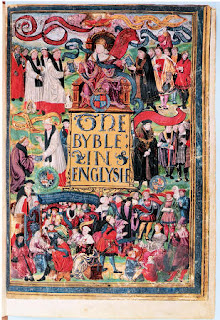 Tyndale's last words, before the executioner strangled him for saying them were "Lord, open the eyes of the King of England"! So said, so done. King Henry the Eight had the first complete bible in English - the GREAT BIBLE - translated, using most of Tyndale's scholarship, so that it could be read in English across England! This Tyndale influenced and based Bible, was the fuel of the Reformation and the Geneva Bible. Then later on, the evil King James of England realized he could not stop these translations anymore. He too eventually authorized what we call the Authorized King James Version (KJV) of the Bible in 1604. When it was completely translated into the English language of the time, it became known as the 1611 Authorized KJV.

It was the vision, obedience, boldness and determination to follow the true interpretation of the Scriptures, by William Tyndale, which led to what we read today in our English translations! This burning desire to see souls saved and God's Word shared by the farmer at the plow; the blacksmith or the banker is what should consume us. This pure desire, from a man who literally took up a fiery Cross and followed Christ, eventually cost him his life. Tyndale was persecuted for the Cause of Christ.

Today in America, the Name of Tyndale, the Great Bible publishers of America, is again under persecution.

Father, Heavenly Father, we thank You for men like Wycliffe, Tyndale and others who risked life, limb, freedom and family to accomplish the Acts 1:8 mission You sent them on, by refusing to back down from the proclamation of the Word of God. We thank You for giving these men, especially Tyndale, the boldness and courage to translate the pure, literal Word of God, all 66 Books, into English, which now is part of the Bible which we read today. Thank You for the Word Who became Flesh. Thank You for He, Who was in the Beginning as the Word and for His Sacrifice for us, that we may become Your sons and daughters in Eternity, in His Name, the Name of Jesus, I pray, amen.

Hey Bernie! I have been reading on my phone but I cannot comment from there for some reason. I tried to g+ it but it wouldn't load! Just wanted to let you know that Bro! I have to come online on my desktop to comment, so I will take that time everyday! Praying with you!

I am so happy that one of my favorite peeps in the whole universe is praying with me on this, sis! This fortifies and encourages me as it did when you did your 40 days of prayer!!! WOOHOO!! We saw how wonderful that turned out to be such a blessing to so many! May this be the same and thank you for joining in one accord with the Spirit and I in prayer!! I bless you in the Name of Jesus, CBT! WOOHOO! AMEN!