Check this out - imagine you have some nice sweet dark and cool liquid out in the atmosphere somewhere. Then 15 yards away, there is a ball of carbonated gases. Then 25 feet away, some red and white paint in separate gobs, just sitting there floating around in a pond of its own, well, red and white paint gobdom. Then 10 inches from that are sheets of soft flat aluminum. Then one day, 65 billions years ago, according to modern legend, a big explosion happened and a can of Classic Coca Cola was born!!!

This is what over-educated (by this world's standards) people like the following atheists- Bill Nye the Science Guy; Richard Dawkins and Stephen Hawking...and every liberal in America and the western world want normal people to believe, in essence - that this perfect Creation and every cell of every human body, happened out of a "Big Bang"....which violates EVERY LAW OF SCIENCE!!!! For the Law of Science to be valid it is to be OBSERVABLE and repeatable!! Did Carl Sagan and Bill Nye or Ted Koppel see the Big Bang??!!! This is compounded nonsense, is what it is!


Here is what Bill Nye said in a controversy he started a few weeks in September, which still rages on across the Christian family world! Nye ranted in his video "I say to the grownups, if you want to deny evolution, and live in your.... world that's completely inconsistent with everything we observe in the universe, that's fine. But don't make your kids do it - because we need them. We need scientifically literate voters and taxpayers for the future", thus sayeth this, yet another one of the self-appointed prophets of secular humanism!


The religious bigotry, from those people is staggering! But even worse than their secular bullying of Christians, is the danger inherent in their mission. These people’s mission – from Dawkins to Hawking and Nye – is not just to denigrate Christians and the Bible, but using their positions of authority in the secular/humanist education establishment to brainwash western children.

They have succeeded to a certain extent both Eastern and Western Europe as well as Canada and at least half of the US. The level of Godlessness in these countries is stunning...and it is so, increasingly here in the US! This is what all is all about - Rebellion against God!

Also, the arrogance of these people knows no bounds. They control the mass media, Hollywood and almost all of the Education system from kindergarten to Post - graduate colleges, so just like the commissars of the old Soviet Union, these people must be taken seriously.  When Nye was criticized for what he said above, he doubled down last weekend (September 24) to the AP. He said to the Associated Press “If we raise a generation of students who don’t believe in the process of science, who think everything that we’ve come to know about nature and the universe can be dismissed by a few sentences translated into English from some ancient text (the BIBLE), you’re not going to continue to innovate,” in a telephone interview with AP. 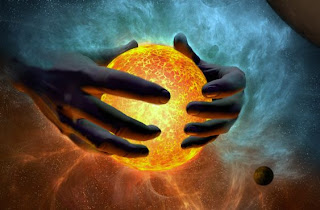 This is not just a secular evolution perspective but complete disrespect for parents of all stripes of the Majority of Americans (46% after 30 plus years of Evolution indoctrination, who still believe God created this great earth in 1 day, 6000-10000 years ago)! Therefore, whenever our Biblical Worldview is attacked directly and so personally as it was here, we must stand and respond. While Nye and his kind warn that US science is in danger because of people like us who believe in God and Jesus Christ and Creation, he has no clue who the actual CREATOR of TRUE SCIENCE really is!

Therefore, in response to Bill Nye and others like him, I quote the Word of God, which he does not believe in...yet which speaks for itself in Truth, Power and Glory. Here is God Himself, from Job Chapter 38:


Then the LORD answered Job out of the whirlwind and said:
“Who is this that darkens counsel by words without knowledge?
Dress for action like a man;
I will question you, and you make it known to me.
“Where were you when I laid the foundation of the earth?
Tell me, if you have understanding.

Who determined its measurements—surely you know!
Or who stretched the line upon it?
On what were its bases sunk,
or who laid its cornerstone,
when the morning stars sang together
and all the sons of God shouted for joy?

“Or who shut in the sea with doors
when it burst out from the womb,
when I made clouds its garment
and thick darkness its swaddling band,
and prescribed limits for it
and set bars and doors,
and said, ‘Thus far shall you come, and no farther,
and here shall your proud waves be stayed’?

“Have you commanded the morning since your days began,
and caused the dawn to know its place,
that it might take hold of the skirts of the earth,
and the wicked be shaken out of it?
It is changed like clay under the seal,
and its features stand out like a garment.
From the wicked their light is withheld,
and their uplifted arm is broken.

“Have you entered into the springs of the sea,
or walked in the recesses of the deep?
Have the gates of death been revealed to you,
or have you seen the gates of deep darkness?
Have you comprehended the expanse of the earth?
Declare, if you know all this.

“Where is the way to the dwelling of light,
and where is the place of darkness,
that you may take it to its territory
and that you may discern the paths to its home?
You know, for you were born then,
and the number of your days is great!

“Who has cleft a channel for the torrents of rain
and a way for the thunderbolt,
to bring rain on a land where no man is,
on the desert in which there is no man,
to satisfy the waste and desolate land,
and to make the ground sprout with grass?

“Has the rain a father,
or who has begotten the drops of dew?
From whose womb did the ice come forth,
and who has given birth to the frost of heaven?
The waters become hard like stone,
and the face of the deep is frozen.

“Can you bind the chains of the Pleiades
or loose the cords of Orion?
Can you lead forth the Mazzaroth in their season,
or can you guide the Bear with its children?
Do you know the ordinances of the heavens?
Can you establish their rule on the earth?

“Can you lift up your voice to the clouds,
that a flood of waters may cover you?
Can you send forth lightnings, that they may go
and say to you, ‘Here we are’?

CLICK HERE TO READ MORE OF CHAPTERS 38-41 ON CREATION