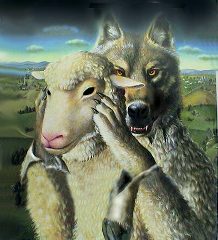 CP - THE PATH AWAY FROM CHRIST
(Book Recommendation included)
Imagine my horror when I learned that a friend of mine told me recently that she was going to a retreat so she can focus on her "Centering Prayer". Why? I have seen that kind of slippery slope before, when someone, whose Christian walk I once cared about, went from practicing this CP and other mystical mediation....to becoming a FULL FLEDGED BUDDHIST!!!


Centering Prayer is part of the Contemplative Prayer movement which leads one into a silent position "before God" so we can empty ourselves, in order to "hear from that same God". The official definition from their Centering Prayer website calls it " a method of silent prayer that prepares us to receive the gift of contemplative prayer, prayer in which we experience God's presence within us, closer than breathing, closer than thinking, closer than consciousness itself. This method of prayer is both a relationship with God and a discipline to foster that relationship".


The problem is, this is NOT what we are supposed to be doing! In actuality, what this does is lead many away from the TRUE Meditation and systematic study of the Word of God, to an altered state of consciousness and need for more and more intense EMOTIONAL fulfillment. The person involved in CP is then no longer fully engaged in the Word of God and seeking revelation and illumination THROUGH His Word, but is now seeking to find his/her true identity via the "inner self" and calling it God! They are now seeking after an 'experience' rather than an Encounter with the Living God, through His Word and His Holy Spirit!


Nowhere in the thoughts and discussions of those who are fully engaged in this heresy, is the Gospel proclaimed and prayed into. What happened to this one person, who ended up walking away from Christ and the Church and started chanting pagan Hindu mantras and adopting Buddhist/Zen ways....was that she was told was okay, by their "gospel writer" and CP "guru" Thomas Merton - ""Contemplative consciousness," say Merton, is "a trans-cultural, trans-religious, trans-formed consciousness … it can shine through this or that system, religious or irreligious"(Thoughts on the East, p.34).


If this CP nonsense is "trans-religious" according to the CP's top man Merton, this movement has ALREADY REJECTED JESUS - and He will reject them on the Day of the Lord, in front of God's Courtroom! When He said in John 14:6 "I am the WAY, the TRUTH and the LIFE", Jesus meant the ONLY way! He said the Way is Narrow and only a FEW find it. This CP thing, through which you can now find inner peace and meditate through, not just the so-called "God of Christianity", but the 300 pagan and/or animal gods of Hinduism and the philosophy of Buddhism will lead many straight into hell!

How can I, a man of God and supposedly of "Love" say such a thing? Well, I know a Chinese brother who was once a Buddhist, who told me over and over what they believe and what it means. For some of these professing Christians to now join the ungodly Centering/Contemplative or Breath Prayer movement to get closer to their concept of "God", they have to deny the reality of what these 'religious systems' (which Merton promotes above) teach and what they really are - a gateway to eternal separation from God!

Here are some of the Contemplative Prayer authors to stay as far away from as possible: Thomas Keating; Brennan Manning or anything by Teresa of Avila and anything by Richard Foster! Beware of these people and their books! BE DISCERNING! GOD DEMANDS IT OF US!


For Many Shall Come in My Name by Ray Yungen

Description: An Ancient Wisdom is drawing millions of people into mystical experiences and preparing the world for the end of the age ... find out how. Most people believe the New Age has been long gone from our society, and if practiced at all now it is only by unconventional fringe types. For Many Shall Come in My Name reveals this is not the case. In fact, quite the opposite has occured. The New Age movement (a term not normally used by its proponents) has permeated virtually all aspects of our society. This “Ancient Wisdom” spirituality can be quite readily encountered in the following fields: Business, Education, Health, Self- Help, Religion, and Arts & Entertainment. This book examines them all.

Author Bio:
Ray Yungen, author, speaker and research analyst has studied religious movements for the last twenty years. He is also the author of A Time of Departing. He is available for radio and television interviews and for seminars, conferences and college assemblies. His exuberance for life and his love for Jesus Christ and for people are evident in his writing. Mr. Yungen resides in Salem, Oregon.

Table of Contents
1. The Age of Aquarius and its meaning in today's world
2. New Age practices like Reiki and yoga
3. Harry Potter and real witchcraft
4. The law of attraction and Oprah
5. Present day New Age prophets
6. Yoga in the public schools
7. Tantric sexuality and its spiritual risks
8. The Kabbalah (Jewish mysticism)
9. Wicca and its growing appeal
10. The occultic explanation of the Holocaust
11. Interspirituality and the coming false Messiah
12. The New Age as a force in politics
13. New Age hostility toward the church
14. The New Age in light of biblical prophecy

For the word of God is living and active and sharper than any two-edged sword, and piercing as far as the division of soul and spirit, of both joints and marrow, and able to judge the thoughts and intentions of the heart....Hebrews 4:12 (NASB)