A NICKEL AIN'T WORTH A DIME ANYMORE 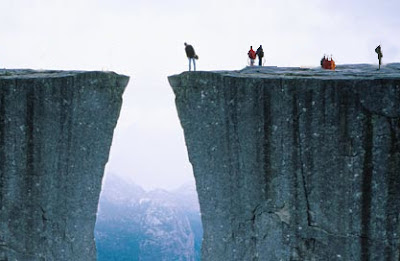 WHO WILL STAND IN THE GAP?
The great and eloquent (!!) "wordsmith" Yogi Berra once said "a nickel ain't worth a dime anymore" when he was at the 1955 opening of a new ice cream shop in the Bronx. The famed New York Yankee catcher from the "Hill" in St. Louis was lamenting, jokingly, the cost of a cone going up to 10 cents!

What else "ain't worth a dime anymore"? When you think about the state of society and the future of our kids, it is enough to make a strong man shudder with fear and trembling. Do we really want our children to face what we know is a completely depraved and apostate society coming down the pike at us? We have no choice, unless End Time events spin out of control at warp speed, the anti-Christ is revealed and Jesus ends it all?

In the meantime, we have to live daily and plan and teach and guide our children. Now, more than ever, we have to teach the ways of the Lord with a more critical emphasis on Perseverance. This is the direction I sense the Lord leading me into. There is a strong Biblical reason for this. Jesus Himself says that "he who stands firm to the end, will be saved" (Matthew 24:13 NIV)!!!

What we're seeing today is the acceleration of the "Falling Away" predicted by the Apostle Paul in 2 Thessalonians....or the Apostasy. An apostate is one who has once believed something of the Truth of God in Christ, but like the parable portion of the seed cast on hard ground, his faith never really took root to become real!

More and more, with this happening, the horrible thing is Scandal of the American church slide into oblivion! It is not just the current issue over gay so-called "marriage" which is exposing the weak underbelly of today's so-called Christian leaders, but their entire modus operandi. These guys would rather build empires unto themselves with their mega-churches and programs than take a stand for Jesus and the Truth and then let the chips fall where it may.

This is nothing new. Apostate Jerusalem of 2600 years ago was in the same position we are in today. The rulers and the religious leaders mouthed words to the Holy God of Heaven, but behind closed doors, they bowed down to pagan gods and idols. The only difference in 2012 is this: the pagan gods and idols are pride, power, prosperity and plush pulpits. God sent the prophets Jeremiah and Ezekiel to warn them, to no effect. The LORD finally said "I looked for someone who might rebuild the wall of righteousness that guards the land. I searched for someone to stand in the gap in the wall so I wouldn't have to destroy the land, but I found no one (Ezekiel 22:30 NLT)


WHO WILL STAND IN THE GAP?

Who will stand in the Gap for the Lord? Since the death of the great American preacher/prophet David Wilkerson, no one is. Franklin Graham tries, but is constantly persecuted and put outside the tent. The current situation is a perfect example. The government says religious institutions have to provide free contraception and what we call, the abortion morning-after pill to women, under the new federal health care law. After the initial controversy in February where both Catholics and Evangelicals united against it, a "compromise" was reached and now, only US churches' Employers (like hospitals, nursing homes, christian schools etc) now, will be forced to provide the contraception!

Even though Baptist and other christian hospitals and employers will be affected, only the Roman Catholic church leadership is saying or doing anything about it! When the US president declared he was in support of gay "marriage", only the Roman Catholic Bishops, all single men by their church rules, are taking a stand! Forty three Catholic institutions have filed a Religious Liberty Lawsuit against the Contraception Mandate. Not one Evangelical operation has followed suit - no pun intended!

Instead, what do we have? Well, we have a controversy with the son of one of the pillars of American Christianity and Biblical Teaching (Dr. Charles Stanley). Andy Stanley is the leader of an affluent circuit of multi-campus mega-churches called NorthPoint. His recent sermon on May 3, 2012 has caused such a controversy that the 3rd most influential church leader in America is in danger of being seen as weak on defense of Biblical Integrity and Truth as the first two.

Apparently, Andy Stanley has refused to listen to counsel to explain his seeming glorification of the homosexuality, vis a vis the modern dysfunctional family, in this particular church issue. This occurred during his sermon where, from listening to the clip myself, it sounded as if he had a self restrained view of sin and made light of the entire mess....while correctly addressing the adultery part of that problem. You can watch the part of the Stanley message which caused the controversy here on YOU TUBE. The laughter from his congregation tells a lot of who far from God's Will we have slid away!

The bottom line is this. God's problem is SIN. In His Courtroom on Judgment Day, the charge against all of us is this - We have sinned against God. That's it! If we do not have the Perfect Son of God as our Advocate and Defense Attorney, as most of us do, the trial will not go well. This compromise and making light of the Word of God, to be in sync with a corrupt and perverted society is what is going to doom the American church on Judgment Day. Unlike what Stanley said in his nice-sounding message (to unsaved secular ears, that is),  Holy God does not care about what pundits and media say. He will have it His Way!

This kind of flim flam teaching is just one of the reasons why most of our youth lose their Christian faith, if they had any, the minute they walk onto a college campus. When over 57% of US evangelicals, who are supposed to be born-again Christians, tell George Barna they believe there are other ways to heaven than belief in Jesus Christ, the future American church is toast! These people are no more Christian than the parking lot of the church they go to and it is the watering down and compromise of hard, strong Biblical Truth which led us there.

The new thing with those in sinful lifestyles is that you not just have to love and welcome them (which is true) but we now have to affirm and accept that and then ignore the Bible and compromise the Word! If it is a choice between Conviction and Compromise, what will it be, my friends?

Who will stand in the gap for the Lord? Is our faith worth more than a dime anymore? To quote a line from the great Christian movie COURAGEOUS "where are you men of courage?!!" Yes, indeed.

"Here am I, use me!!!" Funny this comes today when I find my eldest son does not believe the way he used to. Apostacy is how you referred to. But he is coming to church tonight to see a speaker on the end times. Hopefully, he will turn. I believe we are so much closer to the rapture than anyone can even imagine!!! Woe to those who have ears to hear but do not listen!

I will pray for thy eldest son, my sister! It is indeed prophetic because the message in church this morning, from our guest speaker, was on the same End times topic of do not be deceived and don't lose courage! :-))
Each day is closer to the Prize of Christ and I pray for you as you minister to your wonderful family as well! Thanks for the comments and drop by anytime!!!