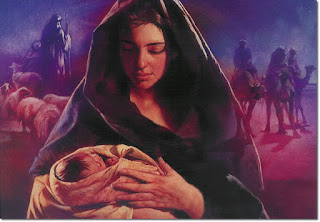 TODAY, THE CONCLUSION: MARY!
In honor of some of the more impactful mothers of the Bible, let’s take a look at four mothers briefly: RAHAB, RUTH, HANNAH and of course – MARY!
Rahab and Ruth were women of Dynasty.
Hannah was a woman of Dynamic Prayer.
Mary – the mother of Jesus – a woman of Destiny!
Three of these Four Women are directly in the Line of Jesus - the King of the Universe, LORD and Savior of Mankind!
MARY, a woman of Destiny:
A lot has been written about this young woman who was chosen by the Holy Spirit to carry the Lord Jesus during His onetime incarnation as God Who became man, so that the world may be saved!  The name Mary is derived from the Hebrew word Mariam and means “wise woman”!
From the beginning of Mary’s rendezvous with Destiny, she carried herself with wisdom, understanding and obedience.  Nothing she did suggested otherwise!

In the male-dominated culture she came from, where women could not even read the Torah, Mary’s God- anointed wisdom helped her through the most difficult time when it became known this most likely young woman was pregnant while engaged to a man called Joseph!

A few incidents in her life may have had her scratching her head, yet she remained humble and obedient, yet full of boldness and determination! Witness the following:

-       There was the time, when He was 12 years old that He disappeared after a short visit to the temple. Jesus was missing as the family were all heading back home from Jerusalem!!!  Jesus’ answer (to Mary) for being found teaching and interacting with the elders in the Temple (while he was 12!!!) is priceless: “I must be about my Father’s Business”!
-          During the wedding in Cana (John 2: 1-11), Jesus’ reaction to Mary’s may have seemed harsh to the unsaved eye but …well, here is Verse 10 “Jesus said to her, [Dear] woman, what is that to you and to Me? [What do we have in common? Leave it to Me.] My time (hour to act) has not yet come”.  Mary was acting like any good mother would by thinking her Son would make it right when the wine ran out!! He did!!  She completely ignored what He said in Verse 10 and went ahead telling the wedding hosts to do whatever Jesus said to do!
-          Jesus refused to see Mary and her other children in Matthew 12:46-50 because we all know his four brothers and two sisters did not believe in Him while He was alive! In fact quite the opposite! They thought He was mad and tried to take charge of Him and take Him home…so He just wanted to have nothing to do with them at that time.  You would think Mary would know better since she was told at the Conception, who Jesus really is! But her mortal side won out here, for the time being.
-         Contrary to some beliefs, Mary did not live and die a Virgin. She had other children. Her sons with Joseph (after the Firstborn Jesus was born) were James, Jude, Simon and Joses. His two sisters are not named. It is recorded that none of them believed in Him at the time. In fact when the Lord was dying on the Cross, He looked at His young Disciple  John (NOT His own brothers) and told him to take care of His earthly mother – Mary! This was Jewish custom and NOT Jesus declaring her as equal to Him or “co- redeemer”! Again His own half-brothers were nowhere to be seen because they did not believe until after the Resurrection. The eldest of the four sons, James, later ran the main church in Jerusalem and was killed by the Pharisees while Jude’s book is a masterpiece in only 25 verses!!!

These incidents throughout the Life of the Greatest Man Who ever lived do not detract from the heart of His earthly mother. Like Hannah, her true heart was revealed in her prayer (now called the Magnificat).

MARY’S PRAYER
While Hannah’s prayer was out of despair and brokenness at first and then praise later on, Mary was just aglow with Praise to Abba Father for His Amazing Grace in choosing such a humble woman, from poor origins, as her to be the vessel through which Christ the Savior of the World was to be born.

This prayer speaks for itself without commentary….remembering it is from the heart of the greatest mother who ever lived, who gave birth to the Savior Himself, yet needed His Redemptive act on the Cross to save her, just as He saved all the rest of us!
Amen.

“My soul magnifies the Lord,
and my spirit rejoices in God my Savior,
for he has looked on the humble estate of his servant.
For behold, from now on all generations will call me blessed;
for he who is mighty has done great things for me,
and holy is his name.
And his mercy is for those who fear him
from generation to generation.
He has shown strength with his arm;
he has scattered the proud in the thoughts of their hearts;
he has brought down the mighty from their thrones
and exalted those of humble estate;
he has filled the hungry with good things,
and the rich he has sent away empty.
He has helped his servant Israel,
in remembrance of his mercy,
as he spoke to our fathers,
to Abraham and to his offspring forever.”
Posted by The Bernie Lutchman Blog at 5/16/2012