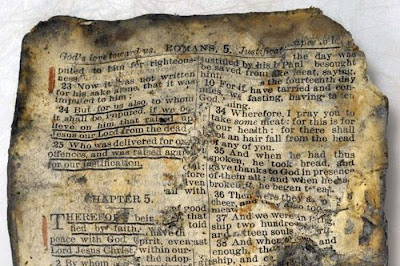 START YOUR OWN USED BIBLE DRIVE TO HELP POOR VILLAGERS WORLDWIDE
Do your best to present yourself to God as one approved, a worker who has no need to be ashamed, rightly handling the word of truth (2 Timothy 2:15 ESV)
Most Americans have a large number of Bibles sitting on their shelves with almost all of the collecting dust. There may even be a coffee table version adorning the center table in the living room, which may or may not be a family heirloom.


As more and more of our professing Christians ignore the Sufficiency and Timeless Principles of the eternal Word of God, we will see even less people with a Biblical Worldview. Why is this important? It is significant, because in these evil times, with every single one of God's commands, statues and the nuclear family under assault, we see a church and its pastors so weak that they cannot even defend the fundamental principles of Biblical Christianity.

However, in the extremely poor and needy Third World countries, there is a massive hunger for the Word of God. This led a friend of my family, and extended family - Steve Schmidt - to start LOVE PACKAGES in Butler, Illinois in 1975. Steve was called by the Lord Who showed him that the vast amount of used Christian literature sitting in his closet, could be used by folks around the world who could never afford the materials we take for granted and throw away here in America! Butler is about less than an hour away from my home, but has had such a massive impact on the world that Steve keeps getting requests from countries, now in the Western hemisphere, asking for Bibles and Sunday School materials!


Over the 37 years of this ministry, which has been featured in national media (both secular and Christian) most of the major evangelical publishers from LIFEWAY to Standard and others now ship Love Packages truck loads of resources (new and used) directly, which hundreds of volunteers sort out and package into easily identifiable skiffs for shipping in 20 Foot containers to more than thirty five countries! You can read more about this ministry and their outreach by clicking here: LOVE PACKAGES.


One of the stories I hear more and more from Love Packages and independent missionaries and even American Soldiers on duty in some of the past wars include people sharing pages of the Bible. There are people in far away villages who share pages from the same ONE Bible, then swap them after they are finished reading them and so on and so on, until the pages cannot be read anymore.


One poor woman was so proud of her Bible one day, she showed an American missionary her Ziploc bag full of SIX pages of the Holy Word! When the American gave her a copy of her own Bible, there were tears everywhere! This story is repeated many times around the world. We all know the stories of the Communist Vietnamese using the pages of the Bible for toilet paper and US GI's volunteering for latrine duty, so they could retrieve those pages, wash them off and saving them to read! In a small village in Ghana called Guno, we have a story which is repeated several hundred times worldwide - an ENTIRE VILLAGE with just ONE thoroughly-used Bible and THAT one, in the safe custody of the chief Village Elder!


I have been a Gideon Bible Society member since 1995 and been involved in Bible distributions in Colleges, nursing homes, outside High Schools etc and the apathy, outright hate and disrespect for the Living Word of God is incredible! U.S. Colleges are becoming more and more hostile to our outreach, even though we are legally entitled to stand on public streets and hand out free copies of the Book! Yet in Russia, the Caribbean, the Phillippines and elsewhere, we would be fortunate if the local pastor has ONE copy of the Word of God.


The bottom line of all of this - Cherish His Word. The more you read it, the more you will love it. When your bible has gotten so old and used because you read and study it so much, please don't leave it on the shelf, but start a used Bible drive in your church. Ask the church leadership to put out a box in the foyer and ask others to do the same. Then call up Steve Schmidt at Love Packages at 217-532-6701 and ask him how to get the package of used bibles out to him. The Lord will provide the means and fund to ship them out. In the meantime, pray for those who are less fortunate than you, and watch the blessings flow! Amen.
Posted by The Bernie Lutchman Blog at 5/25/2012

God Bless him. I might have some used bibles around my house.

This reminds me of how God used Brother Andrew, God's Smuggler. Thanks for all that you do for Christ Bernie.. Slam-

Thanks for the comments all week, brother Derrick! You are correct about Steve! God bless YOU and all you do as well, sir!

@Tim - yessum about Brother Andrew, hoss! :-) Thanks for all you do as well, SLAMMMM!

Have a most blessed and safe Memorial Weekend, gentlemen!!