FOUR GREAT MOTHERS OF THE BIBLE! 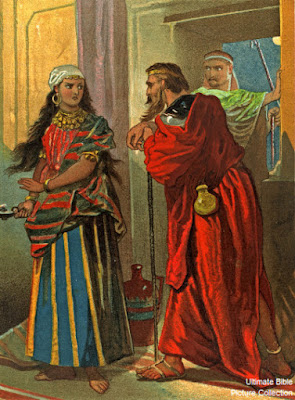 TODAY: RAHAB
Each year,  as we celebrate our mothers, it’s always a delight to look at some of the amazing women in the Bible and the major role they played in the chain of events, which gave us the Greatest Story Ever Told!
We all know and believe we have the greatest mom ever, and that is as it should be!!However, how did some of the more unlikely women of the Bible ended up affecting so much that means, literally the world, to so many?

The answer is – we don’t know! God chooses whomever He pleases to do whatever He wants in the Timing of His Own choosing, period! As He says “My Ways are NOT your ways”, declares the LORD.
Therefore, in honor of some of the more impactful mothers of the Bible, let’s take a look at four mothers briefly: RAHAB, RUTH, HANNAH and of course – MARY!
Rahab and Ruth were women of Dynasty.
Hannah was a woman of Dynamic Prayer.
Mary – the mother of Jesus – a woman of Destiny!

Three of these Four Women are directly in the Line of Jesus - the King of the Universe, LORD and Savior of Mankind!

RAHAB, a woman of Dynasty:

The story of Rahab, the gentile prostitute, begins in Joshua Chapter 2 as she comes on the scene when Joshua sends two scouts into Shittim to view the land of Jericho for the Israelites. The King of Jericho found out about it and sent his secret police into the town to find the Joshua’s men.

Rahab had heard of the Mighty God of Israel, as had all the people in that region who encountered God’s General Joshua, to their everlasting misfortune!  The two men showed up at this prostitute’s house, whose heart had been on fire after hearing about this Great God in Heaven. We all know the rest of the story - Rahab hid Joshua’s scouts from the pagan King of Jericho and saved their lives.

But what is so relevant to Rahab's story is her testimony here….as we pick up the passage "...and said to the men, “I know that the LORD has given you the land, and that the fear of you has fallen upon us, and that all the inhabitants of the land melt away before you. For we have heard how the LORD dried up the water of the Red Sea before you when you came out of Egypt, and what you did to the two kings of the Amorites who were beyond the Jordan, to Sihon and Og, whom you devoted to destruction. And as soon as we heard it, our hearts melted, and there was no spirit left in any man because of you, for the LORD your God, he is God in the heavens above and on the earth beneath.

Now then, please swear to me by the LORD that, as I have dealt kindly with you, you also will deal kindly with my father's house, and give me a sure sign that you will save alive my father and mother, my brothers and sisters, and all who belong to them, and deliver our lives from death.” And the men said to her, “Our life for yours even to death! If you do not tell this business of ours, then when the LORD gives us the land we will deal kindly and faithfully with you.”Then she let them down by a rope through the window, for her house was built into the city wall, so that she lived in the wall. (Joshua 2:9-15 ESV)

All of this represents a completely changed woman from her former occupation! Even though Scripture still called her Rahab the Harlot in Joshua 6:17, let us fast forward to the New Testament to see how the Holy Spirit describes the new creature who was in the only group of people saved from destruction in Jericho!

SO WHAT HAPPENED TO RAHAB?

She is mentioned in James 2:25 as a woman who was made right by her act of hiding Joshua’s men.
Then she has a surprising appearance in the Hall of Faith in Hebrews 11:31 (ESV) “By faith Rahab the prostitute did not perish with those who were disobedient, because she had given a friendly welcome to the spies”

Even more exciting than her appearance in the Hall of Faith is Matthew 1:5 which places Rahab directly as the mother of the great Kinsman- redeemer himself – Boaz! Who is Boaz? Read the next section on Ruth.

Of all the great Tribes of the Israel and the nobles and elders, the Lord chose a poor little Gentile harlot – Rahab – to be the great-grandmother of none other than – KING DAVID! AND if that was not big enough, Rahab’s husband Salmon goes all the way back to Abraham!
Rahab is one of the most Godly and exceptional heroines of the Bible!!

Photo Credits: http://bibleencyclopedia.com/pictures/Joshua_2_Rahab_and_the_spies_3.htm
Posted by The Bernie Lutchman Blog at 5/12/2012