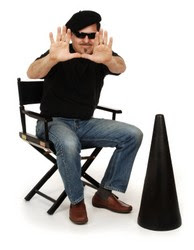 DIRECT YOUR OWN MOVIE...REMEMBER YOU ANSWER TO THE PRODUCER!
Part 2
by

Evinda Lepins
Isaiah 33:22(NLT)
For the Lord is our judge,our lawgiver, and our king.He will care for us and save us.


So were you able to determine what style of director you are over your own life? Let me give you another scenario that will get us a bit closer to our words of wisdom for this month. Imagine watching a director on the set as he/she directs the movie. You might hear such words as, “nice,” that’s good,” no, look this way,” and you just may see him or her throw up their hands in exasperation before shouting the words, “cut!” But here’s the goofy thing. Instead of the director going over to the cast, he walks off the set and goes down to the next one and hops up there and begins to direct that movie. That would be kind of ineffective, don’t you think?


Now let’s reel this in closer to home. Isn’t that exactly what we do with our own movies, our own lives? If we don’t like what’s going on within us, we move to someone else’s movie, some one else’s life and begin trying to direct their movie. Just as soon as we get there, we discover some bloopers so we begin directing them in what to do or what not to do. For one reason or another, it just seems more comfortable over on their set, sitting in their movie, getting comfortable in their business and easing on in to their director chair.


In Matthew 7, verses 1 & 2, Jesus Himself is warning us about this. His words are: “Judge not, that you be not judged. For with what judgment you judge, you will be judged and with the measure you use, it will be measured back to you.” Every time I read that verse, the reminder stings just a bit, not just for me but for others as well. Before I personalize this a bit, let’s look up that word “judge” in the Greek concordance.

So in the context of this verse, as a verb it means: to distinguish, choose, to give an opinion upon, and sometimes it denotes to condemn. It also means to separate, to pick out, select, and finally, to pronounce an opinion concerning right and wrong. CUT – I mean STOP! REWIND!

That last one right there is a doozie, huh? Here’s where we get into a bit of trouble, and I’m in no way pronouncing an opinion of right or wrong out of context!

I remember years ago, before I even started my unpacking process, and even in the first couple of years of unpacking, everybody else’s movie was easier to direct than my own; that is until I read this scripture and its truth splashed conviction in and through the very depths of my soul. I couldn’t ignore this simple truth found in Matthew 7.


The more I began to focus on my own movie, my own process, the less concerned I was with everybody else’s movie. I mean it didn’t happen with a snap of the fingers; it took awhile — as everything does for me

— but I did come to learn that much of what I criticized in others was really the criticism I needed for myself.


Think about this for a moment: The characteristics, habits and behaviors that bother us in others are often the same things we dislike in ourselves! Our unchecked, unproductive and often self-destructive habits are often the ones we collide with in others in hopes that we can direct them to change!


Okay, that wasn’t meant to sucker-punch you, so I’ll let you go for now and I will wrap this up tomorrow. Before you go, can I encourage you to think about, and jot down, the people whose movies you are trying to direct? If you struggle with that question, go to the Producer.