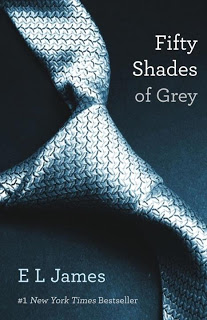 If you ever wondered why the latest movements inspired by evil - from HARRY POTTER to TWILIGHT to FIFTY SHADES OF....whatever - have captured the hearts, minds of souls of an entire generation of mostly women and teenage boys, look no further than the absence of real men who were supposed to leading their homes, churches and community.

Just for the record, and for those who think people like me are bible thumping extremists, tell me what is wholesome about a worldwide phenomenon written by a wiccan (JK Rowling of Harry Potter); a Vampire series by a woman (Stephanie Meyer) who said she was given the story by an "angel of light" (whom the Bible calls Lucifer) and the biggest selling book in the world (other than the Bible) - FIFTY SHADES OF GREY Trilogy.

The Fifty Shades Trilogy is written by a former British studio manager (at a film school) named E.L. James who admitted the characters in her corrupt book are based on the Twilight series! So you see where all of this is heading!
CLICK HERE TO READ ABOUT THE DANGERS OF PARENTS LETTING THEIR TEENS WATCH THE TWILIGHT MOVIES OR READ THE BOOKS.

CLICK HERE TO READ OF THE PERVERSION OF YOUNG MINDS BY THE FIFTY SHADES OF ...(GREY ETC) BOOKS BY E.L. JAMES BY GIRLSGONEWISE.

CLICK HERE TO READ A WONDERFUL PIECE BY A YOUNG MOTHER - DANA SUGGS.

It is one thing for them to publish and promote their evil over there, but with over 60 million copies of the Fifty Shades of pornography sold worldwide, we know that a lot of North American women are reading the filth. From a lot of reports, it would appear that a lot of "Christian" women are reading this Fifty Shades books and justifying it as having been written by another so-called "Christian" woman- E.L. James! Anyone who writes pornography based on a demonic-inspired Twilight series is NOT a follower of Jesus Christ, period.

It is fascinating that some of the biggest criticism of the James' books are women! The powerful GirlsGoneWise blog critique is fantastic and should have been done by Christian women leaders like Beth Moore or Joyce Meyer. Here is another one written by a young mom DANA SUGGS! These two outstanding female perspectives speak for themselves and reveal the shortcomings of the people of God who are silent, not just with this, but too many other things - while the world around us go to hell in a hand-basket!

The question is, apart from Mark Driscoll (the outspoken pastor of Mars Hill Church in Seattle), where are America's men and church leaders speaking out on this, being watchmen on the Wall of the souls of their children and warning the people? Where are you men of Courage? Where are you speaking out against the degradation and filth from movies, music and now books which are corrupting the minds of your wives and daughters, while you say nothing?! God will hold you accountable for this, one day. Wouldn't it be better to speak out now and save yourself grief on Judgment Day?.....Just saying.......! You don't have to buy or borrow the book to know what it is...just open to any page at Target or Walmart and you should wonder why a Christian would read that and call, even 1/2 a page, "enlightening"!

God’s plan is to make you holy, and that entails first of all a clean cut with sexual immorality. Every one of you should learn to control his body, keeping it pure and treating it with respect, and never regarding it as an instrument for self-gratification, as do pagans with no knowledge of God. You cannot break this rule without in some way cheating your fellow-men.
And you must remember that God will punish all who do offend in this matter, and we have warned you how we have seen this work out in our experience of life. The calling of God is not to impurity but to the most thorough purity, and anyone who makes light of the matter is not making light of man’s ruling but of God’s command. It is not for nothing that the Spirit God gives us is called the Holy Spirit. (1 Thessalonians 4:3-8 PHILLIPS)

That book and any of the others you mention bro., will ever cross the threshold of my house or my car door! It is a matter of sanctification. Many, believers are still babes in Christ. If they were truly saved from their heart they have either been sold a "bill of goods" that teaches just attend church and live life as usual or they have never been discipled and they were never taught that salvation is just the beginning of a life-long relationship with God. Unfortunately, the lost observe this and they do not see the benefits of being Christian. Christians who are not living the "Christ-Life" are under the discipline of God. Their lives will be characterized by just as much struggle as the lost because God's favor is not resting on them in their backslidden state. On the other hand believers who are walking in obedience to God see less struggle and use what does come their way as a stepping stone to greater dependence on God and as a help to comfort others who face the same trials. Honestly, I believe with all my heart-even more and more as the days pass- that the key of keys to the Christian life is obedience. It is the golden key that dangles before all believers but few reach out to use it.
God Bless!!