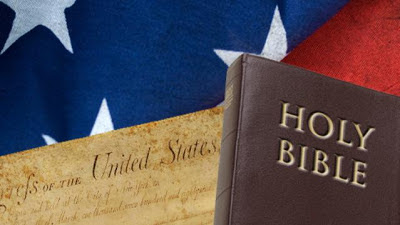 "So if the Son makes you free, you will be free indeed"...John 8:36
"It was for freedom that Christ set us free; therefore keep standing firm and do not be subject again to a yoke of slavery"....Galatians 5:1
Fast forward to the Constitution of the United States: "Congress shall make no law respecting an establishment of religion, or prohibiting the free exercise thereof; or abridging the freedom of speech, or of the press; or the right of the people peaceably to assemble, and to petition the Government for a redress of grievances" (FIRST AMENDMENT")

We have absolute proof that 1. Absolute Freedom comes from the One True God of Heaven and 2. It is guaranteed by the highest Law in the Land. 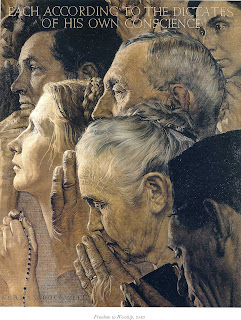 Since the dawn of time, man has tried to oppress other men...to take away freedoms endowed and bestowed by God, in order to promote selfish agendas. Today is not different. While these people come and go, in the course of 5773 years of creation, their evil legacies live on and will only be resolved when Messiah - the true Commander in Chief  of the World - Jesus, returns.

Jesus set us free from the yoke and bondage of sin, if we repent and put our trust and faith in the Lord and Savior. He did this on Calvary. No human (or demon) can take that away. The Founding Fathers gave all, along with the Continental Army, and guaranteed that Freedom, not just in the Bill of Rights of the Constitution, but here in the Declaration of Independence "We hold these truths to be self-evident, that all men are created equal, that they are endowed by their creator with certain unalienable Rights, that among these are Life, Liberty and the pursuit of Happiness".

Yet in the pursuit of death - abortion on demand, we have an American government mandate that the people of God violate their God-given freedom to "free exercise thereof" and pay for readily available contraceptives, if they are employers. This includes ANY religious and christian- based hospital; university; bookstore; hotel; BIBLE Publisher  and more! Included in these contraceptives mandated by the secular, increasingly anti-Christian government, are abortion pills or pills that induce abortion immediately after sex (aka...the "morning after" pill). This is not the act of Christian people, or followers of Christ. This is power gone mad and an stunning acknowledgment to the abortion industry led by Planned Parenthood and others.  If this is not stopped by the Courts and/or Congress, which has a duty under the First Amendment to protect Religious Liberty, next will be the ability to preach from pulpits from Bible! There are already politicians and liberal "christian" theologians, who in their support of gay "Marriage", want to ban Romans 1 from being preached. Already in Canada, priests have gone to jail for that. In Canada, pastors and priests are being told by secular authorities they MUST perform "marriages" of gay couples, regardless of what the Bible says or conscience. This is the slippery slope on which the United States is heading, if personal and religious freedoms, guaranteed by the US Constitution and underlined by the Word of God, are not protected NOW!

So Father in the Name of Jesus, we know You said that in this world, we will have many troubles, trials and tribulations and that You have overcome the world, but for the first time ever in America, we see its own government violating not just the Founding document of the Constitution, but we see them spitting in the Eye of Christ and all that is holy, but demanding YOUR people pay for the furtherance of the evils of Abortion and an immoral lifestyle. Father, first of all, we pray this evil policy into Your Hands knowing that once the solution comes from You, there is no appeal! We pray for the protection of innocent life from the purveyors of abortion who are Planned Parenthood and Marie Stopes and from those who are promoting it in the public square. We pray for Your people who run bed and breakfasts or photography services etc and refuse, on Biblical grounds, to do so-called gay "marriages" then get persecuted by society and local courts and governments. Lord we know their reward is in heaven, while those who persecute them will be sent to eternal judgment away from You, but we pray that they will continue to do as the Bible says that they will continue to "keep standing firm and do not be subject again to a yoke of slavery" of those who support evil and call it good.

We pray for leaders of government, the social compact and even those so-called religious leaders in liberal "christianity" who are not different from Caiaphas and those who persecuted the Lord Jesus, because every act done against Your Word and Your unborn babies - now up to 54 million since 1973 - is an act against You. We pray that even though they know they are violating Your commands and decrees, that they will cease this, repent and be saved. Lord, we also pray for those church leaders like the Roman Catholic bishops who are out there this morning proclaiming the Gospel of Life and liberty across America, while Your protestant preachers stay silent ....and especially those who command popular acclaim. Father, bless those bishops and priests who speak Your Word from pulpits this day as well as men like Billy and Franklin Graham and the few solid local preachers around the country, who are putting those big name preachers to shame, by their bold stands for Biblical integrity and life. We pray for men who will stand on Romans 1:16 and really mean it, when they say "I am not ashamed of the Gospel", Lord. We pray You gave them courage and boldness but most of all, You give Your elect and those who stand for righteousness a double portion of Grace, Power, Hope, Love, Protection and Covering in the Shadow of Your Wings, in these evil times...until such time, as the Lord returns, in Jesus' Holy Name, amen.