Look at these headlines from BLACK FRIDAY 2012 (the "biggest shopping day" of each year - the day after Thanksgiving) and weep:


These are just some of the outrages in a twelve hour period, from Thanksgiving 2012 night to noon the next day! (Links are compiled by the DRUDGE REPORT). At some point in our lives, almost everyone of us has gone to a store early on the Friday morning after Thanksgiving to find a deal. I remember doing that once years ago, to buy a Nintendo Gameboy for my son (over 12 years ago) at 5am; not getting it after waiting in line for two hours....and never joining this madness again - ever again!!

Compared to the days of over a decade ago, what has happened on Black Friday in the past two years is total anarchy! Combine this with the scenes of formerly wealthy people in the New York/New Jersey areas hit by super Hurricane Sandy, losing all their property etc, and wandering aimlessly for food and water, we are seeing a preview of what America will look like before and during the coming Great Tribulation! 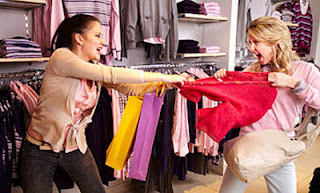 There is nothing on God's green earth to justify any of the behavior reported above, by people, who say they're getting ready to celebrate "Christmas" ....or the birth of the "Prince of Peace"! How about that! In fact, from the way most of these unruly shoppers (and some of their more upper-class counterparts) conduct their lives, they are as far from the Real Prince of Peace - Jesus Christ - as are the atheists, who are trying to wipe out Christianity and God in America! You can guarantee, from surveys taken, that the same people who will rush to buy a 40 inch Vizio TV (which is a great TV, by the way), would then expect the government to give them free contraceptives and abortion pills...but I digress.

What does this say about the soul of this country? It says we are lost, lost, lost and full of misplaced priorities. We now have two generations of people who grew up under an education, cultural and political system with no morality, decency, Truth or the correct view of God. We have a false spirituality led by Osteen, Oprah and every false religion under the sun, with very few real preachers of the Word of God, being the Voice crying in the Wilderness.

Where does all of this get us? Nowhere! If we survive the pagan Mayan prophesy of the end of the world on December 21, 2012, we will be back next year - on Black Friday 2013-witnessing the same outrage once more...or worse. All the "stuff" that people are seemingly selling their souls for now, will be either worn out, broken or worth nothing.

Would the long lines, in cold freezing weather, enduring pushing and shoving by smelly and half-crazed people who haven't brushed their teeth in 48 hours worth it? No! You know what is? Well, that would be (in addition to sleeping in your own bed) - the peace, joy, contentment and understanding that Jesus Christ is your Lord and Savior....and He is all you need - Q.E.D.....proven, over and out!