DAY 7
DON'T BELIEVE THE FATHER OF LIES
But the serpent said to the woman, “You will not surely die. (Genesis 3:4 ESV) 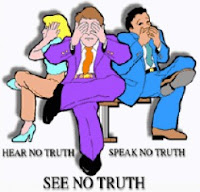 Before the woman bought the first-ever deception from the serpent of old - Lucifer - in the Garden of Eden, she had to buy the first-ever lie ever told. Thus began the greatest war of all times - the War between Good and Evil.  That lie has had the biggest impact on the history of mankind and reverberated through History. It is a war which will culminate in the Reappearance of the Creator - Jesus Christ - as He lands on Mount Zion, one day soon, to reclaim that which is lost.


In the mean time "we do not wrestle against flesh and blood, but against the rulers, against the authorities, against the cosmic powers over this present darkness, against the spiritual forces of evil in the heavenly places. (Ephesians 6:12 ESV)  By the way, if you go back to late August-early September 2011 (HERE), you will find a complete explanation of this hierarchy of hell as laid out in the Bible in Ephesians 6:12. This is important as we wind up Week 1 of A Fortnight of Prayer - 14 Days or Prayer and Fasting by both Catholic and Evangelical churches in, and for America, as well as prayer by saints worldwide from Canada to South Africa - for the entire Body of Christ. We have shown, in this site, that our Prayers are for everyone and everything the Spirit leads us to - from Marriages to Salvation of the Lost.


Let us recap briefly what we have done in the past week:
1. Recognize the Calling and Commission to Pray and Fast, from Jesus Christ Himself.
2. Realized our helplessness before the Lord, unless we live a FULLY repentant lifestyle.
3. Revived our walk with our Best Friend - Jesus - as He has rejuvenated and restored us.
As a result of all of this, we are ready now for the hard work of pressing in for Freedom, through Intercession - praying for others; for Christian Liberty, for Religious Freedom and for the Return of the King!


It used to be there were only two things certain in life, according to Mark Twain - death and taxes. Add higher fuel and food prices to that! Add higher costs of education and the American Dream to that! Add anything you can think of, which make our daily lives easier than it had to be for our ancestors, even less than 100 years ago. Now, look at the lie we have bought about this so-called Dream rather than BELIEVE the Word of God "and all these things will be added unto you"!


We are now seeing the House of Cards starting to collapse with no foundation under it. The quiet desperation of many is so obvious it is mind boggling. The hopelessness because of the lies of man and his politicians, who sold multiple generations a bag of fake pearls is palpable. The lie that there is a free lunch, served up on expensive china, while living life in a hammock (under a coconut tree) has not only been sold to Americans, but in Europe, as well, which is collapsing under heavy debt, unemployment and taxes. The lie was that we can have all of this and somebody else would pay for it. The only gift that we really never had to work for and which Someone else paid for, is the Free Gift of Eternal life through Christ's Sacrifice on the Cross!


Yes, my friends, we bought the Big Lie because, as Jesus told His Disciples, we neglected His Words here: "do you not yet perceive or understand? Are your hearts hardened? Having eyes do you not see, and having ears do you not hear? And do you not remember? (Mark 8:17-18 ESV) So, therefore, please pray with me right now:


Father, in Jesus' Holy Name, we are so sorry we have deceived ourselves into something which we may have known deep inside to be questionable. Father, week after week, we sat in Your churches around the country and globe and thought if we followed the formula, we too could have the successful and prosperous life which we see others having or which our forefathers may have had. Lord, with each successive generation, the expectations of more and more people are for big salaries, faster cars, sleeker condos, more high-tech electronic toys and the paid vacation-time off to enjoy all of this in the resort town of our own choosing. Lord, yes, we bought the lie of the inappropriate commercials on TV and the brainwashing of the culture.


As is now obvious, oh God, finally more and more are coming to the realization it was all a pipe dream. As more and more of our young people and children move back home with broken dreams and broken bank accounts due to high college debts, put upon them by a parasitic college system, help us to learn from this deception....and to see through many of the fake solutions now being proposed by those who got us into this horrible estate in the first place! To make it worse, my God and my King, when we need You and Your Word more and more in the marketplace, in our schools, in our combat zones in Afghanistan and in the lonely aircraft carries and army bases, we are being told that YOU - the Creator of the Universe and the Father of ALL things....the Owner of  all the Cattle on 10,000 Hills, the One Who hung the moon and the stars....Lord, we are being told and expected to bow down to, the increasingly harsh philosophy that we not only DO NOT NEED You, oh God my Savior, but that we had better not talk about You or Pray in the Name of Jesus if we are military chaplains or opening a session of the local Town Council! And Lord, to make it worse, many in Your so-called church, are compromising with this Deception to show that they too are tolerant, and "in tune with the times"!!!


Father, I reject that in Jesus' Name. Lord, help us to reject the lies of the enemy that we should keep our "Faith" behind the four walls of our church and not walk it out the other six days of the week. This is the same deception from Genesis 3 because it leads to spiritual death and separation from You. Lord, give us the boldness, courage, fortitude and ability to live through these evil times, when we are constantly told to hide our Bible; not pray in public and to not mention the Name of Jesus...so we can be seen to be "tolerant", when this is PRECISELY what this dying world needs now to get through these trying times, before the man of sin is revealed and events lead to Jesus returning to reclaim His Creation. Father God, I bow down and surrender all my mind, body and soul to Your control that this may be accomplished and that I will see, along with Your saints worldwide, that ALL GOOD THINGS COME FROM THE FATHER OF LIGHTS - YOU, and that nothing eternal or precious comes from following the powers and principalities of darkness, in the Strong and Mighty Name of Jesus the Lord, amen and amen!

Email ThisBlogThis!Share to TwitterShare to FacebookShare to Pinterest
Labels: believe, crash, creator of all things, deception, encouragement, ephesians 6:12, father of all lies, garden of eden, genesis 3:4, hope, hopelessness, no free lunch, the Father of Lights, war between good and evil