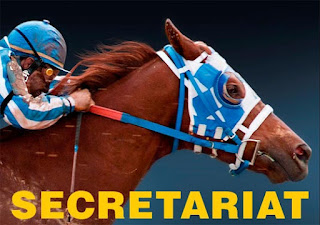 "But I have this against you, that you have abandoned the love you had at first"...Revelation 2:4
A lot of people - men and women - appear to make through life intact, but then fall apart at the end (or close to it). Think of it as a runner, who runs out of steam right at the Finish Line.  Many are the opposite of the great Triple Crown thoroughbred horse - Secretariat. Secretariat won the third jewel of this Triple Crown of horse-racing by a stunning 31 lengths, a feat which as never been repeated! This magnificent creation of God was going so fast, it could have gone another dozen or so lengths...but it would have died! The faster the horse went, the faster its heart was beating. If the distance was any longer, the heart would have exploded.

This is contrary to how many finish the race of life today. We do not give it all we have. Many have built their lives on one of the following:
-  A lie (whether it is in a loveless marriage, dead end job, or even a double life of sin)
-  A false promise (the western or American dream of a high paying job/lifestyle that makes you happy)
-  A misconception of what we are really here for (are we here to satisfy ourselves or satisfy God's calling on our lives).

For some reason, less and less of us are giving it all we have as we see the finish line.
We are seeing men and women getting divorced in their late 50's or 60's whom you would never imagine would 'go there'.
We are seeing people coming out of closets who have been living in sin, with their lies and their sexual deviancy for decades.
We are seeing churches filled with carnal Christians corrupted by culture because there was no conversion to the Gospel of Christ to begin with.
We are even seeing so-called good churches producing the future 'pagans of America' by sending out youth into high schools and colleges to turn their back on our faith, because they came of out of churches led by preachers more interested in maintaining their own stranglehold on a church and organization, which was/is not theirs to begin with.

Solomon was that kind of man. He finished horribly because, among a variety of disgusting sins, he turned his back on the One True God Who gave him everything. Solomon sought after his own fleshly pursuits by trying to sleep with just about any woman of every color, class, creed and strange religion he could find.

He not only had illicit sexual relations with them, he brought them into Jerusalem and corrupted the Holy City.
He not only consorted with them, he bowed down to their evil strange and demonic gods of fire, human sacrifice and death.
He not only did all of that, but had a stranglehold on the economy of Israel.
He was a horrible taskmaster who taxed the daylights out of his people so he could live like the flesh-serving king he was.

We are no different today. While the culture shapes society, we help it by buying their indulgences.
We pursue leisure.
We pursue the latest toys.
We pursue pleasure.
We preach restraint..for everybody else but ourselves.
We mortgage the future to satisfy the present.
We give in to almost every sensory temptation...and some go even further in violating their marriage vows....and on and on....all in pursuit of the good life....and all is vanity!

You want to know how both Solomon and we get to the point were we become the anti-Secretariat? We get there because we have left our first love - Christ.  As a society and an "Ekklesia" (the body of Christ - the church) church leaders from all levels, in the past 100 years, have pursued the culture, and tried to blend it with Christ. It has never worked...and never will.