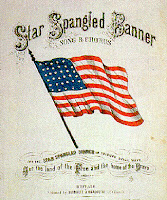 Recently radio talk show host Bill Press went on a rant about how it was his mission to "Change the National Anthem".  (I know, crazy talk right?...) Yup he did say it and a whole bunch of other things.  Things like it was: un-singable because it has two octaves, the words do not mean anything and are offensive, yada yada yada yada, it was a complete muckery sandwich.
Feel free to listen to his debacle here:Bill Press Rant.  Something else most of my readers know, is that Greek Girl loves her country.  I admit it, I'm an old fashioned girl with simple values, and there are two things you do not mess with in my coconut: Respect for Our Country, and our Military.  Good men and women fought and died for our freedoms.  Maybe Bill Press skipped the history section where they taught about America and our Founding Fathers when he was in school, but the Greek Girl did not.
Imagine, some silly talk show host has the audacity to spat in the eye of the Men and Women who shed their blood for our country. Our National Anthem has a very deep meaning, no not from "modern day" living, but from our Revolutionary Roots.
Our forefathers would be ashamed to hear someone belittling something so sacred. Sorry Bill Press but you are wrong.  The fact that our modern culture is full of people being rewarded who can not sing and then they get up and do silly things like sing our National Anthem on TV with the lyrics written on their hands or flub the words and worst of all sing it off key, doesn't mean the "song" is bad.  It simply means we should stop giving people a pass just because they are a "celebrity" or they showed up on a reality show and are all of the sudden a "singer" - just sayin.
So when my very talented good friend Alfonzo Rachel from "ZoNation" asked me to sing the National Anthem with him I was honored and thought it was a great idea.  Check out Alfonzo's website at: www.machosauceproductions.com  We decided to show Bill Press that it's not the songs fault that some chose to sing it disrespectfully.  The song has a very special and deep meaning to anyone who loves America and values the sacrifice it took to build it, make it free, and to keep it Free.
Yes there are plenty of other patriotic songs that are wonderful, beautiful even, and we love and cherish them as well.  They all have their place, but our "National Anthem" is our National Anthem for a reason.  America did not just suddenly appear of out osmosis.  It was born from struggle and from a people who yearned to be and live free from tyranny from the oppressive rule of a Monarchy.  It was a hard fought and yes ugly and bloody battle.  The words in the song reflect the magnitude of what was done to give us our free America.  The flag "The Star Spangled Banner" was and still is a symbol to so many who fought in that battle, and it is very sacred.  I mean hello... I can't imagine Bill Press hasn't seen the movie "The Patriot".  Even someone who might not share all my values should be able to get an idea of what it took to make us America and why the lyrics would have meaning.
THE STAR SPANGLED BANNER (by Francis Scott Key):


Oh, say can you see by the dawn's early light
What so proudly we hailed at the twilight's last gleaming.
Whose broad stripes and bright stars thru the perilous fight,
O'er the ramparts we watched were so gallantly streaming.
And the rocket's red glare, the bombs bursting in air,
Gave proof through the night that our flag was still there.
Oh, say does that star-spangled banner yet wave
O'er the land of the free and the home of the brave.

So if you agree with Zo and I and are sick and tired of people trying to change America, and think our National Anthem should stay the same, by all means please feel free to share this video above with your email, facebook, twitter, all the usual suspects.  That is your mission should you chose to accept it! GOD BLESS AMERICA!!!!
Blessings, Love & Music ~