HOW NOT TO BE A FATHER

SUNDAY- HOW TO BE A GODLY FATHER 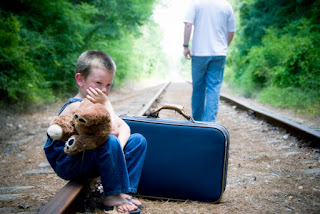 King Henry IV, having seized the throne of England, from the equally pathetic Richard II and had him murdered, was having trouble sleeping and wondered, according to William Shakespeare, why other men (who had done worse!!!) could sleep while he - Henry IV- could not. Shakespeare then quoted this famous line "Deny it to a king? Then happy low, lie down! Uneasy lies the head that wears a crown (Henry IV, 1597).

The offspring of Royalty are usually a bunch of spoiled brats, whose fathers were too busy being "King" and denying themselves nothing - whether it is the beautiful women of other men; gold and jewelry or lands and tribes to conquer. We don't have to look to Bible history for an example - look at Prince Charles of England. Not happy with Diana as his wife, he had to go after Camilla Parker Bowles - then married to another man....all in plain view of his sons and the world.

Romans 15:4 NLT tells us "Such things were written in the Scriptures long ago to teach us. And the Scriptures give us hope and encouragement as we wait patiently for God's promises to be fulfilled". This is why we look to the examples which the Lord provided for us, as to how we should or should NOT live! Hence the reason we look at these two great kings of Israel. What these men did, as fathers, have affected the Middle East and history for 3000 years now. Kings David and his son (by Uriah the Hittite's wife, Bathsheba), Solomon, are exhibits A and B of fathers whom God will never want us to be like! If you wish to learn to be a true worshiper and live in repentance, then David is your man! For Proverbs to live by, Solomon is your man. For advice on Fatherhood, run the other way from these men!

In all the kings of Israel, there was no one more faithful and worshipful of God than King David. Just look at the psalms he wrote.  The Lord Jesus comes from the House of David.So what happened? Well, the young teenage warrior whom the Lord empowered to kill Goliath with a strategically placed stone, between the eyes, had a problem with his eyes and women.

Six wives were not enough, he had to go after the beautiful wife of one of what the Bible called “David’s Mighty Men” (See 2 Samuel 23:8-39 & 1 Chronicles 11:10-47). David lusted after Uriah’s wife, impregnated her and then had one of his best friends and the Mighty Men – Uriah – murdered, so he could have her.

Most kings and rulers over time never have time or purpose to be Biblically sound fathers and parents. Kings always send their kids to the best schools; hire the best nannies and staff to ensure only the best for their offspring.
King David was no different. Look at the list of his sons above, each of them had a different mother. So it was no shock when Amnon, his oldest son, set out to seduce and proceed to rape his own poor beautiful sister Tamar.

It was also NOT shocking that David did NOTHING about it! Here is his only daughter brutalized by his oldest son, his only heir at the time, and NOTHING, nothing from the man whom we know, wrote all the Psalms and prayers under the Power of the Holy Spirit!

When he was 45 years old, he had Uriah killed and married Bathsheba immediately afterwards. His other son, Absalom, witnessed all of this and years later, led a rebellion against his own dad – David!  Absalom also fulfilled the judgment pronounced by God against David after God sent Nathan to expose David’s crimes. God said He would punish David by letting others sleep with David’s wives in public to shame him…..Absalom, David’s own son, was that man!

David was a man after God’s own heart, whom the LORD still loved and referred to as His faithful servant throughout history! What we should want to do is follow the David of the Psalms who loved God with all his heart and will return with Christ one day, just like Uriah and Joshua and all the great warriors of God! Yet as a man and father, he is the biggest example in the Bible of How NOT to be a Father.

The son of Bathsheba and David, after the latter’s marriage to her, Solomon was favored by God immediately. The Almighty promised to bless Solomon forever if Solomon obeyed all the Precepts of God, and loved God, just like his father – David – did.

Solomon did just that – for a time. He prayed for wisdom, God gave Him wisdom. He prayed for discernment, God gave Him riches. And if that was not enough, God gave him worldwide fame. In all of history, there was never a more popular and wealthy king like Solomon. Kings and queens came from far and wide to visit and see for themselves, the great King Solomon.

Like his father however, he had a major flaw – women! UNLIKE his father, David, the gentle and wise warrior king, allowed these women to turn him from the one true God in heaven.

He got off on the wrong foot, right off the bat, marrying the daughter of Pharaoh of Egypt….the same Egypt of sun gods, animal gods and more. He built Asherah poles for some of his 700 wives and more…...”King Solomon of Israel had built shrines for Ashtoreth, the detestable goddess of the Sidonians; and for Chemosh, the detestable god of the Moabites; and for Molech, the vile god of the Ammonites” (2 Kings 23:13 NLT).

The poet and teacher of Israel who wrote the book of Proverbs, Song of Solomon about the love and power God for teaching and everyday living, ended up writing Ecclesiastes about the meaningless life of pleasure and lust he lived. Even worse, is what he taught his sons.

When his son Rehoboam succeeded Solomon after his death, the wise elders of Israel warned the new king to be civil to the people. Solomon had taxed the people heavily and laid heavy burdens on them to support his extravagant lifestyle.  Rehoboam ignored their sound advice and doubled down after listening to his rich young friends.

He then caused the Kingdom David and Solomon inherited from Saul and Samuel to split. The seeds which Solomon sewed bore very bitter fruit and led to centuries of pagan kings and rebellion against God. Finally the Lord had enough and wiped out the northern Kingdom and its 10 Tribes completely by sending in the Assyrians. They are gone to this day. Nebuchadnezzar destroyed Jerusalem and sent them into exile in Babylon.  Modern day Israel is now a very secular society with only a few Orthodox followers of Judaism left, along with a strange Kabballah cult. Of course there are a lot of Jewish followers of Christ (Messianic believers) and that number is growing steadily!

For us today, let us not just be grateful our "crowns" are not of this world, but in a heavenly place, which we will one day cast at His Feet in honor!

Let us resolve to be the example to our boys especially in the way they should treat women - not as sex objects and notches on a belt - but as fellow heirs of the Kingdom who deserve Godly respect just as their mothers and sisters do....regardless of how some young women conduct themselves in this modern society.

Let us remember that we will one day give an account for our stewardship and that we would want that to go well, even though we are not as perfect as our heavenly Father!

Email ThisBlogThis!Share to TwitterShare to FacebookShare to Pinterest
Labels: absentee dad, examples, henry iv, honor, kings david and solomon as fathers, mail it in, respect, sex objects, stewardship, uneasy is the head that wears the crown