AM I A HYPOCRITE? 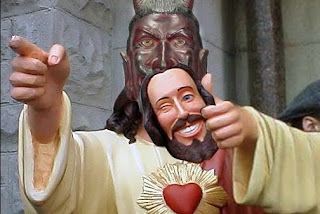 
We live in a world of pretend. Pretend cops on TV. Pretend millionaires. Pretend heroes in movies. Pretend wizards of smart on Wall Street. We have fake hair. Fake nails. Fake Rolex watches on NYC streets for $20. We drink fake sugar in soft drinks. We buy fake diet pills...fake...fake...fake...Almost everything is FAKE!

The culture elevates fake over real.
The culture bows down to people you won't even let into your living room, were it not for the fact they appeared in some movie.
The culture worships at the pagan altar of glitz and flashing man-made light, while ignoring the True Light of the World - Jesus Christ.
The culture uses Him as a swear and cuss word, all the while twisting His Words to fit their ungodly secular agenda....and the culture has crept both inside the church, and inside of us!

The reason why the church is dead, dead, dead....and therefore ineffective in both Canada and America is this - the culture;  and the secular world can't tell the difference between them and us!

The seeker-sensitive movement of the 1990's accelerated the slide by watering down the True Truth (as Francis Schaefer called it) so as to bring people by the numbers. Many followed this formula to the letter, and even removed crosses from their sanctuaries. They drew millions into their buildings....and what buildings they were!

They put up huge structures with multi-millions dollar mortgage debt. They put in high priced coffee and book shops and restaurants. The House of Prayer became First Corporation of Suburban USA Church, with multi-campus satellite feeds of the main preacher, who stays in one "main campus", while the sheep adores him on the jumbotron TV screen!

There is one deadly problem with all that MTV styled "worship" chock full of celebrity pastors and contemporary rock band stars on "christian" radio - IT IS BUILT ON SAND! Bill Hybels, who created the Seeker-sensitive movement that led many over the cliff, finally had to man up and admit in 2007 it was a complete failure. Hybels admitted they had failed to make Disciples of Christ. (By the way, Hybels never went back to Biblical standards to correct this error!)

Nowhere in the Bible, does it say to 'go become like your rich celebrity culture; remove the Cross of Christ; water down your bible translation to the Message; bring unintelligible hard rock music into your church platform; run up and down the aisle and call it prayer and worship the man supposedly representing behind His pulpit'!!!!

Instead you will find two things:
1. And He was saying to them all, "If anyone wishes to come after (or be a disciple) Me, he must deny himself, and take up his cross daily and follow Me" Luke 9:23 NASB.
2."Go therefore and make disciples of all the nations, baptizing them in the name of the Father and the Son and the Holy Spirit, teaching them to observe all that I commanded you; and lo, I am with you always, even to the end of the age” Matthew 28:19-20 NASB.

The modern church has failed on both counts! The Persecuted underground church in China has the most Christians in the world - over 300 million real ones. If anyone wishes to know why - it is because it is set apart from its culture...and not just that...it faces daily death for the Cross, by following Christ completely in an evil, godless Communist regime.

Look at the picture above. It is "fake Jesus". If we really search our own hearts, we will find some of that in all of us.  One line always struck me from the movie ELMER GANTRY starring Burt Lancaster. This movie is about a charismatic charlatan drunk Gantry who sure could preach up a storm, and charm his way into the hearts of many. But at the end of the movie, when the rubber hit the road, he walked away from Christ and said "When I was a child, I talked like a child, I thought like a child, I reasoned like a child. When I became a man, I put childish ways behind me". Elmer Gantry did not mean it as Paul did in 1 Corinthians 13:11. He meant it as his true core belief as he walked away and walked straight into an eternity, separated from Heaven.

Search your hearts right now....in the Name of Jesus. Are you plastic banana, good-time rock and roll fake Jesus with a godly smile....or are you a true disciple of Christ?

Father in the Name and Power of Jesus, I ask You to reach down inside of me and let Your Spirit search all of me to see what is left of me which belongs to the world. Lord, I do not want to be like them, even while living temporarily alongside them. Lord, let me be always mindful of the fact that this world is not my home, I am just a-passing through.

My citizenship is not in this land, but the GloryLand.
My calling is not from central casting, but the Cross of Christ.
My commitment is to Jesus and Him alone.
My commission is therefore to tell the Truth and reach others in Love!

Let me remember that You are light and there is NO darkness in You.
Let me therefore have NO fellowship with the fake light of this world which hides their dark intent.
Let me also never lie to others and myself by walking in the light of the culture when I should live in the Life of the Cross.
Let me fellowship with the saints of the Living God, who are like-minded and not the lost and dying...even if they populate churches by the millions across this land.
Let me not follow the lies of popular TV preachers who say we have no sin and are deceiving millions, into believing if we just think and act positive, we too can have all the material wealth - houses and cars and no bills - because "this is the best life now". Lord, anyone who believes that, the Truth is not in them and they bring judgment unto themselves!
Let me be honest with myself, and know I am a sinner saved by Grace and as I repent and seek forgiveness, Jesus Christ is faithful and just to cleanse, purify, remove and forget all of these sins as long as I don't keep doing them over and over and over again!

So Lord, let the Word reveal who I really am, so that I will not appear to be a hypocrite to those around me. Let me be aware daily of my commitment to walk in Truth and Light because this is way Christ would want me to. Let my talk match up with my walk and when I drift and tend to think about or dwell on the passing pleasures of sin for season, above the Timeless Glory and Joy of Jesus, pull me back into line, love and discipline me that I may remain worthy of Your calling to me, as one of Your adopted children for eternity, in the Mighty Name of Jesus, amen and amen!

Wow. I go to Willow Creek and have never heard Bill Hybels say the seeker movement was a complete failure. Reaching those far from God a failure? Really? What he did say was they were missing the mark/failing to turn people into devoted followers of Christ. There's a difference and it certainly should be addressed. To say he has never changed is completely false. Listen to any of the messages online or come to a service. There is deep biblical teaching both at midweek services and on weekends. People are taking responsibility for their own spiritual growth--isn't that part of the process? Spiritual growth doesn't come from continual spoon feeding, but from moving from spoon feeding to self-feeding. That is happening at least at Willow.

Thank you for the comment about Willowcreek, Anonymous! Thanks for taking the time. I know we have a lot of our local churches here in Springfield (Il) who are part of your association. Some are active, others are not. I know most of them, as the president of the main men's ministry organization in Springfield/Decatur. I take you at your word. One thing I don't get is Mr Hybels' fascination with Brian MacLaren and the Emerging Church. Most of us consider those people outside the True Truth of the Gospel and with good cause - from Maclaren's own mouth. I am not a heretic hunter, (I am a charismatic reformer like Whitefield and others)...but I know what the Emerging people are about and want no part of it or them. Not even discussion or fellowship, period.
God bless...
I don't deny good things came out of Willowcreek - Lee Strobel, Mike Breaux...among others.