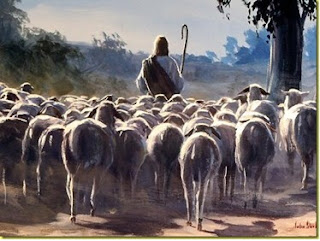 THE LORD IS MY SHEPHERD!
Back in the old west., there were all out wars between cattle ranchers and the humble sheep farmers! Many a gun battle broke out between the two as the cattle guys resented the smell and (in their mind) lowly status of sheep. On the other hand, the sheep herders resented the cattle guys for having their cows graze all the way down to the dirt...then move on, leaving nothing for the sheep to eat. Some of this slowed down around the Civil War when wool was needed for uniforms! All of a sudden, sheep was in demand, not for meat but for its wool!

Throughout bible history, sheep are mentioned over 500 times. This is more than any other animal and while sheep-herding described an occupation or way of life, for the most part, sheep represents God's people! The first known shepherd in the bible was Abel, who had lots of flocks, before his brother Cain killed him in a fit of jealousy.  Sheep made Abraham a very wealthy man, who shepherded a new race of people from Ur to wherever God sent him!

The best known was King David, the little shepherd boy who was rescued from the fields by the Lord your God and made famous. David used his amazing strength which he demonstrated, by way of defending his flocks to kill a lion and a bear with his bare hands. Yet it was this mighty man who wrote in loving humility - the LORD IS MY SHEPHERD (psalm 23:1)!!!

How about that?! What love and surrender to the Holy One Who not only created him, but the One Who defended, guided and protected him through it all! Scripture says "All we like sheep have gone astray; we have turned every one to his own way; and the LORD hath laid on him the iniquity of us all" (Isaiah 53:6).

So we are sheep. We are sheep in need of a shepherd.

When the angels of God announced His birth in the fields of Bethlehem, they went not to the religious but to the dirty shepherds who were looking after their flocks of sheep. They were establishing the paradigm of the Shepherd and Christ as the Head Shepherd of His people who are always in need of His guidance and keeping within the fold.

Yes, Jehovah-Rohi, the Lord is my Shepherd, as He was/is David's. In short, sheep are important in the course of human history - as a means of providing clothing (as we see for strong uniforms) or as food and objects of sacrifice at the Temple of God in Jerusalem, a long time ago. God has ordained it that we looked to our great Shepherd for EVERYTHING. We can write long books about the nature of sheep or the attributes of shepherds, but suffice it to say, let's remember one thing - Jesus is the Good Shepherd....and we would be lost in the thicket or in a ditch somewhere, if He does not rescue us and take care of us when we stray off the path the Lord has set for us.

Father in the Name of Jesus, I come to You right now, saying and believing as David did that JEHOVAH-ROHI - the Lord is MY Shepherd. Father, throughout the course of History, sheep have reputations of being just a dumb animal who would go along with the crowd and then get off lost somewhere.

Lord that described me perfectly! I was so dumb and blind I lived in and wallowed in my own sin for so long, until Your Son, the Good Shepherd, came and pulled me out of the ditch or pit I fell into when I strayed away from You.

Lord I am not ashamed to admit that I am one of YOUR sheep and would have it no other way. I admit I am weak, not too smart and used to follow the crowd. But with You, Jehovah- Rohi, I am strong. With You, I am super-sheep in Spirit and in Truth. With You, I can do all things through the Shepherd Who strengthens me. I thank You for that, Heavenly Father.

Thank You for adopting me into Your Flock and I long for and anticipate that day, when I see the Lamb Who sits on the Throne and gave it all for me, that I can become just that - one of Your sheep! I gladly follow You into eternity, my Great God, King, Shepherd and Master, in Jesus' Holy and Mighty Name, amen!