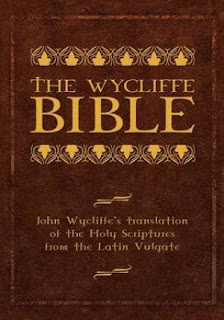 WYCLIFFE BIBLE TRANSLATORS CHANGING THE WORD OF GOD?
What is it with western Christian people and organizations, that at the first potential or real criticism from unbelievers, we dilute and corrupt the Pure Gospel of Christ? We even have well-known American Evangelical leaders and pastors calling each other racists and judgmental over the Doctrines of Grace and it is completely annoying!

Time after time, it is always the seemingly born-again, traditional organization or people who bend here, twist there and compromise other there. There is a new blow-up now in the Christian world out of something called the ELEPHANT ROOM, which an unlikely source birthed, for absolutely no reason. This will be discussed later in the coming week.

Of more concern, is the incredibly foolish move by the world's premier Bible translators - WYCLIFFE - which is currently working on translating the Bible into 1500 different languages to reach the remaining 340 million of earth's population, who do not have the Word in their own language.

Just as they were making progress into the moslem world and about to present a translation for those in Turkey, the Wycliffe people dropped the ball BIG TIME! In violation of a direct order from the LORD Himself, the latest offender of the Holy Spirit is unfortunately the WYCLIFFE Bible Translators!

Here is what the Lord Jesus said " I warn everyone who hears the words of the prophecy of this book: if anyone adds to them, God will add to him the plagues described in this book, and if anyone takes away from the words of the book of this prophecy, God will take away his share in the tree of life and in the holy city, which are described in this book. (Revelation 22:18-19 ESV)

This clear Biblically High Standard of transmitting the very Word of God is NOT to be violated. We have already had big controversies because of incorrect interpretations by both the Message and Living Bible paraphrases and the New International Version (NIV) mainstream version! Now comes Wycliffe trying not to offend followers of Islam! In both the online and book form of the Turkish translation released last August 2011, we now see a report in the past week or two, which is heating up big time!

In a slap at the Name and Essence of God, which we ourselves prayed through the month of January, Wycliffe changed the words SON OF GOD, MESSIAH and even God the Father to politically correct terms! If there ever was seeker-sensitive stupidity, it is this one! How dare these people bow down and compromise Jesus to these other people?!! Not just that, but they use the word Allah to describe God the Father, which is not theologically correct!

Reports state "In the Turkish (Book) of Matthew, the “alternative form” for “Son of God” is something along the lines of“representative of God,” according to Turkish speakers, and “God the Father” has become “great protector.” A footnote explains the alternate terms: “According to the Jews, ‘God’s Son’ means ‘God’s beloved ruler’ and is equivalent with the title ‘Messiah.’” (Online Source) .

This compromise with the world is so horrible that even the Pakistan Bible Society - which is under daily persecution of violence and evil against Christians - disassociated from Wycliffe!! These brethren in Pakistan know what it is to live under Islam. They are not dying and losing their homes and freedoms for the LORD JESUS CHRIST, only to see western translations dilute His Word to please their persecutors.

And this gospel of the kingdom will be proclaimed throughout the whole world as a testimony to all nations, and then the end will come. (Matthew 24:14 ESV)

The devil knows his time is short because of the statement by Jesus above, from Matthew! Therefore, he is pulling out all the stops to prevent the Word of God from reaching every tribe and tongue! The devil knows once this happens Jesus will split the Eastern sky and the gig is up - for good! We have personal knowledge of Wycliffe, whose funds to finance all these free bibles and translation endeavors, come from ordinary people in towns all over America, like your family and mine! This has already hurt Wycliffe's credibility and fundraising, just as the year begins for their drives! You see how this evil works, once the people of God compromise with the world?!!

The backlash and blowback have been so furious that in the past few days, the Wycliffe people seemed to have backed off and reaffirmed their commitment to translate the accurate words for Jesus - Son of God and more. Due to online petitions and loud complaints from biblically sound leaders...as well as a sudden drop in fundraising (!!!), Wycliffe has also said they will investigate all their translating people and groups to see how their "methodology" matches up.


This sounds like complete blaming some other guy, passing the buck, which holding on to the same error! PLUS, the incorrect book with the error leaving out SON OF GOD etc IS STILL IN CIRCULATION in Turkey! If Wycliffe is serious, they would pull those copies off bookshelves NOW!

The best thing to do is to keep up on this and get them to either leave to others (for translation) it to real Christians to translate, or repent publicly and go back to literal translations into the local languages and dialects! Nothing short of this will qualify.

These things are important. Therefore if you wish to look into signing the main online petition to Wycliffe to stay true to God's Word, here is the link:
http://www.change.org/petitions/lost-in-translation-keep-father-son-in-the-bible

Father in the Name of Jesus, I thank You for Your Holy and Precious Word! Lord You gave us this Word which was written over 1500 years by over 40 different authors...and which all tell the same story - the Wonderful News and Truth about the Only Son of God - the Lord Jesus Christ!

Thank You for confirming that rich and awesome and precious Word in my heart. Thank You for the Word that became Flesh and dwelt among us and Who is coming again as John said in Revelation 19 and His Name is the Word of God!

Lord, men and women in the pursuit of compromise, accommodation and political correctness some,  have violated Revelation 22:18-19 and thereby temporarily halted the spread of the Gospel to the last unreached people group on earth! Lord, put an end to that so that WE may live in Spirit and Truth and worship the Father as He demands and seeks and loves!

Our prayer book, the Psalms said in Psalm 119: 89-91a  Forever, O LORD, Your word is settled in heaven. 90 Your faithfulness continues throughoutall generations ; You established the earth, and it stands. 91 They stand this day according to Your ordinances...so LORD May Your True Truth continue to move forward and reach many, until the End comes and Your Son, Oh God, takes His rightful place on the Throne in Jerusalem, in the Name of Jesus! Amen!

Email ThisBlogThis!Share to TwitterShare to FacebookShare to Pinterest
Labels: I pray for those who pray up an dna flash technology., wycliffe direct of work and time, you father