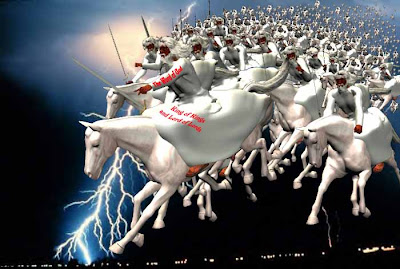 
It happened once before when a man calling himself GOD MANIFEST, went into God's House and sacrificed an unclean animal (a pig) to a pagan god named Zeus. Exactly 2300 days to the day which God gave Daniel a prophesy to write (Daniel 8),  this abomination was settled.


In 168 BC, Antiochus Ephiphanes (God Manifest in English) did this evil which Daniel called "the abomination of that brings desolation". (As a side note, we have the celebration of Hanukkah because of the miracle of God giving Judah Maccabee, who led the Jewish rebellion against the pagan Greeks. The Maccabees cleansed and rededicated the Temple to the Real God of Heaven after driving the enemy out in 165 BC).


Jesus will later predict a time when this will be repeated in Jerusalem. The soon to be revealed anti-Christ will set himself up in the not -yet- built Third Temple in Jerusalem. As we speak right now, plans are almost complete by the reformulated Jewish Sanhedrin and Orthodox believers of the Torah only, to rebuild this Temple! I will explain in an article later this week.


This anti-Christ will be the real deal, not some Greek madman king like Antiochus! When he sits in the Temple in Jerusalem - the home of Jesus' Future 1000 year Reign, declares himself to be God and then sacrifices another pig on the altar, this will lead to Jesus getting off the Throne in Heaven and all hell breaking loose against the devil and all his minions running the world today! This is WRITTEN and is going to happen!

Not only will Jesus, the Lord and Commander in Chief of Heaven's Armies have had enough, but those who are alive in America and worldwide today, and do not own Him as Lord and Savior of their lives, will witness first hand their presidents, congresses, parliaments, prime ministers, media, governors, mayors, school superintendents and on and on....completely under the hard immediate judgment of Jesus. It is NOT going to be pretty. I don't have to tell you what it means. Read the Book of Revelation and doubt it at your own peril!


When Jesus dispatches with those people who populate the United Nations and all the halls of Power from Washington DC to London to Brussels to Saudi Arabia to Beijing to Perth  and Peru, the Second Cleansing of Jerusalem will begin. This time, the Oil will last more than the eight (8) days of Hanukkah! The Eternal Light of Christ will be among us for 1000 years as we come back to reign with him, in a world cleansed of all those who were not only acknowledged haters of Christ, but those by people  who called themselves "men and women of God"* (Christians and Catholics).

Just a word of encouragement here - this should stir us to PERSEVERE as real Christians. If we are truly His and have been cleansed now by the Blood of The Lamb and are saved, sanctified in the Holy Ghost, we have nothing to worry about then the Terrible Day of the Lord begins against the enemies of Christ, whom we see on TV, right now! Nothing! Let not your hearts be troubled, men and women of God!!


My other friends, do not wait to see if all these prophesies and talk of third temples etc are really true. Do not buy the lie of the devil and his world. Do not even buy the false arguments of certain well known preachers who have the best teeth and Pepsodent smiles in Houston or California, and tell you nothing of the nature of sin which leads to repentance and restoration!!!! Do not wait, do not linger!!!!


Make your peace right now with God. You have less time than you think. Today there are abominations which have made financially and morally bankrupt nations like America, a foul odor in the Nostrils of Our Holy God in heaven. We have people calling themselves Christians and Catholics who condone Abortion and Gay Marriage and allow the Corruption of our kids' minds by the Culture, yet quote "The Sermon on the Mount" as their  guiding light to control other humans' lives, in their thirst for power.


Right now, like Antiochus, these people have only the power God has allowed them to have, but the Greater Light is watching as His enemies store up wrath against themselves. As the nation becomes more messed up...as more and more church-goers think they can believe in both evolution and the God of the Bible...as more and more pew-sitters think it is okay for two people to shack up, no matter how young or whatever gender they are....as more and more believe a lie from the pulpit as weak men "preach"....the harsher the coming desolation will be for them. DO NOT BE CAUGHT WITH THOSE WHO BOUGHT THIS PIG IN A POKE!


Father in the Name of Jesus, I surrender all to You right now. Lord I know nothing else except one thing - YOU ARE GOD, I AM NOT AND I LONG TO BE WITH YOU, ONE DAY IN PERSON AS I AM RIGHT NOW IN SPIRIT. Thank You for saving me, for bringing me out of darkness and giving me a destination of the Kingdom of Light.


Thank You for giving me a spirit of discernment that I can read the times and see not just how evil they are but now how I must warn others and bring others to You, to a saving knowledge of Christ, starting in my own family, before it is too late.


Thank You for giving me a spirit of  wisdom that I can read the stitches on the fastball of lies, coming at us fast and furious daily, which those who call themselves "christians", who are actually happily doing the work of the devil, who was is and will always be a liar, keep throwing at your people.


Thank You for giving me the eyes to see the coming Day, as hour by hour, we see abominations from abortion to those who condone gay marriage and immoral "shacking up" instead of the Holy Institution of marriage You set up for all society in Genesis 2:24....we see these evil things Lord, but not just that, but we see new age cults and philosophies of man, which sell more than than books and songs and movies that celebrate You. We see those in power telling churches they have to supply life-ending pills free to others, and calling that contraception. We see cultural rut-gut on TV drawing in even Your people, like a spider's web, until they see nothing wrong with it...and worse, we see Your under-shepherds, called pastors, say and do nothing about it.


God, give women and men like us, who are in the marketplace daily, the boldness and courage to stand up for Jesus right now, so we may rest on that Day, when You make take out and permanently remove those who are lined up right now against You in this world. Give us a measure of love to love many to You, in the way which You will approve and to show the Grace, great Mercy and Compassion which describe You as the God of Love.


Give us not just our daily bread, but enough to share with those who are hungry. You have already given us the Bread of Life - the Lord Jesus and I can never thank You enough for that! That is the Bread I will talk and sing and praise of all the days of my life, until I see Him Face to face, here there or in the Air, in Jesus' Holy and Mighty Name, amen and amen!