ARE YOU TOM BRADY OR APOSTLE PAUL? 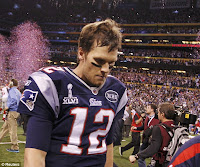 This just-concluded Super Bowl 46 game between the New England Patriots and the upstart New York Giants was the most captivating for its worldwide audience, than most!

What stood out, to me,  was how one man handled adversity and another lived. NY Giants quarterback Eli Manning, the latest of the successful Manning football clan, had become well-known for last minute comeback wins. This most exciting of Super Bowls was no different, as it went down to the last second! The super-rich and seemingly unbeatable Patriots quarterback Tom Brady was a different story.

Brady is a man who has everything: from three Super Bowl rings to a new $20 million dollar mansion outside Hollywood to a famous international supermodel wife. In Boston, he has almost the divine right of kings and treated as local royalty. So it was, after leading in the game, for most of it, after a rough start, Tom Brady soon got in a dazed and confused state. He was suddenly watching a team with no outstanding celebrity being led by a good old boy from Mississippi, who lives in the deep south as a regular guy in the off season!

Because of his superior talents, this man, Tom Brady, expected to win and win big. However, because football was his god, when things went south towards the end of his pending loss, Brady got in a surreal funk. This has also led his celebrity wife into a controversy of her own, when she used four letter words to blast Brady's fellow team members for costing her husband the game by dropping catches. The media seemed captivated by a beaten man, who could not even speak, as this loss shook him to the core.

None of these sports teams - from the Giants to the Patriots or even last year's baseball World Series winners St. Louis Cardinals - could be classified as full of born again Christians. In fact when they win, not one of them give credit to the Holy God Who gave them their gifts. But what is evident is that these teams are full of men who are narcissists and so full of themselves that they think themselves to be godlike.

Jesus said in Mark 8:36 NLT "And what do you benefit if you gain the whole world but lose your own soul?" We have people here who, while possessing every worldly benefit and all the riches they desire, are unhappy to the core, because their joy and happiness is completely dependent on WHAT they do. The object of their happiness is their opinion of themselves. The core of their being is defined by how many trophies and wins they have over the other guy. They define winning by, well, winning this thing at all costs.

Because they have no core set of true beliefs....because their lives are not enriched by the knowledge of the wonder of the eternal God of Heaven....because their sins are not washed away by surrendering to the Blood of the Lamb of God, when it all goes south, they are devastated.

The Apostle Paul was the Tom Brady of the great Religious order of the day. He was on a path to be high priest of Jerusalem one day. But God had another plan. He took this man, then called Saul, knocked him off his high horse, just like Brady was,  and humbled him to the point of blindness. Saul came to realize not just how spiritually blind he was, but how much he saw once he looked a life through the very Eyes of Christ! When God changed Saul's name to Paul, He gave him a new heart of flesh and hope in his heart which he carried through the end.

Nobody was persecuted, beaten and almost killed many times before his actual beheading in Rome, than the Apostle Paul. Yet he kept his eyes on the real prize - the Prize of Christ. Paul was the opposite of Tom Brady. How many men would have the following last words as they face execution for winning millions of souls to Christ from then until, now, with his writings. Here, we see Paul's final words  "For I am already being poured out as a drink offering, and the time of my departure has come. I have fought the good fight, I have finished the race, I have kept the faith. Henceforth there is laid up for me the crown of righteousness, which the Lord, the righteous judge, will award to me on that Day, and not only to me but also to all who have loved his appearing.(2 Timothy 4:6-8 ESV)

Now, the choice is before us, folks - do we chase after the world and its games, its fame and its disappointments or do we empty ourselves of ourselves then run the marathon of life well, while keeping our focus on Christ - the Author and Perfecter of our Faith???!!! Do we place our entire hope and faith in some team members catching our passes or sacking the other guy's quarterback, or do we fight the daily fight of Faith, knowing our Great God has already fought and won for us at the Cross, and all WE have to do is get to the finish line, completely in His Will, knowing our real Crown and Trophy is life in the Eternal Kingdom of God???!!!

We know what the world chooses. The question is - what do you choose? Is your happiness and hope is in what do you, or is your hope built on nothing else, than Jesus' Blood and Righteousness...and who HE says you are?! The choice is yours, and yours alone!