THINK ON THESE THINGS - SUNDAY 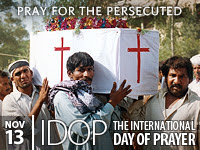 Most of us will never come face to face with a brother or sister in Christ, from another country, who faces regular and constant persecution by evil - day after day... month after month....year after year....decade after decade!


My good longtime friend and brother in Christ, "P" (not his real name, for obvious reasons) is such a man. Having known this man for about 5 years, am amazed not just at his resilience, but his faithfulness to the Lord Jesus Christ.

P comes from a family of Christians who have been adopted by a network of local churches in a military pagan Buddhist country not far from India. Persecution range from imprisonment, seizing of property, withholding Bibles, beatings, discrimination in employment and just plain brutality.


But he stands up to them, just as Stephen stood up to the Pharisees...or Peter right after Pentecost. The buddhists are always telling him he is bowing down to Americans, thinking they are insulting him. He then has the chance to tell them he is not bowing down to American Christians but to Christ, the Good News which American missionaries bring!


He then asks them, "where is the Good News of the buddha? Where is it?" Of course they can't answer that because there is not  a shred of Good News in either buddha, islam or any of the new earth/new age garbage promoted by Oprah by ungodly cultists like Eckhart Tolle, Rhonda Byrne, Deepak Chopra and other anti-Christian writers.


Still the persecution P and his people suffer, as harsh and brutal as it is, pales into comparison to what is done to Christians in deepest, darkest African with Christians stuffed into containers in Eritrea. Christians are murdered and their homes burned in Uganda, Nigeria and we all saw the Egyptian islamic regime run over and kill 37 Coptic Christians with tanks weeks ago. Over 1,000,000 Chaldean Christians were evicted from their more than 2000 year old home region when the islamists took over the Baghdad region of Iraq, after the United States removed Saddam Hussein. Jews and Christians are persecuted in Libya and Syria....in the name of the god of islam.


So today, when you pray to the Holy One of Israel - the LORD GOD ALMIGHTY is His Name, pray for your persecuted brother and sister around the world. If you don't, you will answer to Christ. When one part of the Body hurts, the rest hurts. American christians are mostly into navel-gazing and enjoying their plush comfort and Starbucks...and you can do that, but please spare one moment for those who share a Bible with 30 other people, while we have 10 collecting dusts on our book shelves at home.


Right now, P and other christian leaders in the Persecuted Church are in need of Bibles. Many in Asia and Africa have to share and swap pages! Yes, PAGES of the Bible! Our friend and a ministry we support called LOVE PACKAGES in Butler, Illinois, sends containers full of used and new Bibles worldwide and you can see the full story HERE on their Website. Same story - the need is Bibles.

Therefore, in the Name of Jesus, HERE ARE THE PRAYER POINTS FOR TODAY'S MISSION - AS WE PRAY FOR THE PERSECUTED CHURCH:


CHINA
Although the constitution provides for religious freedom, China's
Government has consistently tried to control religious practice. All religious
groups are required to register. Those who refuse are regarded as 'illegal' and
sometimes forced underground. During 2011, a number of churches and
Christians have continued to face intimidation, with some individuals being
detained and tortured.
Pray for
• Pastor Shi Enhao, vice-president of the Chinese House Church Alliance,
who was sentenced in July to two years of ‘re-education through labour’.
• Prominent Beijing human rights lawyer Gao
Zhisheng, who has not been seen since April 2010.
Gao has made public statements about his brutal
torture by security police in 2007 – despite being
warned by officials not to do so.
• Members of Shouwang Church, Beijing, who repeatedly held their
Sunday worship outdoors during 2011 after being barred entry to their
normal venue. Police officers then arrested hundreds of church members
and detained several leaders. It is believed that the church has attracted
official attention because its members include many well-educated
people, including human rights lawyers, former government officials and
religious scholars.


INDIA
Hindu nationalists have been open and violent in opposing the church.
Several pastors have been murdered, others beaten. Churches and their
congregations have been attacked or threatened. Seven Indian states have
now passed anti-conversion laws.

Pray for Christians living in Egypt and Libya. The ouster of the dictators of those countries and the takeover of power by fundamentalist Islamic forces have only increased the level of persecution of Christians living there.

Pray for peace in the Middle East. Pray that Palestine’s latest strategy to grab international attention by applying for full membership of the United Nations as a state does not lead to renewed tension in the already troubled region.

Pray against the spirit of superstition prevailing in India. A newspaper report said desperate women, under pressure to produce male heirs, in villages in Salem district of Tamil Nadu still resort to feticide based on astrological predictions. God detests sorcery and fortunetelling (2 Kings 21:6; Isaiah 2:6).

Pray against the prevalence of sex education classes around the world. In schools in Washington, US, even 10 year old children are made aware of the use of condoms in the name of sex education. Pray Christians remain united against this abhorrent phenomenon and fight it tooth and nail.

Pray for peace between the Jacobite Church and the Orthodox Church in Kerala. These churches have been at loggerheads over property disputes for over four decades now. Recently, both churches sparred and approached court seeking rights over a church in Kolenchery, Kerala.

Pray for Christians living in Algeria. The government continues its crackdown on churches and has issued orders for several to be closed down. Meanwhile, an Algerian Christian is facing a five-year prison sentence for alleged blasphemy.

Schools in the western countries are increasingly coming under the attack of groups that are intent on banning anything to do with Christianity beginning from prayers, mention of Jesus Christ and Bible lessons. Pray that Christian families stand up together and plead their cause effectively.

Pray for peace in Israel. The Hezbollah and the Hamas opposed to Jews are believed to have capabilities to launch bio/chemical and nuke attacks against Israel from Iran or Syria.

Pray that churches will come forward and form a bloc against corruption prevailing in the country. The Bible makes a case against giving and accepting bribes and corruption.

Continue to uphold Asia Bibi in your prayers. The Christian wife and mother who was convicted of blasphemy charges in Pakistan is on death row since November 2010. Last month, there were reports that she was assaulted inside jail.