HOW DO I THINK ON THESE THINGS.... 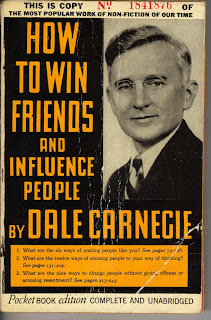 The best selling Business book of all time is "HOW TO WIN FRIENDS AND INFLUENCE PEOPLE" by the great self-help author and business trainer - DALE CARNEGIE. In terms of impact, while other books like "A Purpose-Driven Life" by Rick Warrren may have sold more (over 26 millions copies) per unit, Carnegie's book and philosophy has influenced more worldwide, due to its ongoing training institute.

Dale Carnegie's personal story is very instructive in doing the right thing (for himself) at the right time. Even his name change from Carnegey to Carnegie, was a stroke of marketing genius. At the time, famous US steel magnate Andrew Carnegie was as well-known as Donald Trump's is today.  Carnegie took the world by storm on the following principles, which formed the foundation of the best known course in the world:

His "How to Win Friends...etc" book was based on the following four pillars:

If you look at these items above, there seems to be nothing wrong with any of it. However, I am more interested in How Christ would measure up to any of these things. This is important because a person's relationship with the Lord Jesus is more significant than succeeding in the natural.

One major fault I find with this book and its successor - Norman Vincent Peale's "THE POWER OF POSITIVE THINKING" - is its complete dependence on Psychology. Peale even said " Positive Thinking is another term for Faith"!

While Peale's Guidepost Magazine is still a wild bestseller, it should not be confused with biblical Christian doctrine, as it sometimes includes stories of other religious Faiths.

Back to Carnegie, some of his philosophy stretched away from a Biblical worldview, which Christ was not about. His modern counterpart in the church would be Joel Osteen, who practices and preaches a combination of both Peale and Carnegie.

The Bible gives us the complete way to both Think and Act positively.  You can be the most successful businessman or woman by following both these men to the letter, but unless your foundation is Christ and the Word of God, what good does i profit to gain the world and lose your soul?

The first thing to ask here is not would Carnegie or Peale say, but what would Jesus do?!
Here are two examples of how Jesus Christ, Creator of the Universe contradicts one of his creations - Dale Carnegie:DALE CARNEGIE TEACHES  in Six Ways To Make People Like You:  Talk in terms of the other man’s interest.
JESUS CHRIST TEACHES: And he said unto them, How is it that you sought me? knew you not that I must be about my Father's business? (Luke 2:49)

DALE CARNEGIE TEACHES: in Twelve Ways To Win People To Your Way Of Thinking:  Show respect for the other man’s opinions.  Never tell a man he is wrong.

JESUS TOLD THE RICH YOUNG RULER WHO WANTED TO KNOW THE WAY TO ETERNAL LIFE:
LUKE 18:
[22] When Jesus heard this, he said to him, "You still lack one thing. Sell everything you have and give to the poor, and you will have treasure in heaven. Then come, follow me."[23] When he heard this, he became very sad, because he was a man of great wealth.
[24] Jesus looked at him and said, "How hard it is for the rich to enter the kingdom of God! [25] Indeed, it is easier for a camel to go through the eye of a needle than for a rich man to enter the kingdom of God.

Did Jesus appeal to the rich man's psyche and say " You know, dude, you're right. I will just forget the part about following Me. Just go ahead and make as much money and create more businesses and have all kinds of stock options as you want, and then when you feel ready, start coming to church and say My Name once in a while...except when you're using My Name as a cuss word!!"

Did Jesus say that? NO! He told the rich and powerful man that he was literally DEAD WRONG!

In the first counterpoint I listed, to Carnegie, Jesus said He was about His Father - Our Father in Heaven - Father God's Business!

Father's Business is the recognition of how our own sin has separated us from Him.

Father's Business is the realization of our total depraved nature of sin, sex and Satan and how we need to make a complete break from this or we will perish eternal.

Father's Business is the reassurance from His Word that this complete break from the Adamic Sinful Nature we were born with, is more than possible - it is a Gift.

Father's Business is the responsibility He took to repair the breach between Him and man after Adam blew it right from the beginning.

Father's Word -the Bible- blows any book by Carnegie, Peale and Osteen out of the water and none of them can measure up to any phrase in it.

Tomorrow, we look at what God says about Positive Thinking...and it is ALL FROM HIM...nothing from the flesh!!