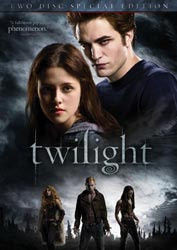 CONVULSIONS, STRANGE BEHAVIOR - IN AMERICA'S THEATERS - UP TO DATE INFO!

UPDATE (Dec 5): Following MORE documented cases of teens and some adults experiencing seizures and demonic convulsions at the Twilight move, AMC Theaters have put out a warning at all their Theaters nationwide. This warning states that about 90 minutes into the movie, a scene will occur, which can bring on this type of reaction.
So far, the Twilight movie distributor - Summit Entertainment - has kept silent as they rake in millions of dollars on other's misfortune.
More and more people are reporting from Maine, to Modesto and Canada as well as the UK, they got queasy and even vomited or fainted during the movie's grislier interludes!!! This is trending on Twitter!!! Also they confirmed these violent reactions, which OCCURRED DURING OTHER PARTS OF THE MOVIE, NOT JUST THE VIOLENT and satanic birth scene, had nothing to do with Epilepsy.
Still the church remains silent as many souls are lost to hell, because of this kind of movie!
Also on December 2, 2011, The US Epilepsy Foundation is using Facebook to warn its followers about a scene in the film Breaking Dawn linked to photosensitive seizures (Because of the particularly graphic scene with flashing white light). The Foundation says " The flashes – at the right frequency – can cause the brain to start firing in sync, a deviation from its normal chaos", on their FACEBOOK page.

Update (Nov 27): A young man passed out standing up at the Movie Theater after watching it and fell face down on the concrete floor!!!! From a pastor friend (Name withheld)

America has gone ape over the new TWILIGHT saga movie "BREAKING DAWN, Part 1"! It is the biggest selling movie all year in theaters across the country. Now comes word that a theater in Sacramento had to close down the theater after man told CBS 13 (which his wife confirmed) that he had convulsions. His wife said he was snorting like a pig!


Over in Utah, where the Twilight author Stephanie Meyer admitted that a "an angel of light" gave her the entire story and characters for Twilight, another man blacked out and HIS wife said he was making strange noises and flopping around! This couple as afraid to give their names to ABC TV in Salt Lake City, in case he loses his job!


Here is the account in part, from ABCNEWS.com "Brandon Gephart and Kelly Bauman had gone to see “Breaking Dawn: Part One” last Friday when Gephart began “convulsing, snorting, [and] trying to breathe,” according to Bauman. He doesn’t remember anything, he says, but soon awoke on the theater floor and was taken out by paramedics. The remainder of the screening was cancelled....


In Salt Lake City, the wife of the  unnamed couple said "“He started mumbling and he was blinking on and off with his eyes at that point.  I was kneeling in front of him slapping his face,” she said.

The couple said that they left early, and when they returned the next day they heard that it had happened to another girl watching the film too, though the manager of the multiplex where they viewed “Breaking Dawn” said he doesn’t know of that instance (ABCNEWS.com)
Folks, these brainiacs went back to the movie!
The fact that this demonic-inspired phenom is so popular in America's schools, homes and sadly, some churches, shows how easy it will be for the antichrist to take over the whole, once he - the man of sin - is revealed, according to 2 Thessalonians 1.
This is a warning to all Youth and/or church leaders, you will be held responsible by God, for not only taking kids to see this evil filth, but for not warning them about God's Wrath against witchcraft, divinations, sorcery, mediums and yes: so-called "vampires"! You, Mr. and Mrs. Church leader kept quiet when Harry Potter, written by a wiccan witch J K Rowling, spread throughout your church members. Don't make the same mistake twice.
We, who are walking with the Lord and know His Holiness is perfect, need to warn our people that God will not put up with people who indulge in this and then try to come before Him. He will cast them far away from Him, for eternity!!!

THIS WARNING FROM GOD HAS NEVER CHANGED:

“When you come into the land which the LORD your God is giving you, you shall not learn to follow the abominations of those nations. There shall not be found among you anyone who makes his son or his daughter pass through the fire [an ancient occult practice], or one who practices witchcraft, or asoothsayer, or one who interprets omens, or a sorcerer, or one who conjures spells, or a medium, or a spiritist, or one who calls up the dead. For all who do these things are an abomination [detestable] to the LORD…”   —Deuteronomy 18:9-12a
THIS IS A GOOD RESOURCE EXPLAINING BOTH TWILIGHT AND HARRY POTTER
CLICK HERE

It's clear that these people were having siezures. It's sad when people are misleading like yourself and the bible says he will judge those. I'm not saying that the movie is Godly but to lie about the results of this movie is wrong. I pray for you and what you have said.

To Anonymous ... it is well known that types of flickering light and manipulated images will cause some to have convulsions. I gave such a lecture to a freshman sociology class at Syracuse University back in 1971, pointing out how they are used deliberately for cause. However, I wish you had the sense of responsibility to use your own name so I could lift you up in prayer before the throne of grace, because if you do not believe in the reality of demons in this world, or their ability to use such as I described to cause problems, you have other deep-seated problems which only a renewed relationship with Jesus Christ can solve. May God draw you to Him.