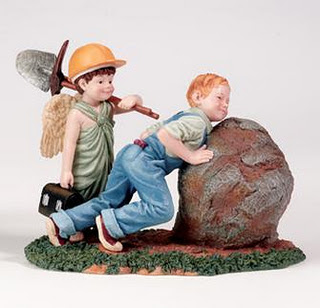 WORD OF THE DAY - PERSEVERANCE

Put in modern language, this word comes from the LATIN (Like most English words) and means "hang in there" or to continue on; stick to it and well, persist. It implies specifically to NEVER give up.

A couple months ago, on this very blog if you searched, you will find a thorough examination of Hebrews chapter 11, which lists by name, all the major Bible heroes who persevered through trials, temptations and evil, to the end! These names range from Abraham and Moses to Rahab and more!

America was built by people who refused to give up. Charles Goodyear, the tire man, never gave up until he found way to make rubber flexible, even though he and his family were hungry and cold from poverty, back in the early part of the 19th century.

Elias Howe patented the Sewing Machine in 1846, but do you think he just invented it and it worked right away?!


Milton Hershey, one of the heroes I wrote about in my book DANGER ZONE, whose name is an American Chocolate staple, tried and failed so many times.

I could go into detail on these and more....and did on the Bible heroes, but we get the picture.

All of us - young and old - are called to never give up.

Things are horrible for our young people as most teens and college graduates cannot find jobs - never give up.

They see no point to life and its many hardships - never give up.

They see their parents struggling in some cases, even bible believing parents, but they should - never give up.

Wives are seeing husbands laid off, through no fault of their own but - never give up.

Widows are alone and sad and feeling the emptiness of loneliness  but - never give up.

Never give up, never give up...our Jesus never, never gave up on us. If He did, we would be toast! God has spent the last 6000 years graciously trying to offer His Hand to man to pull us out of our self-made quicksand, when He could have justly given us what we deserved!

I offered you His exhortation to hang in there, this morning, no matter what you're going through. I also wish to start off by asking first of all, as our focus has been on prayer, to persist and persevere in PRAYER this weekend!

Perseverance through Prayer is probably the most beneficial to the Christian believer because it shows we trust and depend and rely fully on God, through Christ, and Him alone! AMEN

More than that, we rejoice in our sufferings, knowing that sufferingproduces endurance, and endurance produces character, and character produces hope,

James 1:2-3: Perseverance in Trials
Count it all joy, my brothers, when you meet trials of various kinds, for you know that the testing of your faith produces steadfastness


James 5:1: Perseverance with Job as the Example


Behold, we consider those blessed who remained steadfast. You have heard of the steadfastness of Job, and you have seen the purpose of the Lord, how the Lord is compassionate and merciful.

1 Timothy 4:16 Perseverance and Persistence
Keep a close watch on yourself and on the teaching. Persist in this, for by so doing you will save both yourself and your hearers.

Email ThisBlogThis!Share to TwitterShare to FacebookShare to Pinterest
Labels: hang in there, James 1:2-3, Job, never give up, perseverance, persist, prayer, Romans 5: 1-5, stick with it, struggle, suffering, trials, tribulations, win

Thanks, Bernie, for the encouragement to continue on, no matter what! Bless you!

THANK YOU, LYNN!!! It's an honor to have a visit by you and for the kind word here! Thank you and stay well! have most blessed day in Christ tomorrow, sister!
Amen.