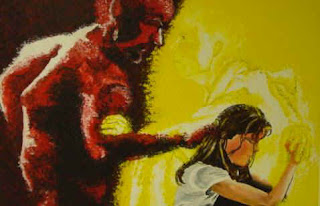 THE ORG. CHART FROM HELL!
The late Pastor E.V. Hill used to say “if the devil ain’t bothering you, you ain’t bothering him!”
OUR VERSE TODAY:
For we wrestle not against flesh and blood, but against principalities, against powers, against the rulers of the darkness of this world, against spiritual wickedness in high places…..Ephesians 6:12 KJV.
The devil is real, as we said, but he is also NOT Omnipresent like God! He wanted to be and this is how he fell, from the head angel to the pit of hell.  Therefore, because he is not God, he cannot be everywhere. Therefore, after 6000 years of trouble making, he has used the 1/3 of the angels who sided with him against Holy God to enlarge a demonic structure, on earth, which boggles the mind.

We are warned about this in the Bible. Yet the weak modern church plays ostrich! Tomorrow, I will talk about the WRESTLING against this Hierarchy from Hell. For now, here is IN ORDER, what God warns us about:
- Principalities (These are the main "hell's angels" The original word is "ARCHE" where we get the word arch and which also means "beginning". These demons were the arch enemies of the Living God, from the Beginning!!! God is telling us where these things came from...do not despise Truth!)
- Powers (now this is the same word for "authority" used in John 1:12 where God says Jesus delegated some of His Authority to "those whom He called as sons". Just as our Savior Christ the King authorized us to do His work.....the ANTICHRIST has delegated his evil deeds to his 2nd in command!)
- Rulers (the original word is "kosmokrator" ...referring to those who influence and control the lives of those who are completely walking in the flesh and this world. This applies not just to those who influence evil men like Hitler and Gaddafi, but anyone who breaks up marriages, leads children astray or destroys lives down the street!)
- Darkness of this World (...or "skotos" this "aion". This refers to the physical and moral degeneration of not just this age but the future slide into Sodom and Gomorrah of all mankind, before God puts an end to this nonsense for Good!!)
- Spiritual Wickedness (these words are derived from "pneuma" or 'spirit' and "poneria". It connotes a spiritual flood of evil, so vile and stomach-churning, it will cause literal pain and harm to those who are its victims!! Still believe there is no devil??!!)
- In High Places (or "epouraniois" meaning...all of the above combined have an impact which was intended by its ruler, who inhabits a sphere not of this world).
If we had supernatural eyes, we would be able to see all of this demonic activity! But if you're walking in the Light of Christ, you can also be like Elisha, who asked God to show Israel's enemies, what they really faced....and God showed them CHARIOTS OF FIRE!
So while we are up against an organizational structure of satanic evil, GREATER IS HE WHO IS IN US, THAN HE WHO IS IN THE WORLD!! AMEN!!
TOMORROW - THE WRESTLING FEDERATION & HOW TO WIN THE ROYAL RUMBLE
Image by Google Images

Thanks Lynn! You're so kind!! Appreciate your comment very much! This is some serious stuff which the church is ignoring big time....or giving brief attention to!