THINK ON THESE THINGS - THURSDAY 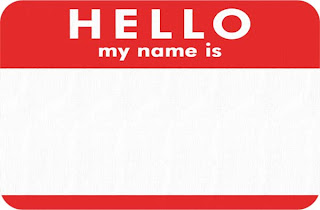 WHAT'S IN A NAME,  PART 1
William Shakespeare wrote "What's in a name? That which we call a rose by another name, would smell as sweet!" (from Romeo and Juliet).
Webster's dictionary says that a name is "a word or phrase that constitutes the distinctive designation of a person or thing" or "a word or symbol used in logic to designate an entity".
If a cop tells you "Stop IN THE NAME OF the Law". You stop because there is authority attached to this command. The same thing applies if a person PRAYS IN THE NAME OF JESUS. Two things are involved - Jesus told us to and "by reason" of asking in THAT NAME, we have "exousia" authority to execute the prayer.
So the word "NAME" carries more than a punch for a simple four lettered word! There is a Name Which has caused heathens to fear, hell to tremble and hatred to abound for almost 2000 years and this NAME IS JESUS!
What's the NAME? - JESUS!!!!!
Why is the Name of Jesus both feared and hated by those in the secular world, and their deceived brethren inside Christianity? (Notice I did not say Christians!)
Why? It makes no sense to those of us who have been saved, sanctified and brought into the kingdom of Heaven by Jesus Himself!
Why do they not love my Jesus?!
Why do they profess to believe in and almost love God, but hate Jesus?
Let us face it, if you are not for Jesus, you are against Him. There are people who would celebrate the baby Jesus at Christmas and sing all the Christmas songs, but not give another thought to Him on December 26...until Easter, where Jesus becomes an Easter Bunny to them!
I am here to tell those people, my Jesus is NOT a baby anymore - that was one moment in time for one completed assigned task....and my Jesus is not an Easter Egg Carrying imaginary, overgrown, large-earred Easter Bunny.
King Jesus is the living,breathing Holy Son of God. He is the God of Creation and the First of All Eternity. He is the Alpha and Omega and the Judge of all. He is the Savior of mankind.....what's in The Name, well...join in here the next four days or so!! Amen!!
COMING UP IN THE NEXT FOUR DAYS:
PART 2 - TREMBLE AT THE NAME
PART 3 - PRAY THE NAME
PART 4 -  GLORY TO HIS NAME (Sunday Message).