THE FIRST COMMANDMENT
(First of a Series on the Ten Commandments)
Exodus 20:3 (NASB): 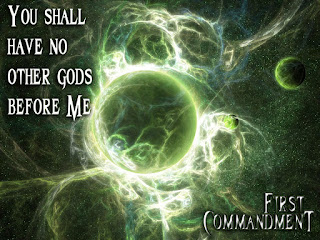 Part 1:
This world is full of false gods - the idols which men and women have made unto themselves because it is easier to so do, in their rebellion.  It has been like this during the entire history of man, after the fall of Adam and Eve in the LITERAL Garden of Eden. But in this amplified hi-tech world of the 21st century, we see it reaching Sodom and Gomorrah proportions.

The pagan idols and gods are not just the demonic of the eastern and other religions with their shamans. Those are obvious to the discerning Christian. What is increasingly disturbing are the millions caught up in the spiral into the pit of Santeria and other blending of the demonic and Catholicism. Most of these people live in places like Cuba, Puerto Rico, Brazil, Venezuela etc. Through the elite and immigration, the practice has spread to Florida and other parts of cosmopolitan USA.

When you add the increasing acceptance of Yoga into the mainstream, we see the infiltration into the last bastion of Christianity in the west - the declining Evangelical church of America. Church leaders are allowing "Christian Yoga" into God's church, claiming they are not doing the accompanying hindu chants, but are just worshipping our God through exercise....by the way our God Himself said "Can a make take fire into his bosom and not be burned?" ....just saying!

Adonai was very specific here. He is representative of the Father of the Universe - Jehovah God - Abba! There is to be NO OTHER WORSHIP of these false dieties and for the Christian who thinks he/she is being tolerant and "loving all peoples" by bowing down to this....then going to church on Sunday, there is going to be a bill come due one day!

This has manifested itself in the Barna polls. They now reveal that 57% of so-called evangelical christians say that there are other ways to heaven than Jesus Christ, the Lord and Savior! These non-believers are the fifth column in our churches! When the tribulation comes, they would be the ones used to persecute real believers.  We see them all over the media now....having interfaith meetings; promoting pro-abortion candidates and seeing nothing wrong with alternate lifestyles equating itself with Biblical Values and Biblical marriage. In addition to these obvious violations against Holy God, we see a watering down of the True Gospel of Christ and more emphasis on entertainment and psychology, instead of Sola Scriptura (The Bible alone)!

These are just some of the manifestations and bitter fruit of a race of people - the human race - which has removed itself far from the Law of God.  This is the Law that gives Life - eternal Life, but man has destroyed it...and himself in the process, because he has no concept of the wrath which is to come.

The good news is that this is one Law easier to keep than most! There is ONLY One God, three in essence but One God.
He is a jealous God in that He knows His Worthiness, Holiness and Perfection.
He has revealed Himself in the pages of the Bible.
When we are saved and brought into the Kingdom, we know these things.
When we are saved and see Him as He is, through His Word and the Spirit, we know He is the One True God and worship Him - ONLY HIM.
When we are saved, we see His Law as it really is - LIFE!
Glory to His Name!