COULD JESUS RUN FOR PRESIDENT TODAY?

WHAT IF JESUS CHRIST RAN FOR U.S. PRESIDENT: 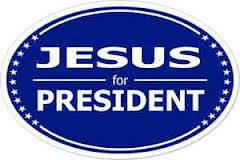 Can you imagine what the mainstream American media would do if the Candidate for President of the United States said the following in His position papers and campaign. The following is based on fundamental Biblical Truths - ABSOLUTE TRUTHS - but written tongue in cheek....to illustrate how far away from Christ we have shifted. The fact is Jesus will return as the King of all Creation, and do away with the world as we know it....and REIGN FOREVER IN ETERNITY - first for 1000 years in the New Jerusalem, then the Eternal State! Hallelujah!

""But don't begin until you count the cost. For who would begin construction of a building without first calculating the cost to see if there is enough money to finish it?Otherwise, when he has laid a foundation and is not able to finish, all who see it begin to mock him, saying, ‘This man began to build and was not able to finish.’ (Luke 14:28 NLT)
WHAT? This is not how we do things in America? We borrow it from the Communist Chinese, sell worthless bonds on paper, mortgage our grandchildren's future and then claim we brought the bacon home! They would then accuse Him of having no heart or conscience for the homeless and the hungry (even though He said "whatsoever you do for the least of these, you have done for Me!!!)!

TAXES:
"Well, then," Jesus said, "give to Caesar what belongs to Caesar, and give to God what belongs to God." His reply completely amazed them (Mark 12:17)
Because the Lord Jesus never engaged in Class Warfare, since He came on the scene, the Left would accuse Him of favoring the Rich and robbing the Poor to give tax cuts to Wall Street!  Jesus paid His taxes, but because He had Peter go take the Precious Coin out of the Fish's mouth, His opponents would accuse Him of hiding His money offshore (okay, that was a joke!)....(Matthew 17:27 "However, so that we do not offend them, go to the sea and throw in a hook, and take the first fish that comes up; and when you open its mouth, you will find a shekel. Take that and give it to them for you and Me.")

HEALTH CARE:
"Jesus instructed his disciples to have a boat ready so the crowd would not crush him. He had healed many people that day, so all the sick people eagerly pushed forward to touch Him (Mark 3: 9-10)
Jesus healed people for free. He did it everywhere. He based all of His healing on Faith (the woman with the blood issue, the Roman etc....). The Feds and all state licencing authories would accuse Him on national TV of practicing medicine not just without a licence, but of not using FDA-approved methods! Diane Sawyer and 20-20 would run a prime-time expose on this "Faith-healer" and is He really suited for the Highest office in the Land if He did not use the US Department of Health and Human Services regulations!

ISSUE 2
GAY "MARRIAGE"
-  “Have you not read that he who created them from the beginning made them male and female, and said, ‘Therefore a man shall leave his father and his mother and hold fast to his wife, and the two shall become one flesh’? So they are no longer two but one flesh. What therefore God has joined together, let not man separate.” (Matthew 19:4-6 ESV)
There goes the liberal elite in academia, Washington DC/New York/Chicago/LA and fake Christian mainline "churches". They would call the Lord Jesus intolerant and that He never said anything against homosexuality or "gay marriage" or even having more than one wife....never mind His exact quote here! The elite in our colleges and even in the declining mainline protestant denominations will call the Creator of Biblical Marriage intolerant, uninformed and not living in the 21st Century. They would say such things as "why shouldn't two people who love each other, get married" etc etc.....

ISSUE 3:
EVOLUTION
"In the beginning was the Word, and the Word was with God, and the Word was God. He was in the beginning with God. All things were made through him, and without him was not any thing made that was made. In him was life, and the life was the light of men. The light shines in the darkness, and the darkness has not overcome it (John 1:1-5 ESV)
Now He's done it! He claims He created the Universe and this earth and all living creatures. Why, this "religious extremist" thinks He even created humans! All PBS, NPR and every public school district, college, university and textbook manufacturer would form a Super Pac with gazillions of Taxpayer money to campaign against this uninformed Man! His political opponents would say that the Creator of Science "missed science class" or believes in the flat earth...which, er...He created ROUND! Brian Williams would run an NBC poll weighted towards the evolution crowd. Chris Matthews and Howard Fineman would decry the use of Faith in a campaign while the British Charles Darwin society would mock "simpletons" who believe in a 6000 year old "tale"!

ISSUE 4:
CULTURE WARS
If you look at a woman with lust in his heart, has already committed adultery. There goes the Hollywood vote....and just about every other cultural icon in this sleazy society). The counter-culture would immediately attack, accusing the Candidate of shoving His "Religion" and morality upon a "free" society. The Author of the Bible would be accused of Bible-thumping and Bill Maher would recommend the King of Kings go back to His Bible Belt!
To add fuel to the fire, He said in Mark 9:42 "Whoever causes one of these little ones who believe to stumble, it would be better for him if, with a heavy millstone hung around his neck, he had been cast into the sea!"
The Music/Media/Movie industries, the NEA, all the public unions and their liberal alternative lifestyle groups attack this candidate for not just intolerance but hate for, what they take as implying they are teaching and misleading and corrupting young children with indoctrination into immoral lifestyles, contrary to His Father's Word.

"Thou shall not kill" (Exodus 20:13)
Now He really did it! On the Abortion issue, now the US media has gone nuclear- not only does He not create or believe in an exception for rape, incest and the life of a mother, but He is against Women's Reproductive Rights and is an ancient, archaic and a typical Man....or male chauvinist! Every liberal commentator on MSNBC, CNN and their friends in Planned Parenthood; NOW; NARAL etc (which need no explanation) will call Him heartless, cruel and worse. (By the way, He does claim...and IS - the Ancient of Days!!!!)

ETERNAL LIFE
Jesus answered him, “Truly, truly, I say to you, unless one is born again he cannot see the kingdom of God.” (John 3:3 ESV)

The controversy around this Candidate continues to grow as He makes His most controversial "policy" statement of the campaign! He not only claims to know who was born-again, how many wives they were married to  and the sins they committed, but now liberal theologians; unitarians; 57% of evangelicals, the BBC, the United Nations and every media talking head call Him intolerant and wanting people to live up to the Ten Commandments and ignoring the Separation of Church and state...not to mention the Separation of the Goats from the Sheep!

UPDATE! NEWS ALERT! BREAKING NEWS:
Jesus Christ, claiming to be the Son of God has just run His most controversial campaign ad ever! Here is the text of it
"I AM THE WAY THE TRUTH AND THE LIFE...NO ONE COMES TO THE FATHER (AND THEREFORE HEAVEN) WITHOUT ME"
I am JESUS CHRIST, AND I APPROVE THIS MESSAGE!

Email ThisBlogThis!Share to TwitterShare to FacebookShare to Pinterest
Labels: brian williams, faith-healer, i am the way the truth and the life, i approve this message, millstone around neck, president of the united states, what if jesus ran for president