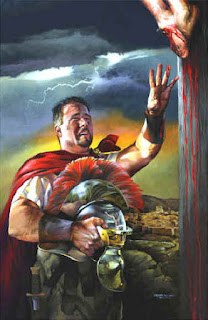 This is NOT a Gladiator movie title! This name may not sound familiar to most these days. But in the decades after the Crucifixion and Resurrection of the Lord Jesus Christ, Longinus' name became known in Christian circles as the Roman Centurion who became the first Christian. The incredible thing is that it happened right at the foot of the Cross, just seconds after the Lord said "IT IS FINISHED, FATHER, INTO YOUR HANDS I COMMEND MY SPIRIT"!

His name is not mentioned in the Bible, but discovered later in apocryphal literature which never made into the Canon of Scripture or the Bible! He is called the Centurion in Luke 23:47 "Now when the centurion saw what had taken place, he praised God, saying, “Certainly this man was innocent!”

Combine this account with the fuller description here from Matthew and we get a very scary, yet vivid preview of Future Events! Here is that passage: "And behold, the curtain of the temple was torn in two, from top to bottom. And the earth shook, and the rocks were split. The tombs also were opened. And many bodies of the saints who had fallen asleep were raised, and coming out of the tombs after his resurrection they went into the holy city and appeared to many. When the centurion and those who were with him, keeping watch over Jesus, saw the earthquake and what took place, they were filled with awe and said, “Truly this was the Son of God!” (Matthew 27:51-54 ESV)

Just briefly, we need to know who this Centurion actually was! He was the pagan Roman captain of 100 soldiers. Centurions were close to being the elite or the Marines of Caesar's army. Apart from Pilate, the Roman prefect of Jerusalem, Centurion had the most power. He was watching while Jesus rode into town on a donkey on Palm Sunday and saw the crowds hail Him as King.

He was there when the Temple Guard brought the arrested Jesus in after the Agonizing Prayers of Gethsemane, late on Thursday night. He and his men escorted Jesus to and from the perverted and corrupt Herod after Pilot declared Jesus to be innocent, several times. On the Day of the Passover or Good Friday, Centurion was there when he and his men mocked, kicked, spit on, blasphemed and criminally brutalized the Son of God.

They whipped Him so badly with the cat-o-nine tails with nails and bone chips at the end of the leather straps, that Isaiah 52 said He was barely recognizable as a man. Centurion was one of those persecutors. He and his men dragged Jesus through the Streets of the Old City up to Golgotha (The Place of The Skull), where he then oversaw his soldiers nail Jesus to the Cross.

All through this, Longinus saw a man who never said a harsh word or complained. In fact, He saw the Gentle Savior forgive his brutal Roman goons who were nailing Him to the Cross. Longinus saw a thief on the Cross repent, get saved and was told by Jesus that "today he will be with Me in Paradise". However, the clincher was what happened after Jesus actually died on the Cross.

Centurion saw the sky suddenly go black for hours. He saw earthquakes splitting rocks, just as will happen when Jesus returns. The Wrath of God was rained down on the Temple back in the City where not just the Veil was torn from top to bottom, but a now defunct religion was being buried - the one of the Law. Tombs were open and dead people were seen walking through the streets!

Fear and Trembling was the order of the moment. The reaction of the religious leaders who killed Christ and the prophets were to rally around their religious lifestyle, until Rome finally destroyed their Temple in AD 70, for good. But for Centurion, it was the Beginning! Combining both Luke's and Matthew's Gospel, let's note:

Because he (Centurion) was with Jesus, after seeing the Fury of God on those who killed His Son, he said "Certainly, this man was innocent" (Luke).
He was filled with awe (Matthew).
He praised God (Luke).

What does this mean for us? The most important thing is to note the progression of this powerful man - Centurion.
He observed.
He sinned horribly against God by brutalizing Him.
He observed the Suffering Savior.
He saw what repentance was (The Thief).
He saw the Wrath of God.
He reacted in awe at a man who never said a bad word about His killers.
HE PRAISED GOD! (Luke)....THIS ROMAN PAGAN, NOW SAVED AND COVERED BY THE BLOOD AND WATER WHICH FLEW OUT OF JESUS WHEN ONE OF HIS MEN SPEARED JESUS' RIBS, PRAISED GOD!

The Bible uses the same word for the Centurion praising God as we do for the DOXOLOGY (Praise God from Whom all blessings flow)! Longinus basically fulfilled what we know the chief end of man to be - "To Glorify Him and enjoy Him forever"! This gentile was the first Sinner saved and washed by the Blood and the first Christian in recorded history, at the death of our Savior. We would do well to live in awe and fear of the Lord, as he came to do!
Amen.
(Image courtesy Bing)
Posted by The Bernie Lutchman Blog at 4/16/2012