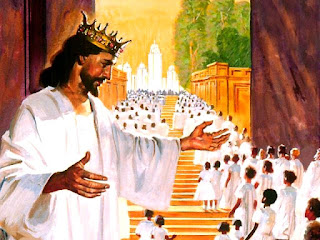 A Bible verse speaks to each of us in a different way at different times in our lives. While the verse itself has only one meaning - (that which the Lord meant to say) - each verse speaks to us differently, depending on our circumstances at the time we're reading it! This is the amazing thing about the Living, Breathing Word of God! There is no other Book like it, at any point in human history.

Some folks have a "Life verse", that which defines us and our walk with the Lord. The verse is also representative of our thinking and where we are at our sanctification. Our favorite verse could even show if we are being transformed into the image of His Wonderful Son Jesus...or do we think more in the flesh!  So without further ado, I wish to introduce you to my Life verse....what it says; what it means and how Scripture further interprets Scripture. My Life Verse looks forward to eternity and expresses my gratitude and total joy at just being allowed to be in the Presence of the Living God!

Now, my friends, is there any better thing you can think of?! Read on....


One thing have I asked of the LORD, that will I seek after: that I may dwell in the house of the LORD all the days of my life, to gaze upon the beauty of the LORD and to inquire in his temple......Psalm 27:4 (ESV)


Psalm 27:4 begins “I have asked one thing from the Lord.” If you have one thing to ask of the Lord, what would it be? Solomon asked for a heart of wisdom and he was blessed beyond measure. The wisest man who ever lived wrote the Proverbs, Ecclesiastes and the Song of Solomon. Solomon, the son of the man who wrote Psalm 27, asked for wisdom but his life of unimaginable wealth and ease, corrupted his morals and his soul so much; he forgot why he asked for it in the first place!
Therefore making a powerful request before the Lord comes with responsibilities. Do not make them unless you intend to fulfill them….or in other words “be careful what you ask for!”


The next phrase is “to dwell in the House of the Lord all the days of my life”. Does this mean to take your bed into the church building? No! The word “dwell” should be interpreted as “abide”. Jesus said in John 15: 4-7 “Abide in Me, and I in you. As the branch cannot bear fruit of itself unless it abides in the vine, so neither can you unless you abide in Me. I am the vine, you are the branches; he who abides in Me and I in him, he bears much fruit, for apart from Me you can do nothing. If anyone does not abide in Me, he is thrown away as a branch and dries up; and they gather them, and cast them into the fire and they are burned. If you abide in Me, and My words abide in you, ask whatever you wish, and it will be done for you”. (Emphasis mine)


If you are a Saved, Sold out, Sanctified Son or daughter of the Savior, you will know what He means by “abiding in Him” - STAYING IN HIS WORD!! NOT just a set quiet time each morning where you worship, wait and then go to work, but a daily constant walk with Jesus who is called the WORD of God (In the Beginning was the Word, and the Word was made flesh and dwelt among us, John 1:1). This walk is a lifetime spent of walking, talking, listening, worshipping, Praising Him in the Storm and discipling to Spiritual maturity.  You want to know Jesus? You wish to dwell in the House of the Lord all the days of your life? KNOW THE BIBLE!


The next phrase says “gazing on the Beauty of the Lord”. The Book of Revelation describes the awesome vision of the Lord Jesus as He looks right now (read Revelation 1:9-16).  There is a powerful artist rendition of the King when He returns in Judgment after the Great Tribulation which I suggest you look it. Click on this link: www.thekingiscoming.com  and look at the home page. Jesus is not in a manger anymore. That was 2000 years ago! All through this powerful final book of the Bible, the Majestic, indescribable visions of He who sits on the Throne and His Son are described in powerful detail.  This confirms what Isaiah saw when God took him up into His Own Presence in Isaiah 6:1 “In the year of King Uzziah's death I saw the Lord sitting on a throne, lofty and exalted, with the train of His robe filling the temple”.


Isaiah was so filled in amazement and convicted immediately of his sin, he fell down in front of the Throne and cried out “Woe is me, I am ruined!” (vs.5). We are not in Heaven yet, so we are not yet dwelling for eternity with Jesus in the presence of the Holy One and His Angels. However, we can still gaze on His Beauty by marveling at His Word; tasting His Word; praising and praying to Him; adoring what His Hands have made and awaiting His Return!


Finally “and seeking Him in His .”  Number 1: I would rather be a janitor in the of the Living God than a prince of this dying world. Number 2: The good thing about seeking Him is: He can be found! Number 3: Seek Him primarily in His Word and then through prayer. One note about praying – in order to seek Him properly in prayer, spend most of your prayer time listening, being quiet and allowing Him to reveal Himself to you. This is Biblical. Psalm 46:10 says “Be still and know that I am God.” (NKJV)


…  “in His ”. The Hebrew word which King David used here is “HEKAL”. This word actually means “Tabernacle”. Here is what the writer of Hebrews said about the Tabernacle, which God told Moses to erect: “who serve a copy and shadow of the heavenly things, just as Moses was warned by God when he was about to erect the tabernacle; for, "SEE," He says, "THAT YOU MAKE all things ACCORDING TO THE PATTERN WHICH WAS SHOWN YOU ON THE MOUNTAIN.”Hebrews 8:5 (emphasis mine).


The temple or tabernacle described in our Bibles is not church as we are accustomed to. This Biblical tabernacle is a mere copy of the real , where God and His Son will be residing with mankind in the New Heavens and Earth described in Revelation 21! I like to interpret this phrase also as Christ would when He told the Pharisees that He could raise the Temple up in three days, even if they destroyed it. Little did those ignorant men know He was referring to the Body – the of the Holy Spirit! So another way to seek Him in His Temple is to seek after Jesus in the actual Personhood of His Entire Being...right now, through Prayer, Praise and Bible study! Are you doing these things? If so, then double down and worship Jesus even more! It's great for the soul!


This  is what my favorite verse of Scripture means to me....and how about yours?! Pray about it and let the Lord show you a meaningful one, geared just for you, if you don't have one yet!
Amen.