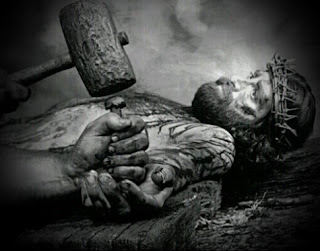 THE HAMMER THAT DRIPPED BLOOD....
Standing over the blistering heat of the fire, as sweat trails down his dirty face, the smith fans the blazing flames with his bellows. As he finishes the hammer he is working on, he gives it a thorough check, making sure it will meet the critical eye of the centurion. As a smith for the Roman army, all his work goes into the hands of the soldiers.


After the centurion picks up the ready tools from the smith and approves them, he sets out to deliver them to his soldiers. On his way, he gives the hammer to one of the best soldiers under his command. The soldier’s use of the hammer this day? Crucifixion duty.


The soldier has endured the burden of this duty before. He hates this gruesome task.


Under the strain of this assignment, he ambles his way to skull hill, better known as Golgotha, where he joins the centurion and the other three soldiers already there. Standing there chatting with them, he hears that three prisoners are coming to be crucified. One of the prisoners is his charge.


Standing there, he realizes that what he is about to do is the antithesis of the weather: it is one of those breathtaking, spring days that warms and rejuvenates the soul. Rivulets of white stream across the azure sky. A gentle breeze distills the fragrance of the flowering blossoms into the air.


Yet, impending gloom hangs in the air.


A large, jeering crowd, intermingled with a great many mourners, moves toward the hill on the Via Dolorosa. Three men bent under the weight of their own crossbeam trudge their way up the hill. A short distance behind them is another man, whipped beyond recognition, stumbling with agonized effort every step of the way. So disfigured and injured that another man carries his crossbeam for him.


This bloodied mess of a man now stands before the soldier. He wonders: Who is this man? What could he possibly have done to deserve this horrible beating? Surely, he wasn’t a soldier for he wears no hobnailed boots; he’s merely an ordinary sandaled man.


Sweat beads up on the soldier’s forehead. His heart races. His tongue sticks to the roof of his mouth.


The other soldiers, now finished crucifying their two prisoners, help tie the soldier’s prisoner to the crossbeam while the soldier readies his nail-spikes and his hammer. He bends down, steadies the nail in one hand and draws back his hammer in the other hand.


But before he can bring it down on the nail, he glances over at the prisoner. Peering at him, through the streaks of blood covering his face from the thorny crown twisted onto his head, are eyes of piercing kindness he has never seen before.


The centurion yells the soldier’s name, startling him. “Get on with it!”


The soldier turns his head away to focus on the nail. He forces himself to do the job he was ordered to do. His stomach churns and he feels like retching.


Completing the nailing of this man to the crossbeam, he looks down to see that he is splattered with blood and his hammer drips with the red life of the man.


The other soldiers fasten the man to the upright beam and the crucifixion is finished. The soldier looks up as he hears the man say, “Father, forgive them, for they do not know what they do.”


The soldier realizes now who this man is. Jesus. This is Jesus, the one everyone is talking about. Forgive? How can He forgive me for this horrid act?


He spins around as he hears the religious teachers and priests mocking this man on the cross. “He saved others, but he can’t even save himself! The King of Israel, is he? If he comes down from the cross right now, we will believe him! Let God rescue him now if he wants him, if he is the Son of God.”


One of the other criminals hanging next to this man Jesus says, “If You are the Christ, then save Yourself and us.”


But the other criminal rebukes him, “Don’t you even fear God as you’re dying? We surely deserve to die for what we’ve done, but this man? He hasn’t done anything wrong.” Turning to Jesus, he says, “Remember me when you enter your Kingdom.”


“Today, you will be with Me in Paradise.” Bowing His head, Jesus says, “It is finished! Father, I commit My Spirit to You.” And He breathes out His last breath.


“Surely, this was a righteous man,” says the centurion, shaking his head, and then solemnly orders the soldier to stand guard.


Stand guard? I just want to get out of here. What have I done? So distraught that he cannot bear to look up at the naked body of this man on the cross, he lowers his eyes to the ground. He notices the bloody hammer still in his hand. He throws it down and backs away in horror.


Shame overwhelms him. He falls to his knees in regret.


Another soldier picks up the hammer and tries to give it to him. “Here’s your hammer” is met only with silence and a stare. He won’t touch it.


The next morning, the centurion finds the soldier dead.


~The hammer that dripped blood? Had my name engraved on it.


“Living, He loved me; dying, He saved me;
Buried, He carried my sins far away;
Rising, He justified freely forever;
One day He’s coming – O glorious day!”


PRAYER: Thank You, Lord, for without Your suffering and death on the cross, I would have no resurrection joy! In my joy, I agonized over this post. I know you understand why. AMEN

Thanks so much, Bernie! I always appreciate your sharing. I do need to send you a new photo! LOL Easter blessings to you!

I love your new Emmaus article, which will be here next!! Looking forward to the new photo!! Lots of great folks read this article, Lynn!!!
New week - new blessings!!
bubba