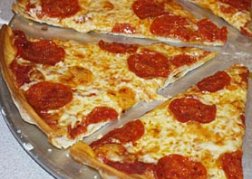 Survey after survey shows that Pizza is the most popular food in America! Contrary to popular belief, this perennial favorite actually had its origins in Ancient Greece where they used to call their flatbread by its Greek name "PITA"! Yes, that's where we got Pita Bread from.

Those famous old Greeks like Socrates, Aristotle and no, not Jimmy the Greek, loved to put olive oil and various natural toppings on their pita and devour it. All cultures eat bread, a universal food given by God. "Strangely enough" these various loaves of bread all look the same, no matter where you go in the world!

The Pizza we eat in America came from Italy. While the ancient Greeks used a lot of veggies on their flatbread, legend and a lot of historical records have it that about 1000 years ago, Italians were cooking circle flat dough and baked in the primitive ovens of the time with available toppings. These earlier folks had no idea what tomato sauce was because the tomato was not brought to Europe, until after the Spanish conquered Central and South America.

As we know and love it today in the west, our delicacy actually began in Napoli or Naples, where the moon hits your eye, like a bigga pizza pie! This "amore" with the pie was first coated with delicious extra virgin olive oil, sprinkled with garlic and mozzarella cheese and then baked! Believe it or not, anchovies was the favorite extra topping at the time!

The first pizza restaurant recorded in the western world was in Port Alba, Italy. Today, while we have the great pizza chains of America like Domino's, Pizza Hut and Little Caesar, the local mom and pop shop still have the best pizzas in town! The best pizzas are not necessarily to be found just in Little Italy neighborhoods, because anyone with a flair can cook them. The secret is always the sauce! It is source of delight!

Next the Crust has to be worth demolishing, otherwise people leave little round-edged bites on the table as they go pay their bills, on the way out of the shop. Of the various fast food chains in America, Domino Pizza still has the best tasting, most affordable and most choices for crust.  From hand-tossed to Brooklyn and Chicago deep-dish...they got it all.

The new phenomenon for families are the "Take and Bake" shops like Papa Murphy's. It's not only the most affordable for families but from thin crust Mediterranean with olive oil and feta cheese, to Texas-sized multi meats, a family of four or more, can munch heartily for less than $20. 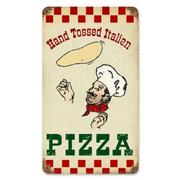 In a survey of American Pizza tastes, in 2011, the Food Network did consumer tests nationwide. This undertaking took them from California Kitchen types of pizza...to the famous Rush Street-styled deep dish (where Giordano's is the best) to the handtossed New York-styled pizza.  The winner, hands down - New York styled Thin Crust! Big time!

So, what a way to start the weekend after a long week of work, or classes or whatever is put in our way, as we live our lives! For the health conscious among us, definitely the low-carb New York styled with America's favorite - pepperoni - or sausage or whatever you wish. Whatever your tastes, as you chomp into your first bite, after holding that thin crust at a 45 degree angle with three fingers, give a hearty "Salud" to old Napoli and enjoy the Food of "Amore" (Love)!