IF I COULD TOUCH HIS HEM by LYNN MOSHER 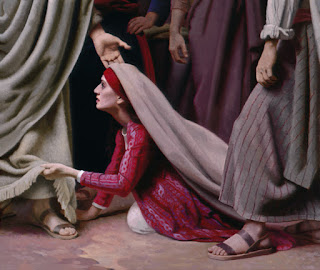 
Here she was, in the midst of a multitude of people, a place the Law forbade her to be. Why?


For twelve long years, she suffered with a condition, a hemorrhage of blood, one that the doctors could not cure. She spent all her money on their lack of knowledge.


Today, the rumor spread quickly through the local grapevine that the Man of God, Jesus, had just arrived.


And she heard the rumor: He was coming her way, within her reach.


Ostracized and considered unclean, she had been depleted of everything – physically, financially, relationally, and probably emotionally. But her faith remained intact, for she held onto the Scriptures. She clung to it, knowing this was her chance to touch the Man of God Who healed.


How did she know this? She was Jewish; she knew the Scriptures. She knew Jehovah-rapha from such scriptures as “I am Jehovah your healer” (Ex. 15:26 Masoretic Text), and “But to you who fear My name, the Sun of righteousness shall rise up and healing will be on His wings.” (Mal. 4:2 Masoretic Text).


And knowing the prophecies of the Messiah, she probably clung to these verses for dear life, “Surely He has borne our sicknesses and our pains…He was pierced for our transgressions, crushed for our iniquities; the chastisement of our peace was on Him; and with His wounds we ourselves are healed.” (Isa. 53:4-5 Mas Text)


However, I am sure one Scripture stood out in her mind, “In those days…men…shall take hold, and will seize the skirt of a man, a Jew, saying, Let us go with you, for we have heard that God is with you.” (Zech. 8:23 Mas Text)


Now, here was this Man called Yeshua, as the fulfillment of all the Scriptures. And “She said within herself, If only I shall touch His robe, I will be cured.” (Matt. 9:21 Received Greek Text)


Many images suggest that the woman crawled in the dirt to touch Jesus’ hem, but if she had, she would have been trampled to death. I wanted to title this: She Did Not Crawl in the Dirt! You’ll see why in a second.


People sometimes forget Jesus was Jewish, and He would have been following His Jewish heritage by wearing His traditional tallit or prayer shawl. According to the Code of Jewish Law, “Severe is the punishment of the one who neglects the performance of the Divine Command in putting on the tzitzit.”


God commanded the Israelites to make fringes or tassels on the corners of their garments that they would look upon them to remember all the commandments. The Hebrew word for fringe is tsiytsith or tzitzit. It also means a wing-like projection, a tassel, etc. Corners also means an edge, border, skirt, wing, etc.


The hem on the tallit was/is not as we know hems today. It was/is not just the end of the fabric turned under and stitched in place. The Greek word for fringe is kraspedon, which is translated hem and also means tassel, border, edge, skirt, etc.


There were/are strict rules for the construction of the knots and windings that made up (and still make up) the fringe. A tallit was/is treated with extreme respect; therefore, Jesus’ tallit would not have been dragging in the dirt. That would have been a disgrace.


Trembling, the woman flung her hand out, grasping the hem/fringe of Jesus’ garment. Immediately, Jesus stopped in His tracks, halted by a release of His power from her grasp of faith.


The Matthew account says, “But turning and seeing her, Jesus said, Be comforted daughter; your faith has healed you. And the woman was healed from that hour.” (Matt. 9:22 RGT)


The healing in His wings, in His fringe? In the making of the tallit, there were/are 39 windings of the fringe. Jesus received 39 lashings of the Roman whip for our affliction, for our healing!


When we realize the significance of the concept of the fringe to the early Hebraic mind, it becomes evident why this woman was instantly healed.


Are you a part of the crowd, just brushing up against Him, or are you seeking Him in the midst of all that’s going on around you? Does your faith press into His presence for all you need?


When health disintegrates, when money dissipates, when friends disappear, when the church and family disown you, what’s left? Your source of all the rest is Jesus and clinging to the fringe of His garment.


Jesus still comes today, in your direction, within your reach. He is passing by you today. Will you merely bump into Him, hoping something rubs off Him and onto you?


Or will you get close enough to reach out in faith to touch Him, to be made whole? Ask yourself: What will happen if I touch His hem?