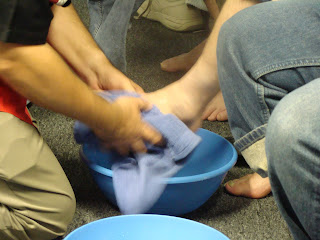 SERVE ONE ANOTHER AS HE SERVED US
While Wednesday was a day of preparation and relaxation for the King of Kings, it was the calm before the storm of the Day before Passover...and the Crucifixion! Four major events took place on this final Thursday (or Maundy Thursday) of our Lord's earthly Life.


Here are the Four Major Events in Order:
1. The Institution of Communion, and the New Covenant.
2. The Washing of the Disciples' Feet.
3. The High Priestly Prayer in the Garden of Gethsemane and His Agony (John 17).
4. The Betrayal of Jesus by the treacherous Judas.


Of these, the Washing of the Disciples Feet stands as a summation of WHY Jesus came to live and die as the humble, Suffering Servant. Anyone accustomed with Middle Eastern customs know that anything to do with feet - from shoes and sandals to washing dusty, dirty feet is the domain of the lowest of slaves.


Yet, here was the Creator of Everything in the Universe, on the ground with a basin of water, washing the same feet of sinful men. Of these men, one would sell Him out to be killed, one would deny Him three times, the rest would run for the hills and only one would stand up with Him on the Day of His murder - the Apostle John!!!!


In spite of everything, Jesus kept His Focus on WHY He came to earth. That mission of the Incarnation was to save Mankind and wash Him clean by the Blood shed on the Cross. This dying world will never understand or know the God Who would lower Himself from His Eternal Throne to do such a thing, but we do.


But it was not just the fact that the Foot-washing symbolized our Sins being Washed Clean by His Perfect Supernatural Blood, it was more! This was a demonstration of the type of people we will have to be, in order to be considered Children of the King. He or she never stands taller when we are our knees before Him, serving others.


By this act, we are called to put the needs of others ahead of ours. We are called to be Christ-like and tell others our testimony of How Jesus washed us of our own sins and why those, whom we serve like this, need to stop acting like Peter and allow such a washing. We are called to tell them that no one will enter the Kingdom of Our Lord, unless he/she accepts this gift from the Lord Jesus and are cleansed by His Blood.


Twenty years ago, while I was still a part of the Catholic church and a servant at the oldest cathedral in Hartford, Connecticut, I was part of a select group chosen by the head pastor of St. Patricks-St. Anthony's, Fr. Jerry Massimino, to have my feet washed on Holy Thursday night during Mass. I will never forget this privilege! While I am no longer a catholic, but an evangelical minister, it was awe-inspiring and humbling...and completely incredible, that a guy like me would be part of this ceremony, which the Lord instituted, right after He gave us the New Covenant In His Blood!


THE MAJOR EVENTS OF THURSDAY BEFORE THE CRUCIFIXION:
JOHN 13:


Jesus washes the Disciples' Feet
Jesus, knowing that the Father had given all things into his hands, and that he had come from God and was going back to God, rose from supper. He laid aside his outer garments, and taking a towel, tied it around his waist. Then he poured water into a basin and began to wash the disciples' feet and to wipe them with the towel that was wrapped around him. He came to Simon Peter, who said to him, “Lord, do you wash my feet?”
Jesus answered him, “What I am doing you do not understand now, but afterward you will understand.” Peter said to him, “You shall never wash my feet.” Jesus answered him, “If I do not wash you, you have no share with me.” Simon Peter said to him, “Lord, not my feet only but also my hands and my head!” Jesus said to him, “The one who has bathed does not need to wash, except for his feet, but is completely clean. And you are clean, but not every one of you.” For he knew who was to betray him; that was why he said, “Not all of you are clean.”
When he had washed their feet and put on his outer garments and resumed his place, he said to them, “Do you understand what I have done to you? You call me Teacher and Lord, and you are right, for so I am. If I then, your Lord and Teacher, have washed your feet, you also ought to wash one another's feet. For I have given you an example, that you also should do just as I have done to you. Truly, truly, I say to you, a servant is not greater than his master, nor is a messenger greater than the one who sent him. If you know these things, blessed are you if you do them. (Verses:3-17 ESV)

MATTHEW 26:
Institution of the Lord’s Supper
26 vNow as they were eating, Jesus took bread, and wafter blessing it broke it and gave it to the disciples, and said, “Take, eat; xthis is my body.” 27 And he took a cup, and when he yhad given thanks he gave it to them, saying, “Drink of it, all of you, 28 for xthis is my zblood of the3 covenant, which is poured out for amany bfor the forgiveness of sins. 29 I tell you I will not drink again of this fruit of the vine until that day when I drink it new with you cin my Father’s kingdom.”
Jesus Foretells Peter’s Denial
30 dAnd when they had sung a hymn, ethey went out to fthe Mount of Olives. 31 Then Jesus said to them, “You will all fall away because of me this night. For it is written, ‘I will gstrike the shepherd, and the sheep of the flock will be scattered.’ 32 But after I am raised up, hI will go before you to Galilee.” 33 iPeter answered him, “Though they all fall away because of you, I will never fall away.” 34 jJesus said to him,“Truly, I tell you, this very night, kbefore the rooster crows, you will deny me three times.” 35 lPeter said to him, “Even if I must die with you, I will not deny you!” And all the disciples said the same.
Jesus Prays in Gethsemane
36 mThen Jesus went with them eto a place called Gethsemane, and he said to his disciples, “Sit here, while I go over there and pray.”