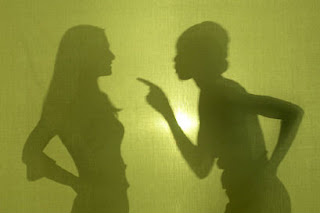 Bernie's Note: Yesterday we explored the unity we have as brothers and sisters in the LORD. I used Psalm 133 and its 3 short verses to demonstrate the beautiful image of Unity in the Faith and with each other, which God expects us to live in and with. Visit yesterday's post (Friday December 16) on that. Unfortunately, there is a spirit of divisiveness, even confusion in the Body. My sister LAURIE POPOVICH has written an excellent piece, which is worthy of our understanding....so that we not only "don't go there" but also "don't ride the divisive bandwagon!"
“Reject a divisive man after the first and second admonition...”
Titus 3:10
We all crave a sense of belonging.  It is our nature.  BUT division is the enemy of unity.
People have labeled since the beginning of time; religions, races, society, education, families, appearances, etc.   But NOT all labels are good.  Not all lines that are drawn are right. You must discern what is trying to being imposed on you; your own bias or that of another?  Labels on people and lines that are drawn are a result of seeing with your eyes and not your heart.
Don’t be quick to believe what you hear from others instead draw your own conclusions on people from the heart.
A believer doesn’t acknowledge the drawn lines and labels of the world.  They unite the with their sincere words and heart-felt actions.
You reject not the divisive man through hate; but for your own sakes,  for the guarding of your hearts and minds, for the guarding and keeping of peace and love.
Divisiveness is a cancer that spreads like wildfire and in the end you don’t want to be on its bandwagon. For the label of a divisive man/woman leaves a bad scar that is difficult to erase.
Don’t be known as divisive! Unite, be a light, and ALWAYS find and accentuate the positive!
(Image by Google Images)
Posted by The Bernie Lutchman Blog at 12/17/2011

Much appreciated your comments, there is a day coming Christ will divide from His left and right. Three quick comments then:
1. Christ's teaching via parable of tares & wheat very helpful for me on this subject!
2. I am always provoked by tower of Babel debacle and the ongoing curse of it.
Lastly, 'Honour all men. Love the brotherhood. Fear God. Honour the king. 1 Peter 2:17
May Christ bless you as you seek to feed His sheep via your writing.

Thank you brother Douglas! I appreciate your fellowship, iron sharpens iron attitude!! Praise God! You keep preaching the Truth as well...in love and Unity with the Trinity of God! Amen