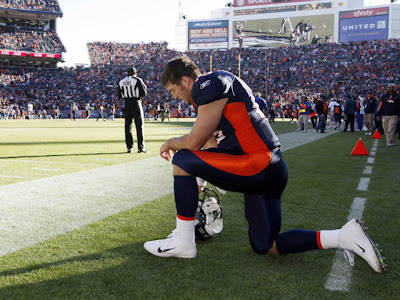 Very few athletes have been making as huge headlines recently than football's Tim Tebow and baseball's Albert Pujols. Both men have been known to wear their 'testimony' on their sleeves.


Love 'em or not, both men have people talking not just about their public professions of Faith in Jesus Christ. However, by doing so, they have invited more scrutiny on their individual lives to see if their talk matches their walk!


This is actually not a bad thing, as many a so-called "Christian Athlete" has fallen  hard on  their face, making all their talk about "Jesus is my Savior" a laughing stock to a cynical word.  Christian ministries are actually partially to blame for this, because they fall all over themselves, to hire this or that newly minted celebrity athlete, who happens to say that he believes in the bible or is a "christian"! I have yet to hear of some poor soul say that he/she got saved because Kurt Warner or Deion Sanders spoke at a Fellowship of Christian Athletes banquet!


The latest example is current Chicago Bears wide receiver Sam Hurd. After claiming Christ, the Bible and a picture perfect family life, the Feds just arrested him last week, for running a Cocaine/Marijuana ring worth millions of dollars! When he was arrested last Friday and charged, the news media led with the fact that he was a man who quoted the Bible and spoke to others in need.


Both Pujols and Tebow do not fall into this category because neither have committed any type of crime. However both men have to guard their conduct - personal and professional, because the reputation of Christ rests on it.


Baseball's Albert Pujols has already lost credibility. Last winter, when the negotiations started with the St. Louis Cardinals over the kind of money and contract he wanted, his reputation as the most God-fearing and loved man on the team, came into question. Many saw a different side of a man whom an entire St. Louis region put on a pedestal.


By the time CHRISTIAN DAY at the Park (Busch Stadium) came by on August 3, resentment against him was building. I was working at Gate 8 of the Cardinals-Rockies late game as we passed out baseball cards with 5 players's favorite bible verses at the back of it. I found out later this was universal, but Pujols' card was no longer the favorite! Sure this is anecdotal, but the fans already suspected he was not all he seemed.


These players - from Lance Berkman to Pujols - spoke somewhat eloquently about their so-called faith in Christ when the time for speechifying came before the remaining 8000 fans on that Christian Day. However, when the Cardinals won the 2011 World Series and each of these same men had the chance to tell the world about Jesus, not one of them - not Pujols or Berkman - said a thing. When it came right down to it, they thanked themselves.


This is the difference between these people and Tim Tebow. Tebow gives credit to Jesus, at the end of every touchdown or when he won those two NCAA Football titles at Florida. Pujols went on to sell out his standing in the eyes of God and man to the highest bidder, for a massive $250 million/10 year contract (massive for a fading star). After he sold out all those who looked up to him as some kind of saint, he said God told him to do it!!! The question is, did God also tell him to turn down the $230 million from the Miami Marlins or the $170 million from St Louis, where he already had a ministry and a base etc..??!!!


Tim Tebow was given a $2.5 million signing bonus last year, when he signed with the Denver Broncos Football team. He gave it all away! He is building a hospital in the Philippines where his Baptist parents are missionaries and has already said he gains more satisfaction in humanitarian work and missions than anything else.


He takes a knee publicly on the sideline and prays out openly after he scores or wins a game. This has begun a national phenomenon called "Tebowing". You are not going to believe this, but the practice of praying after a touchdown so openly has made Tebow a favorite with Orthodox Jewish Rabbis, of all people! They do not agree with his personal belief in Christ, but admire completely his devotion to God! This is the kind of effect a sold out man can have on the world.


The big problem for Tebow is - people are waiting for him to fall. Every man of God, who seems so perfect, has the biggest bullseye on his back.


He will be set up by those who will exploit his weakness for beautiful girls.
He will be watched as far as his lifestyle (re: alcohol, going out and any parties).
He will be a focus of stories from inside the locker room, as to "what kind of guy Tebow really is".
He will be examined with the media microscope from hell.
The same media who is putting him on the cover of every sports magazine and the top of every TV highlight, will go ape, to try and destroy him, if or when he makes even the most minor of slip-ups.


The thing for him to do, is when trials and temptations come, as they will to a young vibrant and single man, is to NEVER take his eyes of Jesus. Never lose his integrity and never stop praying with humility and fervor.


The other potential pitfall is his tendency to seek a limelight for his praise. Jesus said to go to your prayer closet and don't do like the pharisees. This is a special dispensation. It would be a lot better if he were to go back to the bench and pray obviously and not in such a flashy way, but Tebowing is what it is...and it IS Christ-honoring. May it continue to be completely real and may God continue to watch over His young whipper-snapper, Tim Tebow!