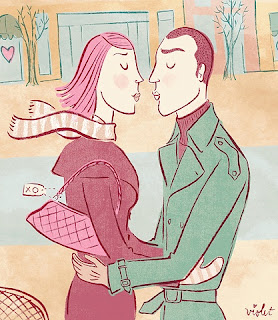 Almost from the moment of my salvation on December 15, 2002, I knew I'd write about the experience. God saved me and my marriage in one fell swoop. Things were awful, and then pow, in came Jesus. Here we are nine years later, happier than we were as newlyweds! Don't mistake me for a head-in-the-clouds Pollyanna though. The truth is, we still have bad moments. But. The dark times that used to define us as a couple have grown increasingly rare and short-lived.

Now they serve as measuring sticks. Our bad days bring to light how far we've come, how many prayers God has answered. It's a good story, full of romance, drama, heartache and God. It's funny. Most importantly, it shows what Jesus Christ can do. No mess is beyond his redeeming power. My purpose in writing is to offer hope to people (especially women) in troubled marriages.

Outside of one playwriting class in college, I've never studied writing. God has filled in the gaps, miraculously at times, providing tons of help for me along the way. I don't mean to suggest that these helps (mostly people: wonderful, long-suffering, talented friends) were provided as proof of a divine calling. I used to think so. Now, the very thought seems silly, even presumptuous.

Rather, I think this endeavor, like so many others, is one God supports as a method of drawing me closer to himself. It's about traveling the road together, no matter the destination. For almost a decade this book has been my project with Jesus, but if I let it go and move on to something else, that would be okay. The experience has taught me a lot about writing, and life. It has been a worthwhile use of time. And, it's been fun.

Wait. Back up. Did I say fun? After several false starts, now that the book is actually being written, edited, passed around and read by professionals—people who don't know me or my husband—some new descriptives have entered the mix.

Oh sure it's still fun, but also nauseating, humiliating, and terrifically tough. Writing the good stuff about people is easy, but this is a true story, about real, imperfect humans whose lives are marred by bad parenting and a host of psychological issues. The challenge has become, how much to tell. My goal is to glorify God, and yes, the shadows prove the sunshine.

Telling the truth doesn't make any of us look very good though, especially several in the story who don't happen to be me. People I love and respect. People who are are still very much alive. What's a girl to do? Fictionalize? Use yet another pen name? Write anonymously? None of these answers seems as good as simply telling the truth.

The God who fixed my marriage can solve this problem as well, so I will leave it to him. Just another bump in the road. Meanwhile, I've got to get back to work. One thing's for sure: this story isn't going to tell itself.